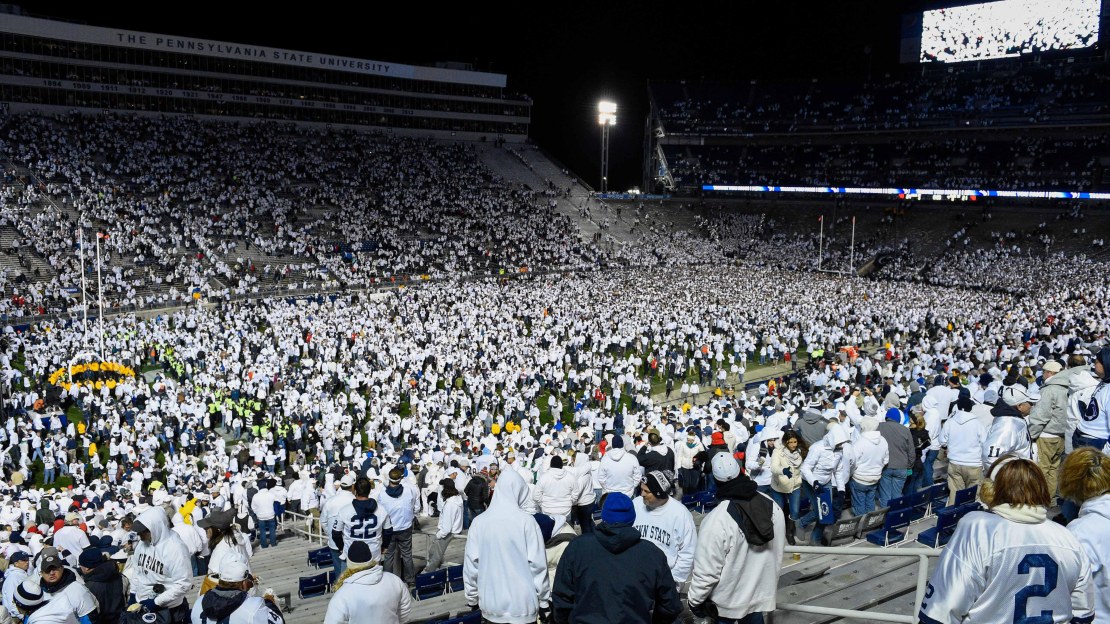 (AP) Nearly three years ago, James Franklin was charged with lifting a roster full of Bill O'Brien holdovers and dotted with veterans from the Joe Paterno era out of the darkest period in Penn State history.

It was a motley group of players, cobbled together with a handful of scholarships and a bunch of walk-on tryouts that took on added significance in the wake of harsh NCAA sanctions following the Jerry Sandusky child sex abuse scandal. Plenty of them were skeptical about the program's future considering the penalties and that they'd be taking cues from their fourth head coach in four years.

Linebacker Brandon Bell, an O'Brien recruit in 2012, admitted last week that when he committed, he didn't believe he'd be playing for a team that would be able to ascend the national rankings.

That uncertainty has faded in Happy Valley, where No. 20 Penn State will try to win its fifth-straight Big Ten game for the first time since Paterno's final season against Iowa on Saturday. The Nittany Lions (6-2, 4-1) will do so with everyone on the same page, a quality that eluded them in Franklin's first two seasons.

The Nittany Lions had to learn to do all three, especially after a pair of 7-6 seasons in which Franklin's teams went 6-10 in the Big Ten.

"I think Coach Franklin, all the coaches, they really were working on that the past couple years, the whole family and trust thing," offensive tackle Brendan Mahon said. "It took a little while for everyone to buy in, to be honest."

Once they did, the bonds began to show up on the field. They helped Penn State's young offense develop quicker than many outside the program thought and helped a shorthanded defense ride out a storm of injuries earlier this season.

It began in the summer when players like Bell and Mahon – two of 22 players recruited or signed in O'Brien's two years as coach – began to be more vocal. Bell, who had done most of his talking with his shoulder pads to that point, notoriously got on teammates for lagging on a sprint, failing to touch a line during conditioning drills.

"He said, `No, if we want to be the team we want to be, we have to run this extra one, make up for it,'" running back Andre Robinson said.

That kind of accountability is now commonplace and Penn State players are looking out for each other more on the field.

Many of his teammates were in awe of Trace McSorley's actions immediately after he tossed a game-sealing interception against Pittsburgh. Instead of sulking, McSorley ran over to the bench and threw an arm around receiver DaeSean Hamilton, who had dropped a potential game-winning touchdown pass just moments before.

The love between teammates showed up against Minnesota when kicker Joey Julius was felled with a cheap shot by a Minnesota player. As Julius lay motionless on the field, teammate Von Walker – also an O'Brien piece – immediately had to be restrained as he gave the offending Gopher an earful. The rest of Penn State's sideline soon followed before Franklin shooed them back to the sideline.

Many of the veterans have helped instill belief in their younger teammates, Franklin said.

O'Brien recruits and veterans like cornerback Jordan Smith, guard Derek Dowrey and defensive linemen Garrett Sickels and Curtis Cothran have had their playing time cut for various reasons but have continued to be vibrant presences and have made good on the snaps they've gotten.

"For the older guys, for them that's kind of been the constant here with all the coaching changes and everything that's happened, the guys in the locker room have always pretty much been the same as far as the kind of people they're hanging around with and who they're friends with and seeing every day."