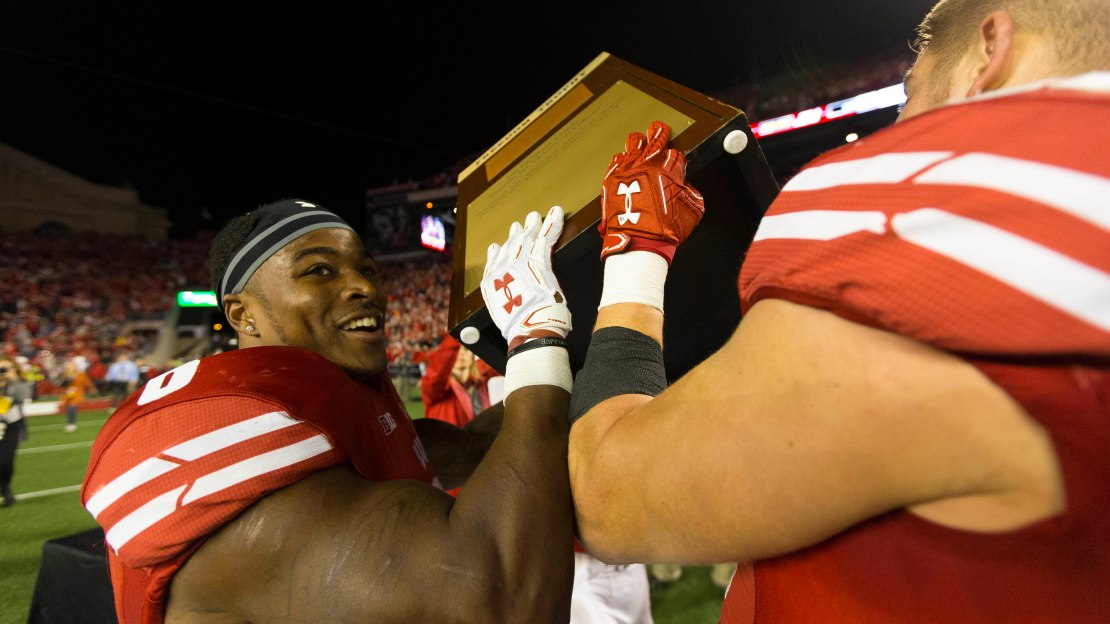 Michigan continues to show that it?s clearly the best team in the Big Ten. In fact, it?s now the only unbeaten left after Nebraska went down at Wisconsin. The Big Ten West race is gonna be fun to watch in November.

Here is a look at what happened this Saturday.

Biggest surprise: No big shockers on this Saturday. If forced to pick one, though, it would be Indiana posting three 100-yard rushers, including backup quarterback Zander Diamont, in its win vs. Maryland.

Biggest disappointment: No huge disappointment. Maybe it was Purdue allowing 62 points, the most ever to a foe in Ross-Ade Stadium. Also disappointing to see the Ohio State offense continue to plod along.

Play this again: The Nebraska at Wisconsin game lived up to the hype, as the No. 11 Badgers needed overtime to subdue the No. 7 and unbeaten Cornhuskers, 23-17, after UW missed a potential game-winning 45-yard field goal late. Nebraska never led and could never get control of the game but rallied from a 10-point fourth quarter deficit to force OT, as Wisconsin rationed the Huskers just 305 yards.

Never play this again: Penn State and Purdue were tied, 17-17, at halftime. But the Nittany Lions buried the Boilermakers in the second half, outscoring Purdue 45-7 en route to a 62-24 win. It was the most points Purdue ever has allowed at home.

Best play: In the last minute of the first half, Maryland WR D.J. Moore made a spectacular 23-yard TD catch, reaching high in the air and having the presence to get the toes of his left foot in the end zone. That gave the Terps a 21-16 edge at intermission. Alas, IU would rally to win, 42-26.

Best moment: Injured Wisconsin kicker Rafael Gaglianone joined the Nebraska specialists for their weekly pregame Sam Foltz jersey tribute Saturday night. Gaglianone was a friend of the late 2015 Big Ten Punter of the Year who died in a car accident in late July.

Did you see this? Michigan do-it-all star Jabrill Peppers did a little bit of everything in the Wolverines' win at Michigan State. The most exciting, perhaps, was when he recovered Michigan State's botched two-point conversion attempt in the final second and took it to the house, serving as the perfect exclamation point in the rivalry win.

Offensive Player of the Week: Penn State RB Saquon Barkley was a man among boys, running 18 times for 207 yards and two scores with an 81-yard TD jaunt and had three catches for a team-best 70 yards at Purdue. He averaged a cool 11.5 yards per tote.

Defensive Player of the Week: Indiana LB Marcus Oliver exploded to post eight tackles (seven solo), two sacks, 2.5 TFLs and a pair of forced fumbles in a 42-36 win vs. Maryland.

Special Teams Player of the Week: Michigan?s Kenny Allen hit all three of his field goals in a 32-23 win at Michigan State with a long of 45.

Michigan. The Wolverines keep on rolling. They avenged last year?s crazy home loss to Michigan State to take a 32-23 win at Michigan State with Wilton Speight hitting 16-of-25 passes for 244 yards. It?s the first time the Wolverines have been 8-0 since 2006.

Wisconsin. The Badgers eased by yet another top 10 team-their third of the season–taking down No. 7 Nebraska, 23-17, in OT. Wisconsin?s defense lived up to its hype, limiting NU to 305 yards as Tommy Armstrong hit just 12-of-31 passes for 153 yards with two picks. The Badgers were fueled by 223 yards rushing. This was UW?s fifth tough game to open Big Ten play: at Michigan State, at Michigan, Ohio State, at Iowa, Nebraska. The Badgers went 3-2. Not bad. At trip to Northwestern is next.

Penn State. The Nittany Lions have won four in a row, trouncing Purdue, 62-24, a week after scoring that huge upset vs. Ohio State. Will Penn State-which had 511 yards–lose again? Maybe not.

Indiana. The Hoosiers notched what may have been a must-win to stay on course for a bowl, knocking off Maryland 42-36 to end a three-game losing skid. IU had 650 yards of offense, including 414 on the ground.

Minnesota. The Gophers have won three in a row after dropping games at Penn State and vs. Iowa, becoming bowl eligible for a fifth season in a row. The Golden Gophers are in the race in the West with games left vs. Purdue, at Nebraska, vs. Northwestern and at Wisconsin.

Illinois. That?s six losses in seven games for the Fighting Illini, which had just 245 yards vs. Minnesota and committed three turnovers that led to 17 points. QB Jeff George made his second start in a row, hitting 16-of-34 passes for 156 yards with a TD in a 40-17 home loss.

Nebraska. The Cornhuskers saw their 7-0 record smudged, falling 23-17 in overtime at Wisconsin in what many viewed as NU?s first real test of the season. The offense floundered with just 305 yards. Up next is a trip to Ohio State.

Purdue. Another week, another loss. The latest was an embarrassment, as the Boilermakers got crushed, 62-24, the most points Purdue ever has allowed in Ross-Ade Stadium. Until the Boilers figure out how to run and stop the run, they have zero shot to improve. PSU outrushed Purdue, 257-46. In its last two defeats, the Boilers have been outscored, 62-7, in the second half.

Maryland. The Terps were unable to clinch bowl eligibility, falling 42-36 at Indiana. Now, Maryland may have to wait until the season finale against Rutgers to finish the job with the next three games being at Michigan, vs. Ohio State and vs. Nebraska.

Michigan State. A miserable season marches on, as the Spartans are now 0-5 in the Big Ten after a 32-23 home loss to Michigan.

100, yards rushing for Minnesota?s Rodney Smith on 20 carries with two TDs. This is his third 100-yard rushing game in succession.

142, yards rushing for Maryland?s Ty Johnson on 13 carries with a TD, as the Terps had 269 yards on the ground.

165, yards receiving for Michigan?s Amara Darboh on eight catches. That was a career high.

120, yards rushing for Wisconsin?s Dare Ogunbowale, who carried 11 times with a TD.

139, yards rushing for Michigan State?s LJ Scott on 22 carries with a TD.

6, losses in a row for Michigan State. This is the longest losing streak for the Spartans since they started 0-7 in 1982 — not including forfeits from 1994.

11th, player to amass over 11,000 yards in the Big Ten, a threshold Nebraska?s Tommy Armstrong passed at Wisconsin.