Illinois grads' invention may just be the cast of the future: BTN LiveBIG 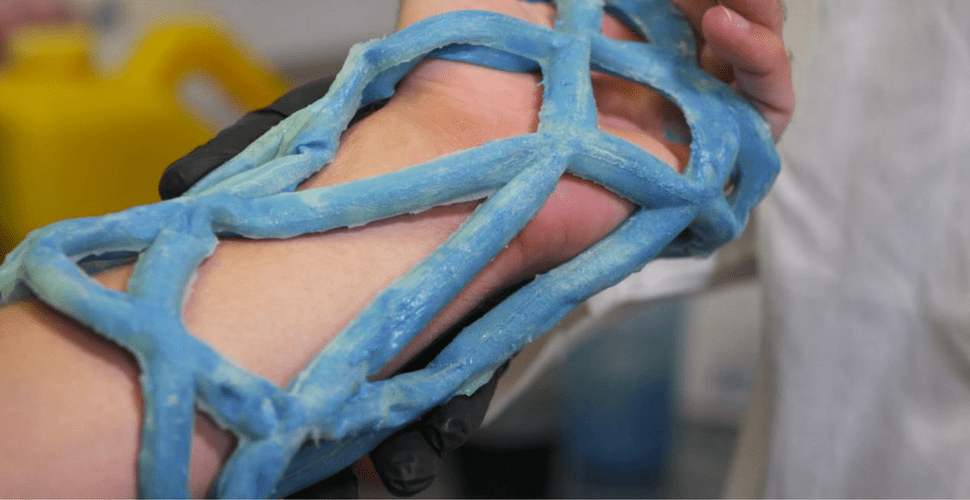 Troutner, a University of Illinois mechanical engineering grad, was born with bilateral clubfoot, a condition commonly treated with plaster castings of an infant's foot. He went on to compete in gymnastics, a sport where broken bones are no rare occurrence.

"My memories of a cast are standing in a shower with my hand covered in a bread bag and duct tape trying not to get the thing wet," remembers Troutner. "Then, still, after taking all of these precautions, still having to deal with that itchiness and that odor that's inevitable with the existing technology."

The problem is that although the modern cast is constructed of tape filled with a waterproof fiberglass resin, the underlying padding absorbs moisture. Water, sweat, bacteria and heat are trapped next to a patient's skin. This can lead to irritation, itching and abrasions that go untreated under the cast.

In 2015, Troutner and his partners at UIUC - Ashley Moy, a bio-engineering major, and Justin Brooks, an electrical engineering major - were looking for an idea for a unique inter-disciplinary senior design project. The group knew they wanted to focus on medical device technology, and brainstormed a list of problems that current medical devices had. They soon settled on a device that they were not only familiar with, but knew was riddled with flaws.

"We decided to design a cast that was waterproof," says Troutner, "but also had a more open structure so it wouldn't trap any debris against the skin."

The team's design, the Cast21 system, is an innovative, affordable, and relatively easy-to-use alternative to fiberglass casts. It consists of a stretchy, silicone sleeve in the shape of a helically wound braid that is placed over the set bone. A liquid resin is injected into the hollow tubes of the sleeve. When the resin hardens, the patient is left with a rigid, waterproof support structure.

Cast21's open construction also allows physicians to address another common complaint about casts: the muscle atrophy that can occur from limited or total lack of movement. It was a nuisance for Troutner, who found that returning to the pommel horse after having a cast removed often required weeks of extra exercise and physical therapy to regain lost muscle.

Electrical engineer Brooks found a way to allow patients to exercise their muscles while still healing the bone. "My task was to design a unit that could use electrical muscle stimulation and vibration therapy in a low power unit," says Brooks. "My device ended up being one that you could remove and add on for thirty minutes a day, every other day."

At this point, Cast21 has evolved beyond its origins as a humble senior design project. Moy, Brooks and Troutner are working with a team of business advisors to create a marketable device.

The trio is currently test-marketing Cast21 with physicians, and, as Brooks notes, the responses have been optimistically curious, given how famously reticent doctors can be to embrace new techniques.

"That's how doctors work; they're incredibly cautious," notes Brooks. "Then we walk them through the process and it's very interesting to watch them realize, this is not just a slight improvement, this is completely different. Every single one of them, at this point, has said, 'Keep us updated, we want to know when this is ready to go to market.'"