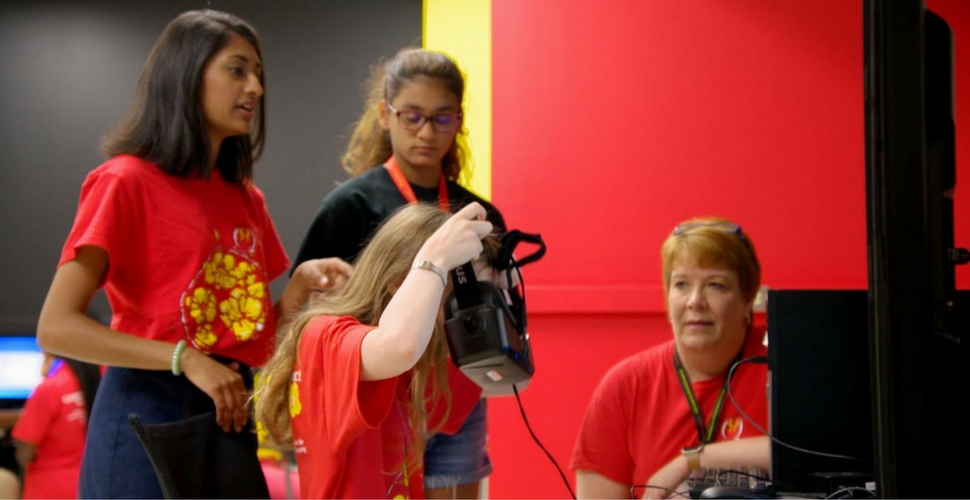 Ah, summer camp! Who can forget the nature hikes, the campfires, the arts & crafts, the field trips to the Glenn L. Martin Wind Tunnel?

If your memories of camp don?t include touring one of the premier wind tunnel testing facilities in the nation, that?s probably because you didn?t go the University of Maryland CompSciConnect Camp.

CSC Camp is a multi-year summer program run by the UMD Department of Computer Science. Its goal is to foster interest in computer science among middle schoolers, specifically those students who are traditionally underrepresented in the field, namely women and people of color.

As Jandelyn Plane, director for the Maryland Center for Women in Computing, explains, it is crucial to reach youth who show an interest in computer science at a pre-high-school age.

Literature shows that when people from underrepresented populations are leaving elementary school, they appear to be just as interested in STEM. But by the time they?re coming to the university, we have very few from those populations coming [into computer sciences.] The real problem is that in high school they don?t take the right courses and get more interested. If we can bridge those years to get them excited about computing, and then maintain it throughout the whole year, then they are likely to come here.

To encourage that excitement, campers develop their skills in computer science in progressive tracks over the course of the three-year program. For example, in year one campers are introduced to drag-and-drop website development. Then, over the course of years two and three, they begin to experiment with HTML, Java Script, and sophisticated game engines like Unity 3D.

There are also field trips to places that broaden their perspective on the work of a computer scientist, like the aforementioned Martin Wind Tunnel, NASA?s Goddard Space Flight Center and the NSA?s Cryptologic Museum.

Summer inevitably comes to an end, of course, but campers continue with their exploration of computer science year-round via monthly workshops. In the fall, they present what they?ve worked on over the summer to an audience of parents and sponsors. In the spring, campers gear up for the summer ahead by previewing upcoming curriculum.

Spring also means a chance to demonstrate their skills at Maryland Day, the university?s annual celebration of all things UMD. Plane says she?s been amazed by how the camp has instilled an enthusiastic love for computer science in the campers.

?They would go talk to total strangers and say, ?Do you want to learn how to program a robot?? They would talk to adults; teach the adults. They?re just as confident as [anyone].?