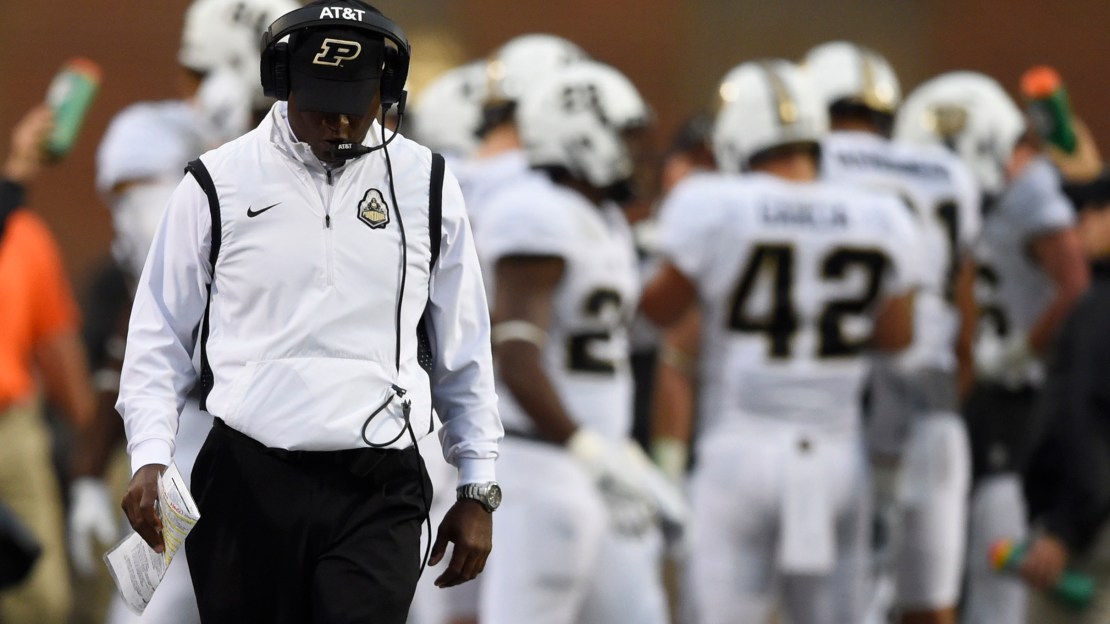 Finally, mercifully, the Darrell Hazell era has ended at Purdue.

In a move that everyone expected was coming, Purdue fired the fourth-year coach–first reported by GoldAndBlack.com. Now, the program and new athletic director Mike Bobinski can get busy looking for a coach to turn around what has become arguably the worst program in the Big Ten.

Purdue got off to a 3-3 start (1-2 Big Ten) this season, offering a hint of optimism after Hazell had radically altered his staff after the 2015 season. But the nadir–well, at least one of many nadirs–came in an embarrassing 49-35 homecoming loss to Iowa on Saturday. The Boilermakers weren't competitive-and they didn't look prepared. It was an abomination on every level. Had Purdue made any progress in three-plus seasons under Hazell?

The answer to that question was an emphatic "No."

Many felt Hazell never should have returned for the 2016 season, but his $6.6 million buyout was too rich for Purdue's blood to pony up. And A.D. Morgan Burke's pending retirement also was a factor in waiting. So, Hazell-whose deal ran to 2018–was back. Now, he's gone with a smaller buyout, a 9-33 overall record (3-24 Big Ten) and too many low-lights to recount.

Hazell's hire was an absolute abomination. He was the worst coach in Purdue history. In fact, his tenure will go down as one of the worst in the history of the Big Ten-and arguably the most disastrous since Rick Venturi's went 1-31-1 at Northwestern from 1978-80.

Hazell arrived in West Lafayette from a successful two-year stint as coach of Kent State, going 16-10 overall and 12-4 in MAC play, winning the MAC East title in 2012. That was enough to impress Burke, who had fired Danny Hope after the Boilermakers had gone 6-7 and played in a bowl in 2012. But Hazell never came close to sniffing the postseason after Hope went 22-27 overall and 13-19 in the Big Ten with two bowl teams after taking over for Joe Tiller in 2009.

In fact, of his nine wins in West Lafayette, only five came vs. FBS foes: Western Michigan, Illinois (twice), Nebraska and Nevada. His other wins came vs. FCS opponents.

Hazell's teams never had an offensive identity and were inept and horrifically awful on defense. Special teams did their part to ruin the party, too. And his staffs often were overmatched. On top of it all, Hazell didn't distinguish himself as a recruiter, either, while lacking personality, charm or charisma. He never connected with fans.

Now, Bobinski-hired this summer from Georgia Tech to replace the retiring Burke–can go about trying to find a savior. And, make no mistake about it: He can't swing and miss on this hire. Purdue's athletic department isn't flush with cash, thanks largely to a woeful football program that has left the fan and alumni bases frustrated, upset and disinterested. There is a hopelessness and malaise around the program, as apathy has become the norm.

The result has been a sea of empty seats on Saturdays in Ross-Ade Stadium-leaving Purdue's coffers starved for money.

Purdue has been on a downward trajectory since Tiller's last season in 2008, when Purdue went 4-8 overall and 2-6 in the Big Ten. The Boilermakers have had one winning season-7-6 in 2011-since 2007. But Tiller showed you can win at Purdue, as he took the program to 10 bowls in 12 seasons with a Big Ten title and Rose Bowl appearance in the 2000 season. Tiller retired as Purdue's all-time winningest coach with an 87-62 overall mark and 53-43 Big Ten record. His arrival was a boon to the athletic department and resulted in a Ross-Ade Stadium renovation in the early 2000s.

Purdue needs to make a hire that will give success-starved fans reason for optimism. But it needs a coach of substance more than a slick personality who will "win the press conference." (Remember the Fred Akers era, Purdue fans?) The Boilermakers need to get back to their passing roots and hire an innovative offensive coach.

The school is famous for being the "Cradle of Quarterbacks," producing the likes of Len Dawson, Bob Griese, Mark Herrmann, Jim Everett and Drew Brees, among other noted signal-callers. Purdue's new coach should embrace that heritage with a pass-oriented offense that is fun and exciting. And it needs a proven coach. This is no time for the school to hand the reins to a first-time head coach. If big bucks have to spent on hiring a coach, then big bucks need to be spent. In life, you usually get what you pay for.

The job has some appeal. Purdue is a top academic institution whose degree is valued. And the school plays in the Big Ten West, which is a winnable division that lacks the heavyweights of the Big Ten East. And the school is in the midst of building a $60 million football complex.

This is a critical juncture for Purdue's athletic department. The future is now. The Boilermakers need a home run hire.