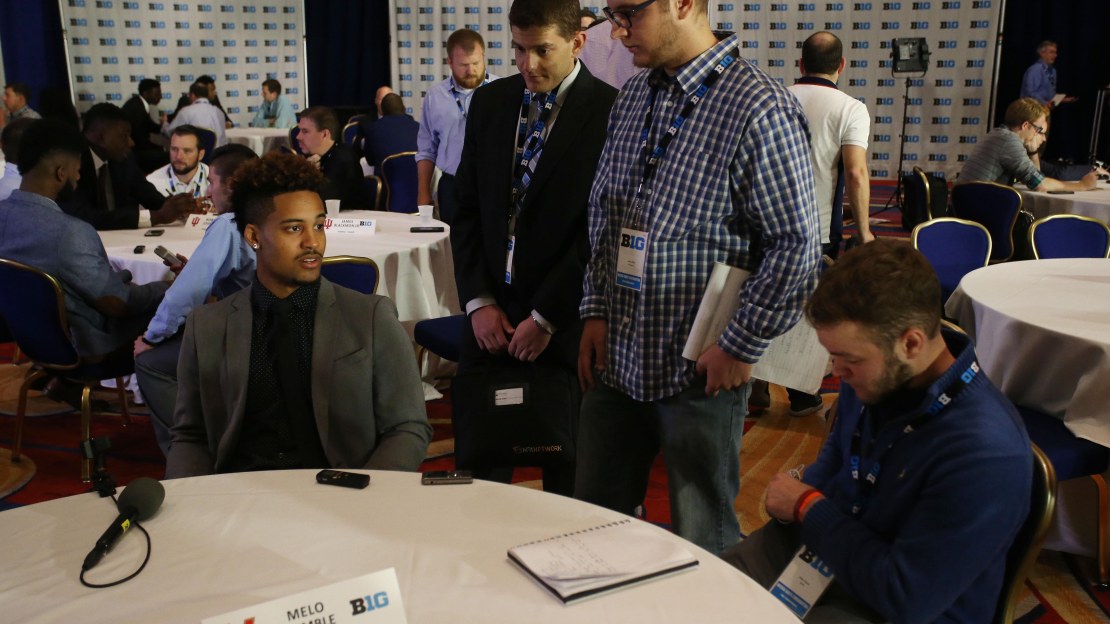 There were many familiar faces at this year's Big Ten Men's Basketball Media Day, and quite possibly more than there would have been were it not for a new NCAA rule.

In January the NCAA announced it would set a last-chance date of May 25 (10 days after the NBA Combine) for NBA hopefuls to withdraw from the NBA Draft. Most importantly, the NCAA eliminated the limit on the maximum amount of times a player could enter the draft, which previously stood at one.

Prior to January, underclassmen had to choose definitively whether to stay in school or enter the draft and lose any remaining eligibility.

The new rule meant underclassmen could now declare for the NBA Draft, test their skills and be evaluated by general managers and scouts leading up to the Combine, and return to school if they didn?t like their chances of being selected.

Overall, more than 100 college basketball players put their name up for consideration this past spring, and roughly 70 players were invited to the Combine. So far, the rule change has been well-received by players and coaches alike.

?At the end of the day, I think it gives the player the best possible platform to see where he can be drafted, so that?s a good thing,? Northwestern head coach Chris Collins said.

Eliminating the uncertainty that plagues many ?tweeners? -  players who have a shot at getting drafted but could just as easily be passed up on Draft Day - is one of the major benefits of the rule, as NBA hopefuls receive straightforward and detailed evaluations about their stock heading into the summer. Players are also allowed to work out once for each of the 30 NBA teams, which helps gauge mutual interest.

?When Pete (Jok) ultimately decided to come back (to school), he came back without any trepidation," Iowa head coach Fran McCaffery said. ?And I think you had a lot of players in the past that either went with trepidation or came back with trepidation. So now you have guys that are happy to be in college and those that are successful in the NBA.?

Jok suffered a thumb injury while working out and testing NBA waters, and he said the injury cemented his decision to return to Iowa.

However, even with the option available, some players elected to forego the process entirely and devote their energy toward their teams on campus. Illinois senior Malcolm Hill, Indiana sophomore Thomas Bryant and Purdue junior Isaac Haas all have legitimate NBA potential, but all three chose to skip the process entirely. Specific reasons will always vary from player to player, but all three expressed a desire to improve their games before making the leap.

Collins, McCaffery and other coaches acknowledged the new system isn?t perfect, pointing to the uncertainty the process can cause if a player hasn?t made a decision close to the deadline. Coaches generally want to have their rosters for the next season set well before late May, so the rule can pose challenges.

?Is the setup better than what it was? Yes,? said Purdue head coach Matt Painter, who stressed he always will do what?s best for his players first. ?I do think the setup is better. Are there still some things that there?s a downside to? Yes there are.?

Decisions to enter even vary within teams. While Haas chose to stay home, his teammates Edwards and Swanigan both submitted their names and worked out for pro teams.

?Allowing kids to come back to school, I feel like it?s going to save a lot of kids? careers,? Swanigan said.

Trimble and Hayes are widely regarded as two of the league?s best players and are Preseason All-Big Ten selections. Both were seriously considering remaining in the NBA Draft, but felt from their evaluations that they needed more seasoning in college. It will be a treat for Big Ten fans to see them back in action, and motivation for them and the rest of their peers chasing pro dreams.

?It was a good process,? Trimble said. ?I had fun while I was doing it, I learned a lot. And now I know what it takes to be in the NBA.?