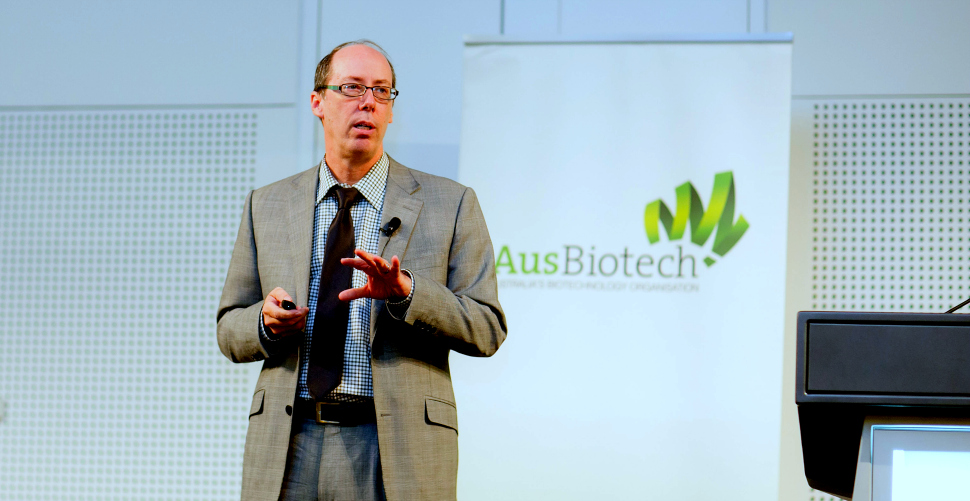 It would not be a stretch to say Jack Bobo knows more about food and agriculture than anyone else in the world.

The Indiana University alum holds five degrees from the university and spent 13 years in the U.S. Department of State, most recently serving as Senior Advisor for Food Policy. Last year, he left public service to take on the role of Chief Communications Officer, Senior Vice President at Intrexon, a synthetic biology company that focuses on solving global problems. Its latest project involves genetically modifying the mosquitoes that pass along the Zika virus in order to halt the spread of the disease.

Bobo spoke with LiveBIG about the state of global agriculture today as well as his decision to join the private sector. The following is edited for space, as his knowledge could easily fill volumes.

BTN LiveBIG: What are the most pressing issues in agriculture right now?

Jack Bobo: Let me start from the negative. In terms of land, 40 percent of all the land that can be used in agriculture is used today. There?s nothing bigger and clearly it?s as big as we want it to be.

In terms of water, 70 percent goes to ag. You look at the Colorado River, it no longer flows to the sea. These aren?t what?s happening down the road. They are the problems of today. Water is an important issue.

Around 90 percent of what we read in newspapers talks about energy policies. Yet agriculture is just as big. Wind and solar get way less return on investment. Every dollar you invest in agriculture you get $1.43 back. That?s a positive return. So generally farmers don?t want to talk about the impact on climate change because that makes them look like the bad guys.

Agriculture is a very sensitive issue. There?s probably nothing more important to the environment.

BTN LiveBIG: You say we need to get to the year 2050 if we want to survive. What makes that date so special, what do we need to do to get there and how will things get better if we do?

JB: In 1950, the average woman had five children, today it?s more like 2.5. Projections show that 2014 was the year of the peak child. Why is that? The biggest thing is health and nutrition. As soon as children don?t die, women tend to have fewer children.

We have to produce food at a high rate today, but we won?t have to [produce] nearly as much in 2050. If productivity goes up and you don?t need food, it decreases need for agriculture. By 2050, for the first time, we won?t need as much food. So if you use 50 percent less water, you really are using 50 percent less water.

The next 35 years are not just the most important in the history of agriculture, which they are, they?re the most important that there will ever be. So if we get to 2050 without cutting down our forests or draining our lakes and rivers, we?ll be OK. If not, we?re screwed.

BTN LiveBIG: How can we produce enough food to feed the planet going forward?

JB: Some people say we could greatly decrease the amount of food waste out there. The problem is it?s not that easy to get food waste out of our systems. Food waste in meat is different from tomatoes and apples. And you have it occur at different points in the system. When you think about livestock, your parents were probably trimming the fat off steaks. If you buy a steak today, there?s no fat. It?s all being trimmed. Every single scrap is being used for something. There is no more food waste in livestock industry pre-consumer. So they squeezed it all out. It?s absolutely going to help, but it?s not going to solve the problem. Throughout history, there has been economic interest to eliminate food waste. It?s not as if anybody has ever had incentive to waste food. If it was that easy, it would have been done.

BTN LiveBIG: Do you have an optimistic outlook on the future of feeding the world?

JB: I?m a science optimist but a regulatory pessimist.

BTN LiveBIG: Has the term ?organic? lost its luster a bit?

JB: It?s a philosophical approach about how food should be produced. If you look at the CO2 emissions, the organic farm is going to have a lower emission. But per tomato grown, the conventional farmer is going to have a lower emission because it?s producing more. There aren?t right or wrong answers. Part of the reason organic has lost its luster is that it?s simply too common. The people who originally grew the organic movement, it was people on the fringe of society who wanted to grow their own food. When it took off, people bought into the hippie vision. They turned it from a niche product to a mainstream product.

I think it has a lot to do with it being so common and people are looking for the next cool hip thing.

BTN LiveBIG: So are you a proponent of GMO or food biotechnology?

JB: I?m a proponent for greater science and technology in our food system. I believe we?re faced with either growing more food on less land or less food on more land. I believe science is critical. That?s one of the roles in helping to produce more food. Those options need to be available for farmers.

Farmers and companies have been doing these things, not because anyone was forcing them, but because they made more money and were better off because of sustainable practices. I would say the absence of clear consumer benefits (of GMO foods) has undermined the conversation. If you don?t see something that?s in it for you, it?s not surprising that you would oppose it.

So what we really need are GMO crops where people say, ?Hey that?s a fantastic product and I want it because it?s better.? My thinking is a simple product with a clear benefit would give people the chance to choose that product. They might not choose it, but I think they would.

We?re born to worry and we?re going to worry about something. As our food has gotten safer and safer, we?ve looked for new things to worry about. Who wouldn?t prefer something natural to something that?s not natural?

When we say natural we just think about the happy thoughts. Not all the bad things. When I say GMO, negative things come to mind, even though beer and wine and so many other things have GMO.

BTN LiveBIG: How can we make kale taste better?

BTN LiveBIG: What would you consider your greatest achievement in your work with the state department?

JB: I spent a lot of time working with Africa and then Asia and Europe. I traveled to about 60 countries in 13 years. I spent a lot of time trying to make people more aware of the future of food and agriculture, the role of science and technology and how to better communicate it to the public.

BTN LiveBIG: What made you decide to leave the State Department and join the private sector?

JB: In many ways, I had one of the best jobs in the government. My view was I wouldn?t leave unless I would have something more important and have more fun doing it. This builds on all the things I?ve done in 13 years in the state department and my time at IU. This company was doing a lot in science, but not communication. So that?s what enticed me and convinced me it?s the right move for me.

JB: For me that was one of the things that has important impacts as well as being environmentally sustainable. The role is to solve many of the problems through the application of science and technology.

While Zika is the subject of the day, more than 400 million people get dengue fever and it?s the same mosquito that delivers all of these. In each of these sectors we?re having a pretty dramatic impact. This really allows me to draw on my entire IU background (with degrees in biology, chemistry and environmental science). All of those things factor into the work that you do every day. It?s a pretty good place to be.

BTN LiveBIG: Talk about your time at IU, how it shaped who you are and what you have achieved

JB: I was very multidisciplinary in my studies and it worked well with what I wanted to do.  I was there as an undergrad, went into the Peace Corps and came back as a grad student. I?d like to think that?s a good sign that I came back for another time. As I was looking at graduate schools, it really wasn?t what I was thinking for my studies. I looked around and I knew already I was interested in doing a joint environmental science and public health or law degree. I looked long and hard for joint degree programs of my interest and to my surprise I couldn?t find a better program. I could have gone somewhere else and spent more money, but they wouldn?t necessarily have been a better program, they would have just been more expensive. It made a lot of sense to go back.