Dienhart: Iowa's win at Minnesota needs to be underscored 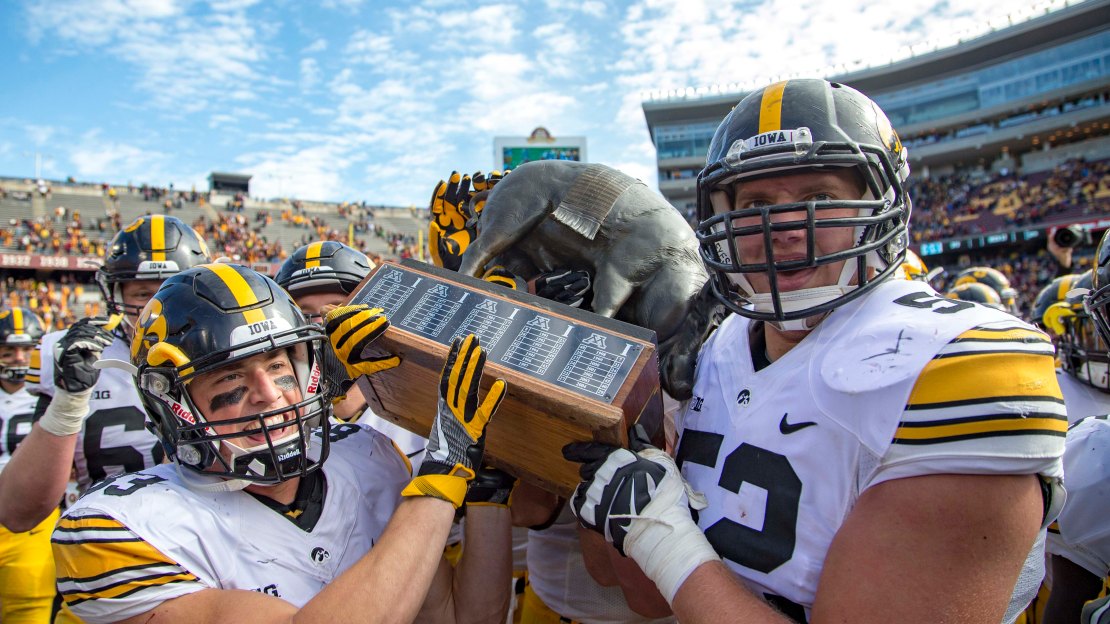 Iowa may have just saved its season.

Is that an overstatement in the wake of the Hawkeyes? hard-fought 14-7 win Saturday at Minnesota? Perhaps. Still, the magnitude of this win for Iowa needs to be underscored.

If Iowa goes on to repeat as Big Ten West champs, the Hawkeyes (4-2, 2-1) may look back on this battle for Floyd of Rosedale as the seminal moment, a turning point in a season that was threatening to go off the rails. Lose, and the Hawkeyes would have been 1-2 in the Big Ten, looking way up at rival and 2-0 Nebraska.

?It?s big,? said Iowa QB C.J. Beathard. ?Being able to win a close game, we needed this one. We needed to get back to winning, what it feels like to win, and celebrate in the locker room."

Mission accomplished. But for over three quarters, the Iowa offense slogged along, producing just two field goals as it trailed 7-6. Another loss appeared to be looming. But then, Hawkeye running back Akrum Wadley struck for a 54-yard touchdown run with 5:28 left. After a two-point conversion, Iowa led, 14-7. And the defense did the rest on a day when it limited the Golden Gophers to 269 yards.

"Sooner or later, they slip up and it will be a long one," Wadley said. "Either LeShun (Daniels) or me was going to hit it.

?It feels great in the locker room. We are definitely going to enjoy this one.?

Iowa should celebrate. The program was at a bit of a crossroads before the first leaf had fallen off a tree in Keokuk, Iowa. The Hawkeyes woke up in Dinkytown with a 3-2 record that included a cold-bucket-of-water-over-the-head home Homecoming loss to Northwestern the week before. Prior to that, alarm bells were sounded when the Hawkeyes fell in Kinnick Stadium to FCS North Dakota State. Yes, the Bison are the nation?s premier FCS program, but as the defending Big Ten West champ and consensus pick to repeat, Iowa probably shouldn?t have lost on its own turf. In between those losses was an uninspiring 14-7 victory at Rutgers.

How good was Iowa?

This is a program that has been built on the foundation of toughness up front. Good play on the offensive and defensive lines has been the hallmark of the Hawkeyes under Kirk Ferentz. But the 2016 Iowa squad wasn?t up to par in the trenches. The natives worried.

Who was this team?

And the lack of a good ground game put pressure on quarterback C.J. Beathard, who was fighting through the struggles up front to still hit 61 percent of his passes for 945 yards with nine touchdowns and two interceptions. He was off his game, too.

?Yeah, just you know it?s kind of like a throwback to last year if you will and ironically we did start the same two tackles against Minnesota a year ago, and that wasn?t necessarily what promoted it,? said Ferentz. ?Just thought maybe it would be a worth taking a shot at and see if Cole (Croston) looked more comfortable on the right side. Boone (Myers) slid out and did a good job and I want to give Ike (Boettger) a lot of credit for going to the guard position. I feel like he competed really well out there and then Sean (Walsh) and James (Daniel) did a good job, so this was tough and impressive, very athletic defense, and I thought the guys did a really good job.?

That helped smooth over the rough edges of Beathard?s game today, when he hit just 17-of-31 passes for 142 yards with two interceptions. Now, it?s on to Purdue next week, where Iowa has won three in a row.

"I would like to say we wanted it more," said Beathard, who helped the program match a school record with its eighth road win in succession. "We wanted it very bad."

And needed it very badly. Iowa?s win keeps it firmly in the chase for what looks like a wide-open Big Ten West, with Nebraska leading the way with a 5-0 mark (2-0 Big Ten). This still is a well-coached team. And it has a lot of pride and talent-in addition to a favorable schedule that has Big Ten West rivals Wisconsin and Nebraska coming to Iowa City, in addition to a visit from Michigan. The toughest road game: At Penn State. Bottom line: The Hawkeyes still may end up returning to Indianapolis for the Big Ten championship game.

?Minnesota has a tough team,? said Wadley. ?They?ve been winning. They have great defense. Coach is always talking about embracing close games, and we knew it was going to be a close game. It was about who was better today."

Iowa was the better team. And, it still may end up winning the West with this early October game serving as a turning point.