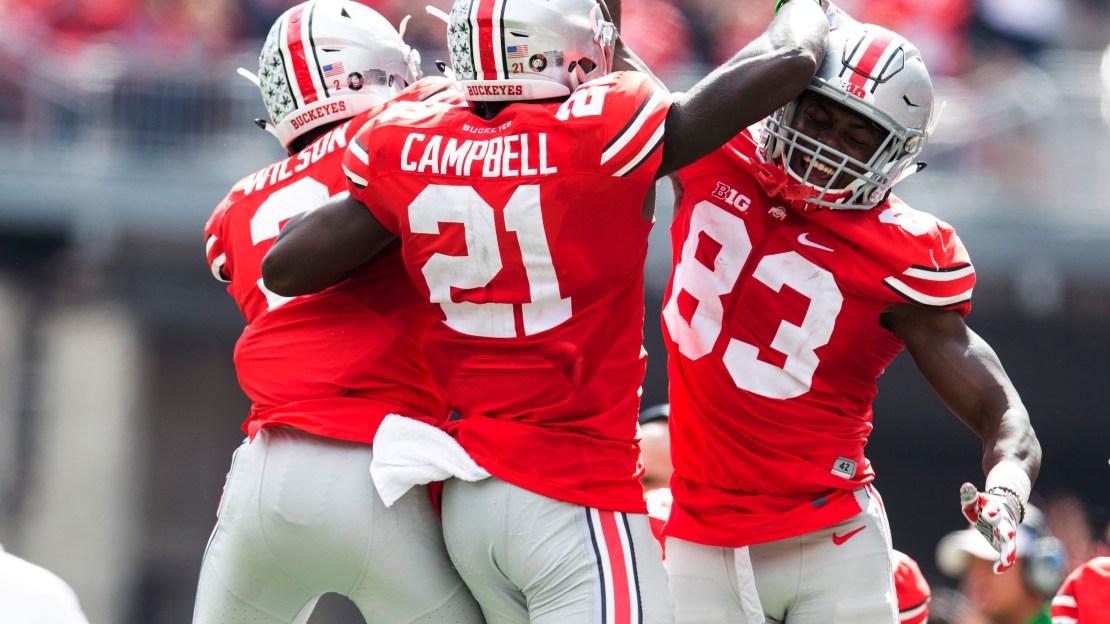 Five weeks down, and Maryland, No. 4 Michigan, No. 12 Nebraska and No. 2 Ohio State remain perfect.

Here is what I?m buying and selling post-Week 5.

Ohio State won't lose a game en route to the Big Ten East crown?
BUY. I don?t see Ohio State losing. The Buckeyes are rolling. In fact, this may be Urban Meyer?s best team since taking over in Columbus in 2012. And that?s saying a lot. Defense is this team?s calling card. The Buckeyes are No. 1 in the nation in scoring defense (9.3 ppg); No. 3 in total defense (237.8 ypg); No. 12 in rush defense (97.5 ypg); No. 6 in pass defense (140.3 ypg). Want more? Ohio State?s defense has allowed just two TDs and it has scored four. The secondary may not have a peer with players like Gareon Conley and Marshon Lattimore on the corners and Malik Hooker and Damon Webb at safety. No wonder OSU is winning games by an average of 47.7 points.

Iowa is still the team to beat in the West?
SELL. Yes, the Hawkeyes have a more favorable schedule than Wisconsin and Nebraska. But Iowa has issues. Among them, it can?t pass protect, penalties are abundant and the defense can?t stop the run. Plus, the offense has the usual issue of struggling to make explosive plays. The Hawkeyes already have two losses to the likes of FCS North Dakota State and Northwestern-both at Kinnick Stadium. This for a program that returned many of the same players from a team that enjoyed a 12-2 season of glory in 2015.

Michigan?s kicking woes could be its undoing?
BUY. The Wolverines are just 4-of-8 on field goals this year. Michigan missed three on Saturday. And it almost proved costly in a narrow 14-7 home win vs. Wisconsin. Kenny Allen missed two tries, from 31 and 43 yards. Walk-on Ryan Tice took a shot at it and missed a 40-yard attempt.

?We?ll have a little kicking competition this week, and it?ll be an opportunity for Ryan Tice,? Jim Harbaugh said afterwards. ?See if we can?t make them next time.?
There is so much to like about 5-0 Michigan. It would be a shame if kicking field goals ruined what could be a special season.

Indiana?s win over Michigan State was a watershed moment for the program?
BUY. This was significant. In fact, the Hoosiers? 24-21 overtime win vs. No. 17 Michigan State was the signature victory of the Kevin Wilson era, a breakthrough that IU had been working for since Wilson took over in 2011. Indiana ended a seven-game losing streak in the series, reclaimed the Old Brass Spittoon for the first time since 2006, beat a ranked team at home for the first time in a decade and earned its first overtime win since 2010. Wilson has come close in the past to beating a heavyweight, pushing schools like Michigan and Ohio State to the limit ? only to fall. But Indiana finished the job vs. a ranked team on Saturday. And, even more significant, the Hoosiers did it with defense, which no longer is a dirty word in Bloomington with the arrival of new coordinator Tom Allen and line coach Mark Hagen.

Michigan State should be worried?
SELL. The Spartans, riding a two-game skid for the first time since November 2012, need to fret. This team has issues on offense. MSU is No. 12 in the Big Ten in scoring (22.8 ypg). Running consistently is an issue, as the Spartans are No. 8 in the Big Ten in rushing (170.3 ypg). No workhorse running back has emerged. Turnovers also have been an issue, as Michigan State is No. 12 in turnover margin at minus-one. Want more? Tyler O?Connor has been inconsistent at quarterback. He has five picks; only two other Big Ten QBs have more. Too much pressure is being put on the Michigan State defense. The next three games are critical for MSU, as it plays at home vs. BYU and Northwestern before playing at Maryland in what is shaping up as an interesting game. MSU needs to win them all to stay in contention.

Tommy Armstrong is the Big Ten?s second best quarterback after Ohio State?s J.T. Barrett?
SELL. I think Penn State?s Trace McSorley is the second-best signal-caller in the Big Ten. The guy is an emerging star and was at his best on Saturday in rallying the Nittany Lions to an overtime home win vs. Minnesota. He hit 19-of-40 passes for 335 yards with a touchdown. He also ran eight times for a team-high 73 yards and a TD. The first-year starter is hitting 58.9 percent of his passes for 1,284 yards with six touchdowns and three picks. McSorley is perfect for this new Nittany Lion spread attack. And he gives PSU a shot to win each week.

Purdue won?t win another game?
BUY. I don?t see it happening. Do you? The Boilermakers? effort in a 50-7 loss at Maryland was abysmal. Purdue was obliterated by a Terrapin squad that is improving under rookie coach DJ Durkin but in no way should have won in such easy fashion. To wit: Maryland had 400 yards rushing; Purdue had 10. There is no other way to put it: The 2-2 Boilermakers were embarrassed like never before under Darrell Hazell. And that?s saying a lot for a coach who is 8-32 overall and 2-23 in the Big Ten. How will this team respond at Illinois this week? Fascinating.

Northwestern still has life?
BUY. The Wildcats? 38-31 victory at Iowa was a season-saver. NU?s campaign was threatening to go off the rails. Pat Fitzgerald?s crew opened 1-3 with losses at home to FCS Illinois State and Western Michigan. But Northwestern showed what it is made of with a big win vs. the Hawkeyes, NU?s first in Kinnick since 2009. The big key for the Wildcats: Running the ball. Justin Jackson ran 26 times for 171 yards and a TD. When he is excelling, Northwestern is winning. It?s no secret. Oh, and the NU defense showed how salty it can be with six sacks vs. Iowa. And LB Anthony Walker is starting to live up to his hype. The Wildcats will have a say in who wins the West. And, it still could be NU.

Illinois can build off loss vs. ranked Nebraska?
BUY. In the case of the Fighting Illini, moral victories DO count when you are rebuilding. This was a heck of an effort for Illinois, which led Nebraska in Lincoln as the fourth quarter began only to fall, 31-16, to the No. 15 Huskers. Illinois had some nice run-pass balance that kept it in the game. But more big plays are needed for this offense to excel. But, it may lack the talent to expect more. Still, Illini fans have to be encouraged with how well Illinois was prepared and how well it played. There may be a few more wins coming during this season of transition under Lovie Smith, who knows how to coach.