Jake Replogle Q&A: 'I knew this was where I wanted to play college football' 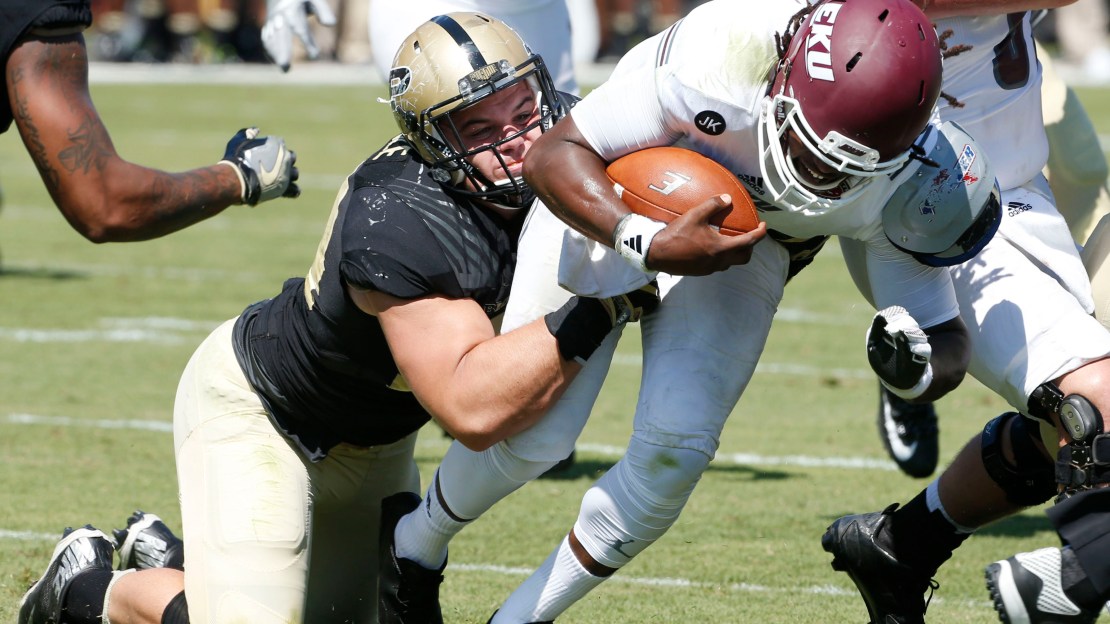 Consistency has been an issue for Purdue?s defense in recent years. But defensive tackle Jake Replogle has been a force during his entire tenure in West Lafayette, Indiana.

The 6-5, 289-pound senior not only is the best defender for Purdue, he?s one of the top tackles in the Big Ten-if not the nation. He?s enjoying a strong start in his final season as he looks to get the program to its first bowl since 2012. So far, so good, as the Boilermakers are off to a 2-1 start as they trek to Maryland to begin Big Ten play this Saturday.

Replogle has 18 tackles this season despite being a focal point by drawing double-teams, which have freed up teammates like end Evan Panfil, who is having a big season with 4.5 TFLs and two sacks. In 2015, the Centerville, Ohio, native finished with 60 tackles, a team-high 14.0 tackles for loss, a pair of sacks, two PBUs and a blocked field goal.

The fact Replogle matriculated to Purdue is unique, given that his three older brothers all played at Indiana. I caught up with Replogle as he prepped for the Big Ten opener as Purdue enters Big Ten play over .500 for the first time in the Darrell Hazell era.

Q: What problems does Maryland pose? The Terrapins are off to a 3-0 start.
A: They want to run the ball, which is something we saw from Nevada last week. And Maryland does it well. They have had a lot of success with it, so that has been a big emphasis for us this week. They have a lot of good backs who can make people miss. They have one coming back this week (Wes Brown, suspended the first three games), so we definitely have a challenge this week.

Q: What was the key to the defense playing so well last week?
A: People were getting off blocks and making plays. And, most importantly, people were doing their job. We didn?t play like we wanted to play a few weeks before vs. Cincinnati. We worked on some things in the bye week. Coach (defensive coordinator Ross) Els had the emphasis of getting off blocks and wrapping up. We have stressed all year doing our job. And it all came together last week. We made plays and were flying around.

Q: You have a new d-line coach in Randy Melvin. What has he meant to the unit?
A: He has been huge. He has brought a lot of discipline and expects a lot from us. He has taught us so much going back to the spring. He has taught us a bunch of stuff, things like how to prepare for a game, what to look for in offensive linemen, different cues, get-off keys. He does a good job preparing us and getting our minds right. I think that?s why our d-line has had some success.

Q: End Evan Panfil is having a nice year. Talk about your linemates.
A: Evan Panfil is my roommate and probably my best friend on the team. No surprise he?s having a big year. He is one of the hardest working guys I know. Always doing his job. Coach Melvin has been a big help to him, adding to his pass rush repertoire. (Tackle) Eddy Wilson is a young guy who played a little last year. He?s very athletic for a 300-pounder. He had a good game on Saturday. Gelen Robinson is a freak off the edge. He?s a shorter guy but real powerful. (End) Austin Larkin is a transfer who came in the spring and has done a good job. A lot of guys have been stepping up and making plays.

Q: How often are you being double-teamed this year?
A: I don?t know. I try not to track that. I just play one play at a time and take it from there.

Q: How did you end up at Purdue when three of your brothers played at IU?
A: I get that question a lot. I grew up going to IU games. When it came to my college decision, Purdue reached out to me and was my first offer. My dream was to play Big Ten football. One of my brothers came with me on my trip and I was surprised with how welcoming and comfortable I felt up here on my visit. We were impressed with the facilities and the people. I committed the next week. I knew this was where I wanted to play college football.

Q: Do any of your brothers wear Purdue apparel to support you?
A: One of my brothers is starting to wear some Purdue gear. But I?m having a hard time getting the other two to wear some Boilermaker stuff.