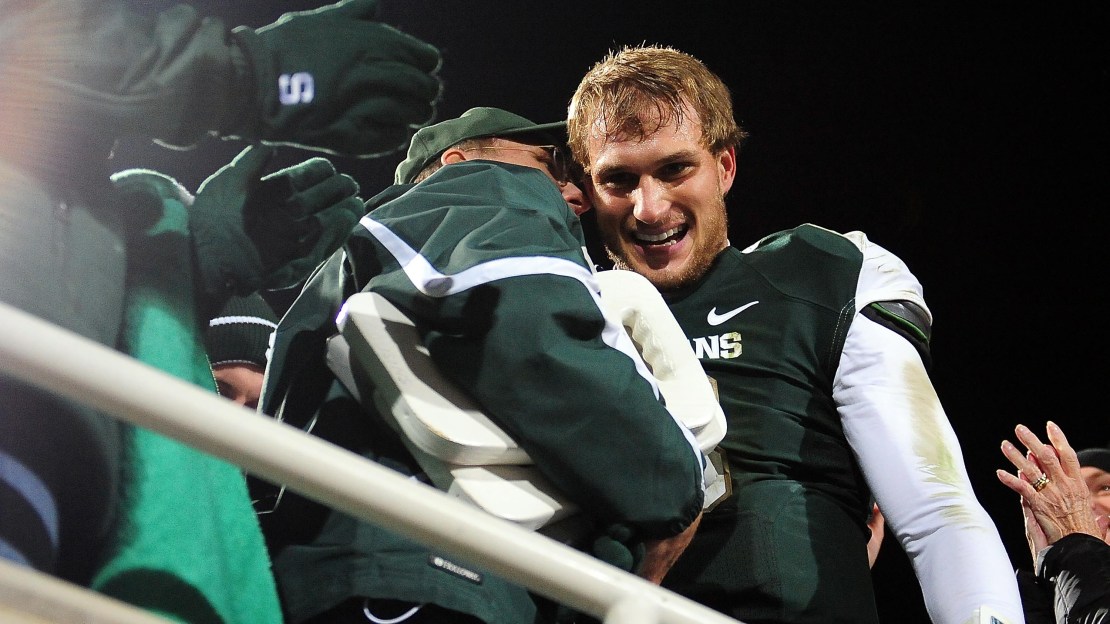 The Big Ten takes the lid off conference action, as the league is playing nine Big Ten games for the first time since 1984.

Four leagues games are on the docket as the race to the 2016 title begins. Indiana (Wake Forest), Minnesota (Colorado State) and Purdue (Nevada) play non-conference games, while Illinois, Maryland and Ohio State are idle.

Here is a look at the Best of Week 4.

Best game: Wisconsin at Michigan State. This is a boffo lid-lifter to Big Ten action, a matchup that we haven't seen since 2012. Both teams are rolling, as the Badgers are 3-0 with a win vs. LSU and the Spartans are 2-0 coming off a monster victory at Notre Dame. Each team has a first-year starting quarterback. Which one will make the most plays? These schools haven?t met since 2012, as Michigan State has won three of the last four. The Badgers? lone win in that span came in the 2011 Big Ten title game. Earlier in that 2011 season, the teams met in East Lansing with the Spartans winning 37-31 on a game-ending Hail Mary from Kirk Cousins to Keith Nichol.

Player on the spot: Wisconsin QB. Will it be Alex Hornibrook or Bart Houston? The Badger staff pulled Houston and inserted the redshirt freshman Hornibrook in the third quarter last week vs. Georgia State. And, the young lefty looked good in hitting 8-of-12 passes for 122 yards with a touchdown and pick in leading UW to a 23-17 win. Hornibrook led the Badgers to scores on three drives in the second half and is a more accurate passer than Houston with a nice upside. But how will he handle a hostile environment in Spartan Stadium facing a vicious Michigan State defense if he starts? Houston is a senior who beat LSU to open the season.

Best matchup: Penn State wide receivers vs. Michigan secondary. The Nittany Lions are led by Chris Godwin, who has a Big Ten-high 18 receptions. DaeSean Hamilton has 12 grabs. Mike Gesicki is a top tight end. Will this be the week Wolverine All-American corner Jourdan Lewis plays for the first time after dealing with injury? Michigan also has the likes of Jeremy Clark and Channing Stribling at corner along with safeties Dymonte Thomas and Delano Hill.

Best QB matchup: Penn State?s Trace McSorley vs. Michigan?s Wilton Speight. Each is in his first season as a starter; and each is excelling. McSorley is adept at running the new Nittany Lions? spread attack, completing 64.4 percent of his passes for a league-high 828 yard with four TDs and two picks. Speight is hitting 63.8 percent of his passes for 686 yards with eight TDs and just one interception.

Best coaching matchup: Nebraska?s Mike Riley vs. Northwestern?s Pat Fitzgerald. Riley is coming off a tough debut in Lincoln that was notable for many difficult losses, but the Huskers have some mojo with a 3-0 start that includes a big win vs. Oregon last week. Riley is a seasoned coach who has led teams in the Pac-12, CFL and NFL. Fitzgerald is an all-time great as a player and a coach in Evanston. He is Mr. Northwestern-and the Big Ten?s second-longest tenured coach. But the start to 2016 has been tough, as NU opened with home losses to Western Michigan and FCS Illinois State before finally winning last week vs. Duke.

Best coordinator matchup: Penn State OC Joe Moorhead vs. Michigan DC Don Brown. Penn State is averaging 35.3 points in the former Fordham coach's new spread attack. The Wolverines are yielding 15 points per game in its first season under ?Dr. Blitz.?Brown is sure to come after PSU signal-caller Trace McSorley with some interesting schemes.

Best chance for an upset: Rutgers vs. Iowa. The Hawkeyes can?t feel sorry for themselves coming off the tough home loss to FCS North Dakota State. This is a battle-tested Scarlet Knight squad that has fought back from 14-0 and 21-0 deficits the last two weeks to win. RU knows Iowa will try to run the ball. Can the Scarlet Knights stop it? Their run defense is No. 13 in the Big Ten.