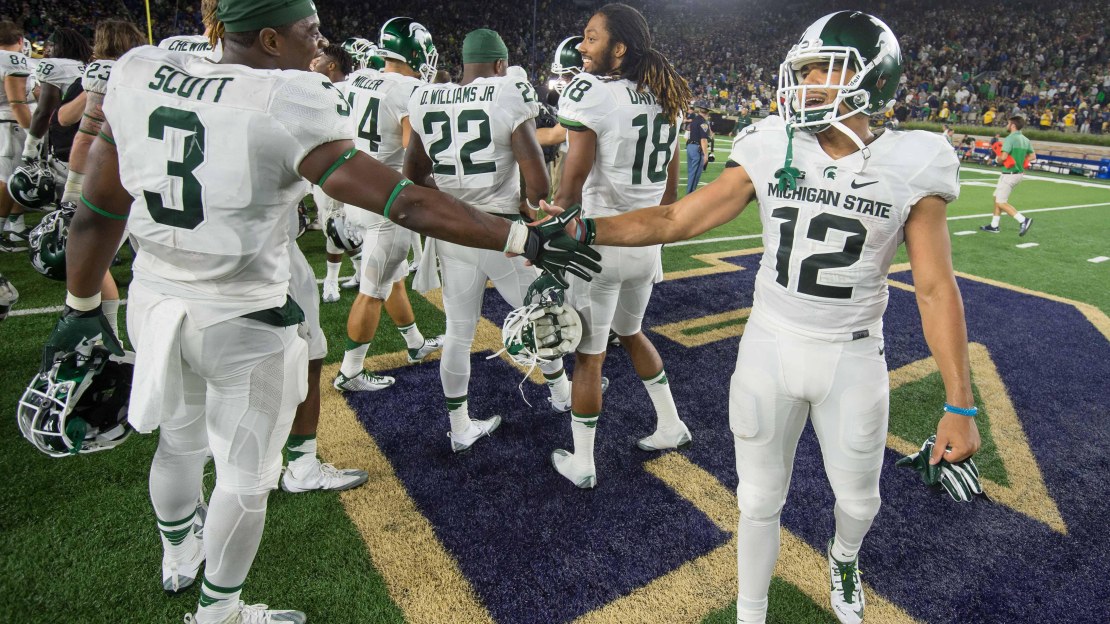 With Iowa suffering a stupefying defeat and big wins by Michigan State and Nebraska, my latest Big Ten Power Rankings, presented by ArcelorMittal, has a new look.

But there's nothing new about the top spot, where Ohio State showed why it's king of the Big Ten … if not the country.

1. Ohio State (3-0). The Buckeyes enjoyed a ?coming of age? win at Oklahoma. How good is this team? The answer: Scary good.
Last week: 1
Up next: Idle

2. Michigan State (2-0). The Spartans looked dominating at Notre Dame before letting the Irish back in the game. No doubt, MSU answered any questions pundits had.
Last week: 5
Up next: vs. Wisconsin

3. Michigan (3-0). The Wolverines enter Big Ten play perfect and on a roll. It was good to see Michigan have to fight back from some adversity this week. But how good is this team?
Last week: 3
Up next: vs. Penn State

4. Nebraska (3-0). The Cornhuskers are coming off what could be a season-defining win vs. Oregon. Is this the team to beat in the West? Can Nebraska sustain the mojo?
Last week: 7
Up next: at Northwestern

5. Wisconsin (3-0). Yes, the Badgers won ugly. But they are 3-0. And it looks like they may have a new QB in Alex Hornibrook. Now comes a brutal five-game stretch to open Big Ten play. Good luck, Bucky.
Last week: 4
Up next: at Michigan State

6. Iowa (2-1). The Hawkeyes must regroup after suffering a tough loss to five-time defending FCS champ North Dakota State. This could be a defeat that focuses the team-at least that?s the hope.
Last week: 2
Up next: at Rutgers

7. Minnesota (2-0). The Golden Gophers were off on Saturday, but don?t discount Minnesota in a West Division race that could be wide open after Iowa?s loss.
Last week: 6
Up next: vs. Colorado State

8. Penn State (2-1). The Nittany Lions got a much-needed win vs. Temple. Now comes a trip to Michigan. James Franklin is still looking for a signature win. Is this it?
Last week: 8
Up next: at Michigan

11. Rutgers (2-1). The Scarlet Knights had to battle back from an early double-digit deficit for a second week in a row. Why does RU make it so difficult?
Last week: 11
Up next: vs. Iowa

13. Illinois (1-2). That?s two losses in a row by a combined 49 points for the Fighting Illini, who have a lot of work to do under first-year coach Lovie Smith.
Last week: 12
Up next: Idle

14. Purdue (1-1). The Boilermakers were off, looking to rebound from a home loss to Cincinnati. A visit from Nevada looms. Purdue MUST win.
Last week: 13
Up next: vs. Nevada