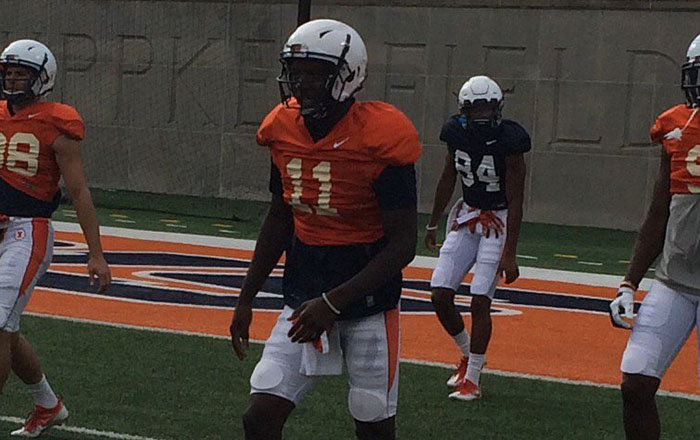 Illinois (1-0) faces North Carolina (0-1) at 7:30 p.m. ET on BTN/BTN2Go. It's a big game for Illinois an a rare one for North Carolina, who are just one of six teams in the last 15 years to have two non-conference games against power conference opponents in its first two games away from home.

Let's look at five facts for this game.

1. This is the fourth meeting between these schools. The Tar Heels won the previous three meetings, most recently defeating the Illini 48-14 last season. None of the three meetings have been close as the Tar Heels have won each game by at least 20 points. The Fighting Illini is just 3-5 against the ACC but this will be their first home game against an ACC foe since the 1971 game against North Carolina. Their last win against an ACC team came in the 1999 Micron PC Bowl against Virginia. Illinois has won 23 of its last 25 non-conference home games, only losing against Fresno State in 2009 and Louisiana Tech in 2012. They are trying to start 2-0 for the fourth straight season, something that hasn?t happened since a 5-season stretch from 1926-30.

3. The Lovie Smith era started off on a good note as the Illini won 52-3 against Murray State last week. They won their season-opener against Kent State last season by the exact same 52-3 score. This is the first time that Illinois has scored 50+ points in back-to-back season openers. Illini fans certainly took notice. 48,644 fans came to see the debut, which was the highest attendance for a non-conference home game since 2011 against Arizona State (50,669). It?s possible that the Illini could pass that mark this Saturday for a primetime game against a team that finished in the Top 15 nationally last season.

4. The Illinois offense was explosive against the Racers. Wes Lunt?s 68-yard TD pass to Malik Turner was the longest play of Lunt and Turner?s respective careers and Kendrick Foster?s 29.5 yards per carry was an Illinois record. He had two 56-yard touchdown runs. Of their five scoring drives in the first half, only one  was longer than two minutes and only one was longer than four plays. Lunt has continued to play at a high level in regular season non-conference play in his career. Lunt is 9-3 in 12 starts with 24 passing TD to just eight interceptions. Lunt needs 250 passing yards to become the tenth player in school history to throw for 5,000 yards.

5. If Illinois can run the ball well, they could have a good chance to win the game. North Carolina?s run defense was really bad last season and it picked up where it left off against Georgia. The Tar Heels ranked 121st in rushing defense last season, allowing more than 247 yards per game on the ground. They allowed 289 rushing yards last week against the Bulldogs with Nick Chubb running for 222 yards and 2 touchdowns. In their last four games, they?ve allowed 1,561 rushing yards and 15 touchdowns. Only five FBS teams have been worse against the run since the start of last season.