Once again, it's time for Michigan State football to earn respect 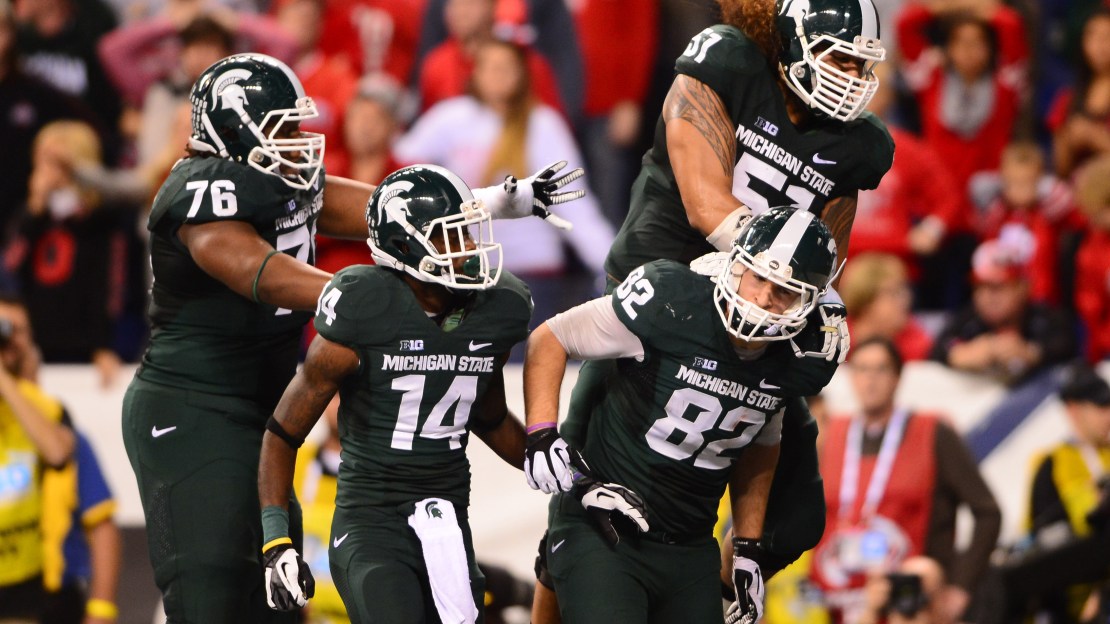 If you bought a preseason college football magazine at your local Kroger or Jewel this summer, you noticed it.

Flip to the Big Ten section and you?ll see it there in black and white: Ohio State picked to win the Big Ten East ? and the Big Ten. That could be seen as a lack of respect for Michigan State, the Big Ten's defending champ.

?We like it, it?s fine. I don?t mind,? tight end Josiah Price said this summer at media days in Chicago. ?Talk about Ohio State all you want, talk about Michigan all you want. We?re going to come play and we?re going to play our game, and results will speak for themselves this fall.?

This will be Mark Dantonio?s 10th season in East Lansing, Michigan. He has flipped the script on a Michigan State program that for years had lacked consistency. But since 2010, Dantonio has forged a 65-14 overall record and 39-9 in the Big Ten with three conference championships. If a coach at a school like, say, Florida, Alabama, USC or Ohio State had that resume, he?d be dipped in bronze and parkd out front for all the world to see.

What is scaring off America from embracing Michigan State this fall? Yes, there are some big personnel holes. All-time great quarterback Connor Cook is gone. Big Ten receiver of the year Aaron Burbridge has departed. All-league defensive end Shilique Calhoun has left the building. And on it goes.

?It is tough to replace guys, but the thing with our coaches is they?re bringing in guys that can do that,? MSU linebacker Riley Bullough said. ?We have all the confidence in the world in our guys, especially at the quarterback position. We feel like we have three guys that can start there and do a great job. So none of us are worried about that, we have all the confidence in the world. And we?re really just excited to go out and show the world what we can do.?

There still is plenty of talent on hand, led by perhaps the top defensive tackle in America in Malik McDowell. And, most importantly, Dantonio and his stable staff remain firmly entrenched in East Lansing.

?This is a good program,? said MSU wideout R.J. Shelton. ?We take a lot of pride in how we do things around here.?

And it all circles back to Dantonio, one of the best coaches in America. Still, unbelievably, he had his name misspelled by Sports Illustrated last year-on the cover no less. It read ?Mike? Dantonio.

The Wall Street Journal even got in on the misspelling, calling Mark Dantonio ?Mark D?Antonio.? You can?t make this stuff up, people. So, you can see why MSU may have developed a rather large chip on its shoulder in recent years. Consider it fuel for a coach and program that epitomize blue collar.

?We believe in hard work here,? says Dantonio, who team will benefit from playing Michigan and Ohio State at home this season. ?We're going to work extremely hard. We're playing with great effort and understanding what we're doing and having knowledge about what we do, and that's brought us positives. There are still some negatives out there. There's going to be negatives around every program that's out there.?

Still, for Dantonio and Michigan State, the benefit of the doubt remains elusive as they begin defense of their title tonight at home vs. FCS Furman. I am vexed. What Dantonio and Co., already have done should be enough for pundits. Just rubberstamp this program and move on. It?s good. No, it?s great. And, it deserves better than a third place predicted finish in its own division. Check out these credentials.

If the Spartans end up on top of the Big Ten again this season and then reach the playoffs, will that be enough for any doubters? Perhaps it will take winning the national championship – or at least playing for it – to erase any remaining skeptics. For now, count on Michigan State being fueled by being overlooked and underrated.

There is no more powerful motivator in sports-or life, for that matter.

?At this point, I just feel like it?s part of our identity. I feel like every year there?s people doubting us,? Bullough said. ?But I guess we like it because we seem to play pretty well. And that?s just what we plan on doing again this year.?