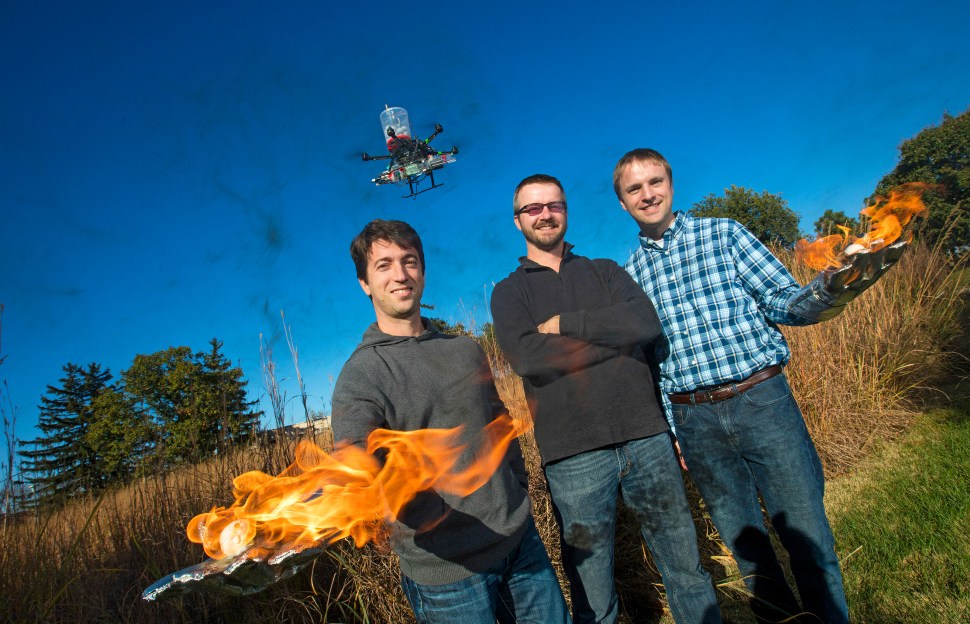 Great news! A group of professors at the University of Nebraska has successfully tested a small drone that rains fire from the sky.

As dystopian as that sounds, the group intends to use its powers for good, not evil. In the world of controlled burns that prevent the spread of spontaneous wildfires and reduce invasive plant species, their work could revitalize parts of the Great Plains and save the lives of firefighters – all thanks to a cross-discipline project that includes experts on mechanical engineering and ecology.

BTN LiveBIG talked with two of the four men involved in the project: Dirac Twidwell (center in the above photo) of the Twidwell Research Team in the Department of Agronomy & Horticulture at the University of Nebraska-Lincoln and Carrick Detweiler (at right, above) of the Nebraska Intelligent MoBile Unmanned Systems (NIMBUS) Lab about why fire is needed to prevent invasive trees from destroying grasslands, why drones are safer than other methods and if this work is the next great advancement in firefighting.

BTN LiveBIG: Drones capable of starting fires sounds kinda scary. How do you explain the upside to people?

Carrick Detweiler: The main benefit is we?re removing people from the interior of these fires. Right now, the state of the art is you put a person walking through the middle of a field where the fire is burning all around them and they?re either walking or on an ATV or a small truck driving through and doing these interior ignitions. A number of people have been injured or died doing this in the past five or ten years because this is an inherently dangerous task. By using a UAV [unmanned aerial vehicle], we can remove the person from the interior of the fire and put them on the exterior.

Ultimately small to large drones will replace a lot of the aerial ignition that?s currently done by manned helicopters and planes.

Dirac Twidwell: If we?re talking about beef production in many areas of the Plains, preventing woody plants from removing [livestock?s] forage base will make people more money. It?s one of the most profitable techniques they can use. We have the most fire-sensitive plant that?s removing profitability from those lands.

BTN LiveBIG: Unless you have a garden with weeds, most people think plants and trees growing anywhere is a good thing. But you?re saying that?s not the case.

Twidwell: Eastern red cedar is probably the most planted tree in the Great Plains. We?re seeing the slow change from grasslands to this juniper forest as a result of thinking we can plant something like that and it won?t spread.

How the drone works

BTN LiveBIG: Tell me about the chemicals inside the ping-pong balls that start the fires.

Detweiler: We?re using a commercial, off-the-shelf, ping-pong sized-ball used in aerial ignitions from full-sized helicopters. It doesn?t ignite until a minute after it?s injected. It?s on the ground a little while before the ignition really starts. [The balls are] not going to ignite unless you put this particular chemical mixture in them.

The other thing we?ve done in the NIMBUS lab is the tight integration with the UAV or the drone. How do you actually make the UAV fly to the right locations? How do you ensure you?ll only drop one of these balls when you?re actually at the location you want to be?

BTN LiveBIG: What did you learn from your field trials?

Detweiler: It turns out for most of these landscapes, as long as you get within ten feet, you?re fine. Or even larger errors. As long as you?re in the ballpark, that?s good enough.

BTN LiveBIG: The average person hearing that would think you need to be very precise if you?re setting fire to the Great Plains.

Detweiler: It?s a question of scale. If you?re off by ten feet or even 100 feet over a quarter-mile, that?s not much of a problem. But when we do care about it is when you?re in fire conditions, that?s where the precision does matter.

BTN LiveBIG: How many of those ping pong balls do you need to ignite, say, an acre?

Detweiler: Probably you?re talking about a dozen or so balls to be effective.

BTN LiveBIG: How else could this technology be applied?

Detweiler: One of the other projects is aerial water sampling. We?ve designed and developed the software and hardware to have a UAV go out and collect water samples by flying really close to the water. A lot of similar technology comes into play?in terms of how do you fly safely and reliably, especially when you?re close to the environment or in hazardous areas.

BTN LiveBIG: What?s next in this research?

Twidwell: We?ve been getting requests from areas like the Badlands National Park where they?ve got these mesas where they have to have people climb up to light off the tops in order to conserve the vegetation that?s there. That would be much easier to do with aerial ignitions with UAVs. That?s ultimately the end goal: providing another tool in the toolbox for people dealing with fire management challenges.

Detweiler: If every firefighter, in addition to the shovel they carry, carries a small drone that could help them scout and also do back burns to increase their safety that will really change the way we both manage lands but also fight wildfires.