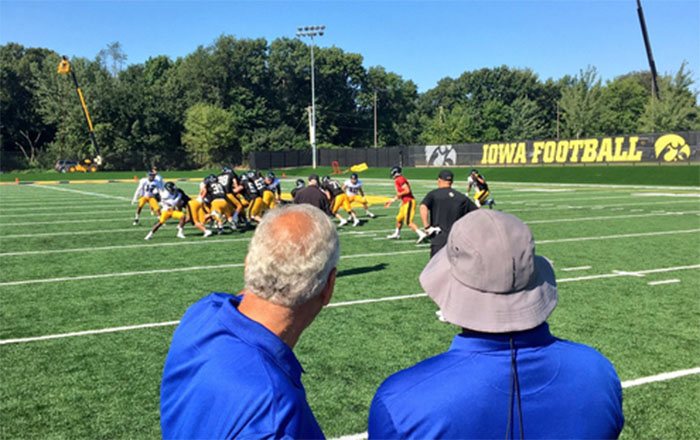 The countdown to kickoff has begun.

We are one day away from the start of the 2016 Big Ten football season.

Until then, here are 14 bold predictions to prime the pump for the 2016 season.

Illinois: The Illini will miss a bowl, but they will win one game they aren?t supposed to, beat the teams they are supposed to beat and be competitive in losses. And the expression on Lovie Smith?s face never will change.

Indiana: The defense will go from bad to solid as the Hoosiers push to back-to-back bowls for the first time since 1990-91. Kevin Wilson will talk even faster, and become a man in demand.

Iowa: The Hawkeyes have a better team than last season?s 12-2 Rose Bowl squad-but the record may not reflect it. Kirk Ferentz won?t Tweet about it. But you can.

Maryland: The Terps will be an exciting team to watch with a go-go offense that will leave foes breathless and allow them to pull an upset ? or two. This is gonna be fun!

Michigan: Jim Harbaugh?s second team will start 7-0. But road games at Iowa, Michigan State and Ohio State will be the undoing of the Wolverines. You know what that will mean next offseason ? more satellite camps.

Michigan State: Fifth-year senior Tyler O?Connor will play as well as Connor Cook, showing aplomb in his only season as the starter. But it won?t be good enough to win the East again. Sit back and watch the chip on Mark Dantonio?s shoulder get bigger.

Minnesota: The Gophers finally will find offensive balance and make a run at the West Division championship-but come up short. Still, a bowl in Florida looms. That should impress Tracy Claey?s new boss.

Ohio State: RB Mike Weber will emerge as a worthy heir to Ezekiel Elliott as the Buckeyes reclaim their Big Ten East throne for a hungry Ohio State team motivated to win back its throne. The lesson: Never forget who is king.

Nebraska: Like offense? You?ll love Mike Riley?s second Cornhusker club, as Tommy Armstrong finally puts it all together during a banner senior season. Good thing, because NU may have to outscore teams to win.

Northwestern: This is the most-talented NU team ? ever. And the Wildcats again will win a bunch of close games, but a continued lack of pop on offense will keep NU from the elusive summit. But, hey, this is still ?Chicago?s Big Ten team.?

Penn State: The Nittany Lions will have one of the most exciting and productive offenses in the Big Ten, but they?ll lose some high-scoring games to keep them from competing in the East. How many wins will that translate to? I have no earthy idea. But I guarantee James Franklin will be clapping his hands and pumping his fists.

Purdue: David Blough will become the first QB to start an entire season under Darrell Hazell-but the postseason will remain an elusive quest because of spotty line play. Bottom line: This will be Hazell?s best season yet in West Lafayette. But what will that mean?

Rutgers: The Scarlet Knights will be one of the most improved teams in the Big Ten. In fact, RU may even reach a bowl and finish fifth in the East. I like where this is going.

Wisconsin: The Badgers will negotiate a brutal schedule because of a vintage offense-punch in the nose, punch in the nose, play-action pass–and stout defense. Sound familiar? Sure it does! Watch Barry Alvarez fold his arms and smile in the press box.