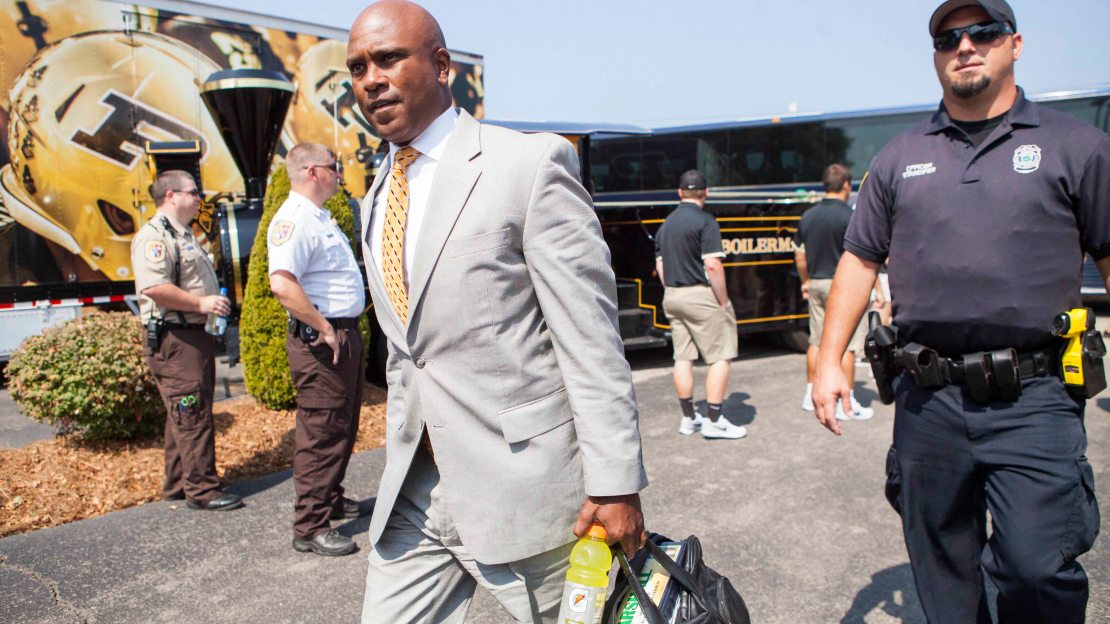 Two days away from kickoff, I'm sorting through my mail bag on a hot August afternoon, answering your questions and wishing the season would get here quicker. Let's go!

Purdue needs to win. It's a shame to see small crowds in Ross-Ade Stadium. Darrell Hazell is a man of character, and I hope he can succeed. Only time will tell. – Jerry Smith

This obviously is a big season for Darrell Hazell, who is in his fourth year at Purdue's red-brick campus. He needs to show some progress after going 6-30 his first three seasons. Adding to the scrutiny is the presence of new athletic director Mike Bobinski. Is there reason for hope this fall in West Lafayette? Sure. I like the changes Hazell made to his staff, promoting tight ends coach Terry Malone to offensive coordinator and hiring defensive coordinator Ross Ells. I like Malone, who was on Lloyd Carr's Michigan staff. Malone has simplified the offense-and that will help. The defense? More issues there. Still, this is the most experienced roster in the Big Ten-which provides more reason for optimism.

Minnesota fans are pretty excited about this upcoming season! The talent level and depth is better! Why weren't the Gophers picked by anyone to win the West Division of the Big Ten? – Randy J. Olson

I like Minnesota a lot. In fact, it wouldn't be a shock to see the Golden Gophers reach the Big Ten title game. The schedule is the most forgiving in the Big Ten. All three non-conference games are at home-and winnable-Oregon State, Indiana State, Colorado State. And the cross-division games are at Penn State; at Maryland; Rutgers. The season could come down to the final three games: at Nebraska, Northwestern, at Wisconsin. Minnesota is officially my "sleeper."

Is Curtis Samuel of Ohio State the next great one? – Anthony

He could be primed for a big season. He has flashed potential for several years. But the junior needs to take a big step in his production for a Buckeye attack that needs playmakers with the likes of wideouts Michael Thomas, Jalin Marshall and Braxton Miller gone. Samuel needs to be given the ball in space via pass and hand-offs so he can use his ample athletic skills.

Why is it difficult for the Badgers to recruit great QBs? You would think quarterbacks would want to play with running game and o-line Wisconsin offers. – Rocky Isaac

That is a good question. The Badger haven't lured mega recruits at QB over the years. But it really hasn't mattered. Wisconsin always seems to find and develop signal-callers who are more than adequate, including the likes of Scott Tolzien, Brooks Bollinger, John Stocco, Jim Sorgi, Darrell Bevell and Mike Samuel, among others. And landing N.C. State transfer Russell Wilson for the 2011 season was like hitting the lottery. Long story short, don't fret over the lack of four- and five-star recruits at the QB spot for the Badgers. But I will say this: I think Paul Chryst will land some big-timers, as he has a great rep as an offensive mind and has an NFL pedigree.

Lunt didn't look terrific the day we were at practice. He is adjusting to the new scheme of OC Garrick McGee. Still, I like Lunt's skill set. He's a big guy (6-5). What has hurt his development has been the consistent turnover in coaches. Lunt is on his third head coach at Illinois, and the offenses keep changing. That won't help any QB develop.

What do you think of the Iowa running game? – Mike Murphy

I love it. Of course, it all begins up front with another strong line. James Daniels looks like a star at center. And left tackle Cole Croston is a good one, along with right guard Sean Welsh. They block for a nice collection of backs led by LeShun Daniels and Akrum Wadley. This again will be one of the most punishing rushing attacks in the Big Ten. And that will make QB C.J. Beathard that much more effective.