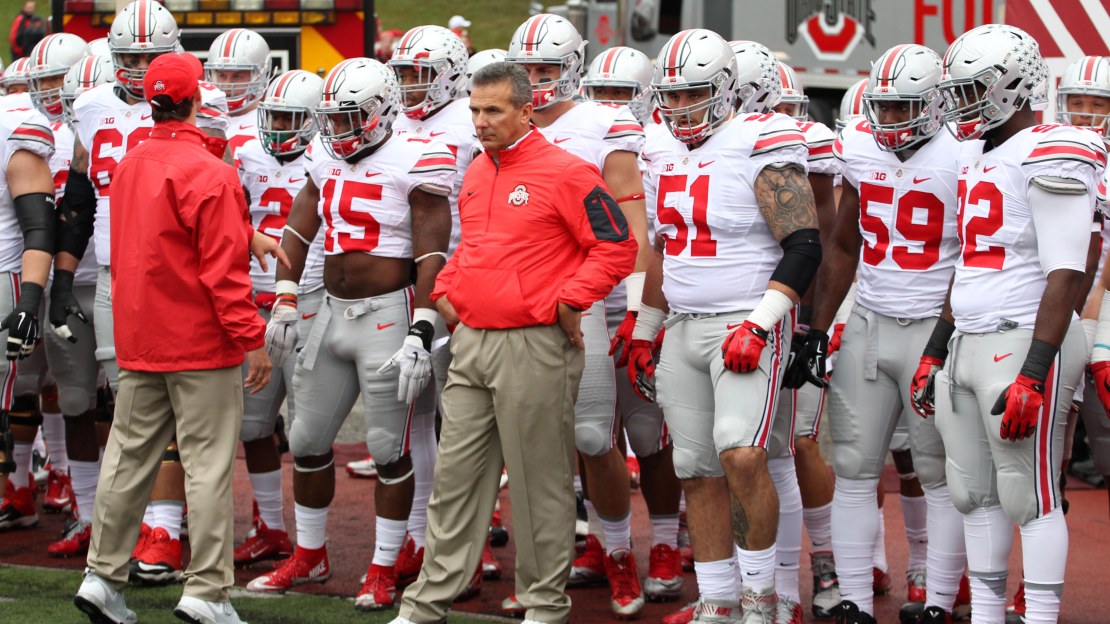 The BTN tour bus has been put in park. It's time for some football! I have had a few days to absorb and contemplate what I have seen and here is my inaugural Big Ten Football Power Poll, presented by ArcelorMittal.

Speaking of the summer football tour, it's not too late to go back and catch up on our 14-campus trip and all of the coverage. We started at Indiana, ended in Purdue, and BTN produced a whole bunch of video right here.

With that said, here is a look at

1. Ohio State. Yes, lots of key personnel has to be replaced-including 12 NFL picks. But, come on – it?s Ohio State. Just shake a Buckeye tree and watch a dozen or so five-star recruits fall to the ground.

3. Michigan State. Are we underrating the Spartans? After all, Michigan State is the defending Big Ten champ. And the Spartans have won double-digit games five of the last six years. If Michigan was coming off such a roll, Hollywood would be making a movie about it. Moral of the story: MSU just may defend its crown.

4. Michigan. The hype machine has become a runaway train. Credit Jim Harbaugh. No doubt, the roster is starting to swell with talent. And this is a well-coached squad. But let?s pump the brakes, OK? The Wolverines aren?t ready for the Big Ten penthouse ? yet. The offense has something to prove. And that Big Ten schedule? It?s a doozy.

5. Minnesota. If you wanna be Mr. Trendy and create headlines for yourself, pick the Golden Gophers to win the West. Hey, it may happen. The schedule is kind. And this is a smart staff that maximizes its roster as well as any Big Ten program. But is this really a championship-caliber offense?

6. Nebraska. The honeymoon is officially over for Mike Riley. Man, that was short. But, that?s OK. Because this edition of the Cornhuskers will better-but it?s not ready to end a conference championship drought that stretches to 1999. A commitment to the run is a good start to improvement. But will the d-line develop?

7. Northwestern. OK, I?ll just go ahead and type it: This is the most talented Wildcats team ever. Speed and athletic ability abound on defense. The o-line is solid and Justin Jackson is a primo back. The key to big-time success: The development of QB Clayton Thorson and the wideouts.

8. Wisconsin. A monster schedule casts a pall over the season. Can the Badgers navigate all of the land mines? Perhaps, as long as new QB Bart Houston can makes defenses pay if they commit to stopping the Wisconsin rushing attack.

9. Penn State. This is a ?pivotal? year. Hey, that was James Franklin?s word, not mine. But, I agree. The roster is back to 85 scholarship players. And there is no shortage of skill talent for a staff that has new coordinators. But the Nittany Lions still have a lot to prove in the trenches, especially on the offensive side. Long story short: PSU still may be a year away.

10. Rutgers. Chris Ash is a smart coach who is laying a good foundation. I am impressed with how the Scarlet Knights look up front on both sides of the ball-especially on defense. Will the Ohio State-style spread offense work? Stay tuned.

11. Indiana. The Hoosiers have some momentum. Can they build on it? Love the offensive line ? love the wideouts ? love the running backs ? love the linebackers. But will the d-line and secondary develop? And will the quarterback play drop off without Nate Sudfeld?

12. Illinois. The arrival of Lovie Smith has injected a much-needed dose of hope. Now, how soon will the Fighting Illini reap some benefits from Smith?s acumen? Making a bowl is a long shot in 2016 if Illinois can?t run better or get an edge on defense. Be patient, Illini Nation. Your time will come.

13. Maryland. The future is bright with D.J. Durkin at the controls, as recruiting is going well. Durkin will run a quick-paced, exciting offense. And the defense will set an aggressive tone. But talent and depth are worries. This may take a few seasons.

14. Purdue. Credit Darrell Hazell for not standing pat after three dreary seasons, as he overhauled his staff in the offseason highlighted by two new coordinators. Will the changes matter? Perhaps. But schemes won?t matter unless the Boilermakers play better up front on both sides of the ball.