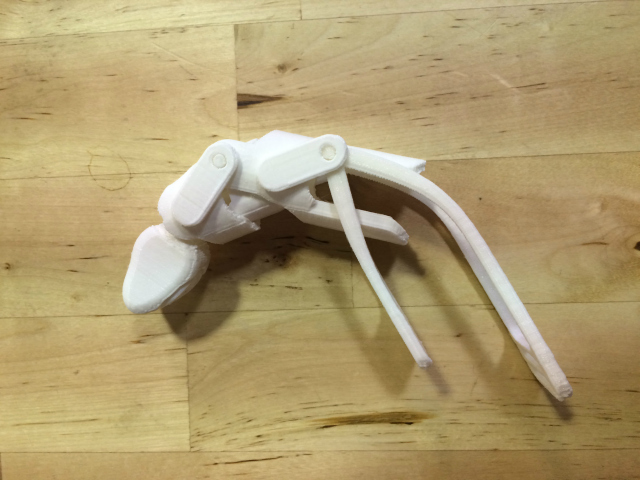 As one of the country?s leading-edge 3D printing labs, the University of Maryland?s MakerBot Innovation Center gets a lot of unique requests from throughout the school and the community. They?ve printed out everything from mechanical models and bracket fixtures to Mother?s Day presents and fingers.

That?s what Maryland business owner Brian Jordan wanted when he contacted the office a few months ago. An engineer by trade, Jordan lost parts of his thumb and index finger in a saw accident in his garage about three years ago. The owner of Jordan Research & Development, he also started a non-profit company called Robiotech Corp. to develop prosthetic digits for the nearly 400,000 people missing fingers or toes.

?There are only about two companies that build prosthetic fingers,? Jordan says. ?You would think there would be a lot more, but there really aren?t many options. It?s not like legs and arms.?

This realization led him to build a prototype to augment his own hand. It also led him to the MakerBot Center and began a collaboration that has been described by lab manager Tony Ingelido as a perfect fit.

?Brian is not a doctor, not a surgeon, not a medical device guru by any stretch of the imagination,? says Ingelido. ?He?s someone who had a problem and he developed something that worked very well for him and was very effective. In that way, he was a perfect fit for us. What was taking him a very long time to do over the course of six months, we had repeated and sent back to him in two weeks.?

Indeed, Jordan says the production process has become incredibly streamlined ever since he started working with the Maryland center, which consists of a number of labs with about 30 to 35 student and graduate technicians.

?It?s been fantastic, absolutely fantastic working with them,? Jordan says, ?They totally got it right away. I told them what we wanted to do, they said, ?We got it.? A day later, they had something for me.?

Jordan now hopes to have a fully functional prototype ready for testing by the end of the year. After that, he plans to register it with the Food and Drug Administration. The FDA doesn?t need to approve it, but a registration is needed in order to get it covered for many insurance claims.

He says the advantage of running it through a non-profit company is the ability to get prosthetics to people who otherwise couldn?t afford them. ?There?s a group of people that would benefit from this, we want to get it to them for free.?

For Ingelido and the lab, it?s all in a day?s work. In just three short years, the labs have done an estimated 15,000 print jobs, using 750,000 kg of filament over more than 100,000 print hours. That includes some biomedical projects, but none quite on Jordan?s level.

?After working on a lot of biomedical device projects, I much preferred customers who come at it from that direction,? he says. ?The medical professionals just don?t have the personal everyday experience to look at [projects like these] in the right manner. It really takes someone with the disability to [understand] the technical skills [needed] to get the job done.?

With the addition of a new biomedical engineering building on campus, Ingelido expects to work on getting more similar projects in the future. He relishes the challenges that are presented to the lab on a daily basis.

?One of the nice things is that nobody here is a professional developer,? Ingelido says. ?Everyone is under 25. They all do a great job, they have a lot of experience from where they?re at in their career. You get that kind of fresh insight. That kind of new ideas and creative zest in the products. Our intention is to help out as many people, so [we?ll do] whatever we can do to get that done.?