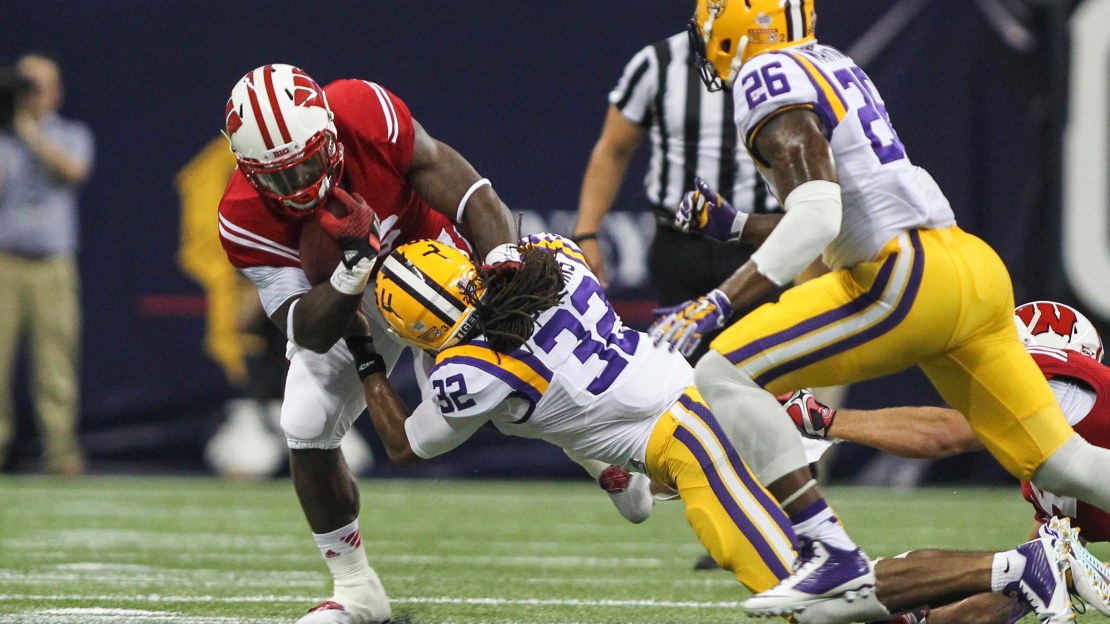 Welcome to 2016! And the Big Ten kicks off in style, as all 14 teams are in action over a three-day period.

But there is one marquee clash, as LSU plays Wisconsin in iconic Lambeau Field in Green Bay, Wisconsin. Aside from that, there are no big-time matchups. In fact, four teams are playing FCS schools, with Furman at Michigan State; Murray State at Illinois; Howard at Maryland; Eastern Kentucky at Purdue.

The MAC also is a featured foe, with Kent State playing at Penn State, Miami (Ohio) at Iowa and Western Michigan at Northwestern.

Two Big Ten squads open on the road, with Indiana at Florida International and Rutgers at Washington. RU never has played Washington.

Minnesota opens at home vs. Oregon State and former Wisconsin coach Gary Andersen on Thursday, Sept. 1, the same day Indiana plays on what is the first day of action involving Big Ten teams. Minnesota is 2-1 all-time vs. the Beavers, last playing in 1981. All three games have been in Minneapolis. IU and FIU played last year with Indiana taking a 36-22 decision in Bloomington.

Best game: LSU vs. Wisconsin at Green Bay. No Big Ten team has a more daunting season opener, as the Badgers take on LSU in historic Lambeau Field. These teams opened vs. each other in 2014, as the Tigers took a 28-24 win. LSU is 3-0 all-time vs. the Badgers. Adding spice to this opener: Former Wisconsin DC Dave Aranda is now running the Bayou Bengal defense.

Player on the spot: Minnesota QB Mitch Leidner had his cranky left foot repaired in the offseason and looks primed for a big senior season. But, for Leidner and the Gophers to have a special season, they need to ease by a potentially dangerous Oregon State squad on Thursday night in Dinkytown. Leidner needs to pump air into a Minnesota aerial game that too often struggles.

Best matchup: LSU RB Leonard Fournette vs. Wisconsin LB Vince Biegel. Fournette is a devastating combination of power and speed who may be the best tailback in college football since OU?s Adrian Peterson. Biegel, of course, will need help-lots of help-if the Badgers want to slow down the Bayou Bengal freight train.

Best QB matchup: Nothing jumps out. Let?s go with Western Michigan?s Zach Terrell vs. Northwestern?s Clayton Thorson. Terrell was No. 23 in the nation in passing yards last year with 3,510 to go along with 29 TDs. Thorson had modest numbers in his first season as a starter last year but still led the Wildcats to a 10-win season. He could be poised for a breakout season.

Best coaching matchup: I like Fresno State?s Tim DeRuyter vs. Nebraska?s Mike Riley. Each guy is proven. DeRuyter has done a good job, notching a 29-23 mark in four seasons on the job with three bowls. But the Bulldogs failed to reach the postseason last year. Riley is coming off a tough 6-7 debut filled with many tough losses but looks primed for a break out after a 3-1 finish and bowl win vs. UCLA.

Best coordinator matchup: It will be good theatre to watch former Wisconsin defensive coordinator and current LSU DC Dave Aranda face his former team. He pushed the buttons on one of the top defenses in the nation the last few years in Madison. Joe Rudolph is the Wisconsin OC, but head coach Paul Chryst runs the attack. Chryst and Aranda know how each other operates. Who has the edge?

Best chance for an upset: The Wildcats need to be careful vs. Western Michigan. Broncos boss P.J. Fleck is an up-and-coming coaching fireball who always preaches to ?row the boat.? He played at Northern Illinois, is a native of the state and has his Bronco program rolling. You know the 35-year old would love to topple the Wildcats. Fleck has taken his team to consecutive bowls and 8-5 records and won the MAC West in 2015.