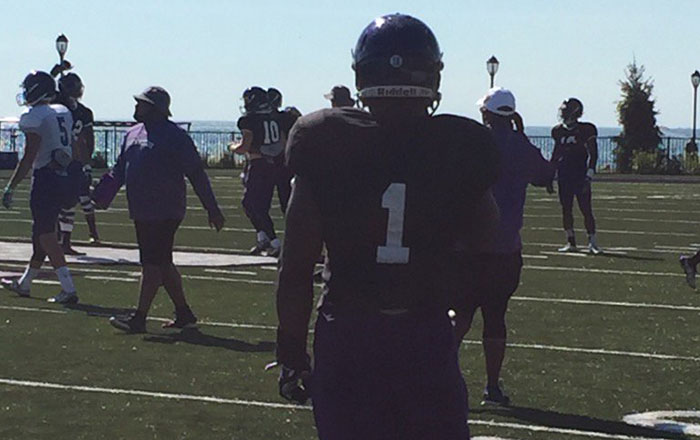 EVANSTON, Ill. — This was a high-spirit practice with a lot of enthusiasm from the players, who actually made practice fun.

This is the deepest and most talented Northwestern team that I have seen in my five years on the tour. But can the Wildcats win 10 games again? It's doubtful, however that doesn't mean the Wildcats won't have another strong season.

Get my fun takes from Northwestern's Tuesday practice below.

Most impressive player: RB Justin Jackson looked to be in midseason form, showing the vision and cut-back ability that has made him famous.

Anthony Walker looking the part. Significant improvement physically from a year ago pic.twitter.com/dcqqwOcW6w

Loudest coach: For a head coach, Pat Fitzgerald gets after it. He looks like he could still play.

Impressive newcomer: True freshman Ben Skowronek is a 6-4 target who is turning heads. He may be a factor for a corps that needs help.

On the rise: Garrett Dickerson. He?s the new superback with Dan Vitale gone. And he could be in store for a breakout season.

Under the radar: Tyler Lancaster. The DT is a strong man who is a force vs. the run and gets a push as a pass rusher.

Number: 19.5, points allowed per game last year by Northwestern, its lowest in a season since 2006, which was Pat Fitzgerald?s first season.

If you haven't seen pictures or video of Northwestern's new practice field, trust me, it lives up to the hype. It's situated steps away from Lake Michigan, running parallel to it, and the beautiful Chicago skyline is off in the distance. Picturesque, indeed.

A good look at the palatial @NUFBFamily practice venue. pic.twitter.com/5vzlsyjNf4

Clayton Thorson had his moments. He showed good accuracy at times. And not so good at other times. He needs to take the next step in his development if NU wants to make a move in the West Division. The guy has a nice arm and added confidence.

The depth at running back is good. Is Justin Jackson the top RB in the Big Ten? Maybe. He looked good today. Vision, shiftiness and jump cuts are his calling cards. He?s not the biggest guy. Jackson is the fifth player in school history with consecutive 1,000-yard rushing seasons. His 1,418 rushing yards in 2015 were the sixth-most in school history in a single season. He also had seven 100-yard rushing games. He?s also sixth on the school?s all-time rushing list. John Moten is really coming on and adds some speed. Warren Long is a tough, physical back.

Say "hello" to perhaps the best RB in the Big Ten: Justin Jackson of @NUFBFamily. pic.twitter.com/War0JFGXnh

An area to watch on defense is the end slots with Dean Lowry and Deonte Gibson gone. Can Ifeadi Odenigbo finally put it all together? Xavier Washington also must emerge. Joe Gaziano and Trent Goens also are pushing for time. The tackle spot is strong. C.J. Robbins and Jordan Thompson were out today but figure in the mix. Tyler Lancaster may be the best of the bunch. He?s the strongest player on the team and a real underrated commodity.

This will be one of the Big Ten?s better linebacking corps. Anthony Walker is the stud. In fact, he may be the best linebacker in the league. He is flanked by Jaylen Prater and Nate Hall. Joseph Jones is having a good camp.

The secondary received a blow when CB Keith Watkins was lost for the season with a knee injury suffered in a non-contact situation. Montre Hartage has stepped in. Trae Williams is the nickel back. Godwin Igwebuike is a hard-hitting safety with All-Big Ten potential. He forms a nice tandem with Kyle Queiro.

The receiving corps needs to come on. It has underperformed in recent years. There is potential here and plenty of numbers. Austin Carr is the No. 1 option, but keep an eye on Flynn Nagel and Andrew Scanlan. And Charlie Fessler is having a good camp. Marcus McShepard (secondary) and Solomon Valut (running back) have been moved to the spot in recent years. They add some speed. Keep an eye on true freshman Ben Skowronek, a big target who may crack the rotation. Riley Lees is another promising frosh. And with Dan Vitale gone, NU needs superback Garrett Dickerson to step up his game.

Solomon Vault and the @NUFBFamily WRs need to step up this year. pic.twitter.com/vVxtKd5WmZ

The offensive line was a weak spot a few years ago but is improving and looks solid. NU has had a strong game of late, and this unit needs some credit. Black Hance is an anchor at left tackle with Connor Mahoney at left guard, Brad North at center, Tommy Doles at right guard and Eric Olson at right tackle. Guard Ian Park is out with a bad foot; Shane Merz also is out with injury.

BTN Camp Tour #Northwestern Off has made a lot of progress at WR, QB will be better, Jackson special – O line needs to catch up to the rest