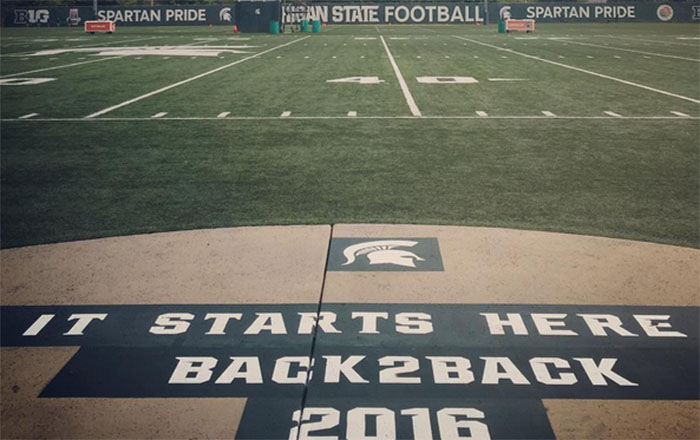 Time to answer some mail! How good are the Minnesota linebackers? Will Michigan topple a rival this season? Is David Blough the answer to Purdue's QB ills?

I look at those questions and more.

I have been impressed by Minnesota's linebackers and think they will be among the best in the Big Ten. What do you think? – Bill White

I like the Gopher linebackers when I watched the team scrimmage last Saturday. Jack Lynn has All-Big Ten potential, and Cody Poock is a tough player who excels vs. the run. Jonathan Celestin rounds out the unit. He's a nice athlete. Among the schools I have seen so far, I like the LBs at Penn State, Iowa, Ohio State and Michigan State better than Minnesota's. Still, it's a nice group.

G Vincent Calhoun is one of three JCs who bring needed size, strength and toughness to the @GopherFootball OL. pic.twitter.com/kLMbF2qSGB

Under Mike Riley, do you see the Huskers becoming a potential Big Ten championship contender? – Jon

Heck yes. As Riley continues to accumulate talent that fits his schemes, Nebraska will get better. I think once you see QBs like Tanner Lee and Patrick O'Brien take over the offense, the attack will be even better. No offense to Tommy Armstrong, but Lee and O'Brien are cut more from the skill-set mode to succeed in Riley's offense. Each is a talented passer. Can't wait to see them in 2017. Will be a good battle next spring.

Do you think Michigan can win a least one of the rivalry games this year? – Ron Swantek

Michigan has talent, but I'm not sure if it will have what it takes to topple Ohio State or Michigan State this season. But perhaps the biggest obstacle for the Wolverines is the fact they must play at East Lansing and at Columbus. The Buckeyes have dominated this series of late, going 12-2 since 2001 and winning the last four meetings with a 42-13 triumph last season. The last time Michigan won in Columbus? In 2000, when the Wolverines took a 38-26 decision. The Spartans are 7-1 in the last eight games vs. Michigan, which hasn't won in East Lansing since 2007.

No. This is a pivotal year for Darrell Hazell, who is 6-30 in three seasons. He needs to show some progress, especially with a new athletic director on board. And Blough gives Hazell the best chance for success. The sophomore played in 10 games in 2015 and started eight, as he beat out redshirt freshman Elijah Sindelar in camp. Blough shows promise. And it has to help that new OC Terry Malone has simplified the offense. Bough will have a potentially good set of wideouts to throw to and will be protected by a solid line. Bottom line: There is some potential for the Purdue offense, which has changed QBs each season under Hazell.

David Blough was named the starting quarterback Monday morning. Hear what he said after the announcement. #BoilerUp https://t.co/3aGnqo4VJG

I have followed Iowa very closely, and the lack of talk about the secondary is surprising. This is the best Hawkeye team since 2002, if it stays healthy. Look forward to hearing your prediction of the Michigan game, which I believe will be their only loss. – Jeremy Hackenmill

I have thrown praise at the Hawkeye secondary. In fact, I have said I think Iowa could have the best set of DBs in the Big Ten. It begins with a boffo CB duo of Desmond King-the reigning Thorpe Award winner-and Greg Mabin. And I love safety Brandon Snyder, who I think will be a star. Mile Taylor is the other safety. As for the Michigan game, why can't Iowa beat the Wolverines in Iowa City? Know this: Iowa has four of the last five vs. the Wolverines, including three in a row in Kinnick.

How many games do u see Nebraska winning? I think, conservatively, eight wins and a bowl game are possible. But my lofty expectation is 10 wins with bowl. – Mark Lyons

A fast start is possible, as the first three games are at home and four of the first five are in Lincoln. The road game in that stretch? At Northwestern. Long story short, the Cornhuskers could be 6-1 or 7-0 when they play at Wisconsin on Oct. 29. As you said, eight wins looks very possible. Let's go with a 9-3 record, which would net a nice bowl and be a good rebound season from last year's 6-7 clunker in Mike Riley's debut.

Yes, Connor Cook was an all-time great, but the Spartans have some nice options under center. Tyler O'Connor figures to be the man this fall. He showed his skills in starting and leading MSU to a huge win at Ohio State in 2015. He's a fifth-year senior who is ready. And Damion Terry figures to be used in some fashion. And the future is good with redshirt freshman Brian Lewerke. True freshman Messiah deWeaver impressed me when I went to watch the Spartans practice. He can throw it.