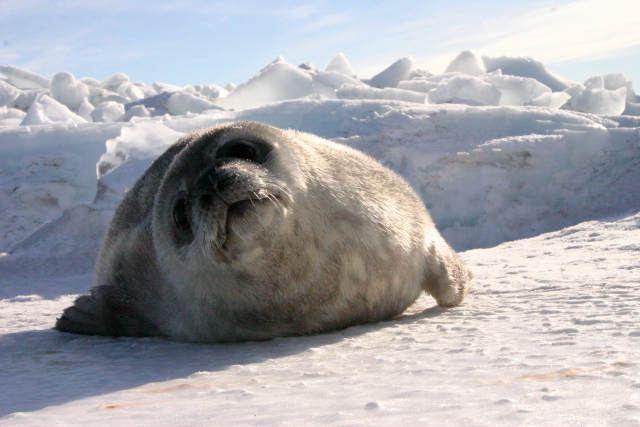 It used to be that in order to understand the habits of a certain animal population - say, seals - that lived in a far-away and unforgiving climate - say, Antarctica - researchers had to fund a costly expedition through unforgiving environmental conditions. That's if it was even possible to get there at all.

Now they can just ask you for help while you're checking Facebook. No parka, passport or PhD required.

University of Minnesota researcher Michelle LaRue leads a group of scientists conducting a census of Antarctica's Weddell seal population. She and her team are trying to determine both the number and locations of the seals by reviewing thousands of satellite images of more than 11,000 miles of Antarctic coastline-and they can't do it alone.

"There's literally no other way to do this," LaRue says. It's a more than a one-or even 100-person job. There are thousands of images to sort through and the project needs accurate data from many, many pairs of eyes.

Why is it so important to learn about seals that live thousands of miles away-about as far south as you can possibly go on Earth?

First, scientists don't know much about Antarctica's Weddell seals, save for one specific group on a small island off the coast of southern Antarctica.

LaRue's research is focused not just on the small Erebus Bay area, but on the much larger surrounding area of the Ross Sea. [We] know almost nothing about the seals elsewhere. We don't know where they are, how many there are, we don't know what causes their populations to go up and down."

There are also the conservation implications of this research and LaRue says the Weddell seals are an important environmental indicator.

Traditional methods of counting animals in such a harsh climate have been done by helicopter, or sometimes by boat, but even then ice only allows them to get so close to the shore. With all the various impediments for collecting this kind of information, LaRue and her team are excited to get access to satellite images that provide an unobstructed view of the landscape.

LaRue's project was funded in March and seal counting officially began mid-July. LaRue said that she has used similar high-resolution imagery to determine penguin populations in Antarctica, but this is this first time the crowdsourcing application Tomnod has been used to open up an animal-counting process to the public.

"I heard about Tomnod through the DigitalGlobe Foundation (the organization that researchers can license satellite imagery from)," she said. Tomnod has also been used to map populations in Ethiopia and search for Malaysia Airlines Flight 370 that disappeared over the Indian Ocean in 2014.

LaRue is thrilled that the seal counting has gotten off to a great start. "We've had a lot of engagement, which I'm really happy about. The last time I checked we had more than 3,000 people helping, and the places we've asked people to look at have been covered somewhere around nine times completely-which is absolutely incredible."

LaRue is not only pleased with the number of people participating but the accuracy of the data they're submitting. LaRue says that she can already tell that people are finding seals where they should be finding them. "It was fun to see the heat map [version] of where people are counting seals and the heat map was exactly where they should be. So crowds are good at this!"

LaRue explains that while they're off to a great start, they still need the public's help. "We're still adding imagery all the time, so keep going, keep counting and looking for them. We've got a lot of years [and area] to cover so it's going to take a while."

She also encourages folks to be patient. "There's a lot of sea ice you have to look through before you get to a seal. I logged onto the forum that allows me to talk to people who have questions and a few people say, 'Man, I've gone through a couple hundred maps and I haven't seen any seals yet.' I tell them to find a crack in the ice and follow that."

It's an experience few might have had before, now available to thousands.