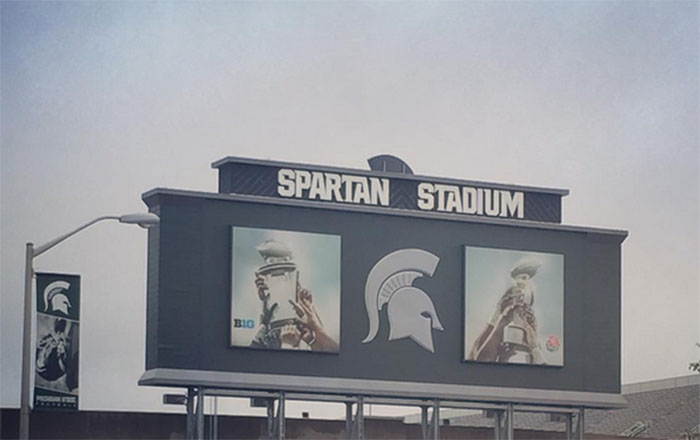 The letters are flowing in as I am on the road for the Big Ten camp tour. I have questions about Penn State's depth, Michigan State's ability to develop talent and Michigan's chances to beat Ohio State this season, among others. Let's go!

[ MORE: Get all of Tom Dienhart's BTN bus tour coverage ]

Although Michigan State doesn't get a lot of four- and five-star recruits, it can develop players. Would you say that is a credit to the coaching staff? Mark Dantonio and his coaches have been together a long time, and I believe they really have a family atmosphere which the players enjoy and embrace. – Robert Keto

Few programs are better at developing talent than Michigan State. This is one of the best staffs in the Big Ten-if not the nation. Time and again, the Spartans develop three-star recruits and turn them into top-flight college players. Staff continuity has been big for MSU. Co-defensive coordinator/DB coach Harlon Barnett, o-line coach Mark Staten, OC/RB coach Dave Warner and co-DC/LBs Mark Tressel all are still on staff after arriving in East Lansing from Cincinnati with Dantonio. That is big.

When you visited Michigan State, how did the offensive line look? – Derek Lado

The offensive line will be OK. Michigan State must replace three starters on the front, two of whom were All-Americans. Left tackle Jack Conklin was a first-round pick of the Tennessee Titans while guard Donavon Clark was taken late by the San Diego Chargers and center Jack Allen signed with the New Orleans Saints. David Beedle is penciled in to take over for Conklin. Keep an eye on redshirt freshman Cole Chewins. Brian Allen has been flipped from center to left guard. Kodi Kieler has been a tackle by trade but has flipped to center. He's a big center. Others to watch are guard Brandon Clemons and tackle Dennis Finley, along with tackle Miguel Machado and guard Benny McGowan. Line coach Mark Staten will get this group into shape. He's one of the best.

Is Penn State building depth? Is it finally to a point where it can start building a program to compete? I know the Nittany Lions do not have the talent of Michigan, Michigan State, Ohio State and others. But is the arrow regarding talent pointing upward? – Tom Kirk

Depth is improving in State College, Pennsylvania. James Franklin has a full allotment of 85 scholarships. The problem? A lot of the roster is young. The roster is dominated by freshmen and redshirt freshmen. Check this out: 49 players on the roster are either true or redshirt freshman (24 true, 25 RS). This program still may be 1-3 years from competing for the title in the rugged Big Ten East.

Is Vayante Copeland an elite CB, or was he just good in his short time at the beginning of last year for Michigan State? I think he could be the next great Spartan corner. –  Ben

I agree. He looked good when we went to Michigan State practice. He is recovered from a broken neck and looks good. He and Darian Hicks will form one of the better CB duos in the Big Ten. In fact, the secondary in East Lansing looks very good with Montae Nicholson and Demetrious Cox at safety.

Are the Huskers going to be any good this year? – Terry

Nebraska has a shot to win the Big Ten West. But the big key will be how well both lines develop, especially the defensive line. And QB Tommy Armstrong needs to limit mistakes. Armstrong has plenty of experience and is a primo athlete, but he still makes some dubious decisions with the ball. He had 16 picks last year; he has 53 career TD pass and 36 picks.

The Nittany Lions suffered some big attrition with Anthony Zettel, Austin Johnson and Carl Nassib all gone to the NFL. There is some talent at end with the likes of Garrett Sickels, Evan Schwan, Torrence Brown and Curtis Cothran, among others. Inside, Penn State has Antonie White, Parker Cothran and Kevin Givens, who could be a good one. JC Tyrell Chavis also is one to watch. Bottom line: This should be a solid unit, but I don't see it being as good as last season's d-line.

My question: Do you think Michigan can beat Ohio State? – Ken Priebe

Can it? Sure. Will it? Probably not. While the Wolverines are stockpiling some talent under Jim Harbaugh, I don't think they are ready to topple the Buckeyes yet. Michigan can't match OSU's talent. Plus, the game this season will be in Columbus. Recent history hasn't been kind to the Wolverines in this series. The Buckeyes have dominated this series of late, going 12-2 since 2001 and winning the last four meetings with a 42-13 triumph last season. The last time Michigan won in Columbus? In 2000, when the Wolverines took a 38-26 decision.

Do you think Jim Harbaugh will use a two-quarterback system this year at Michigan? – Tim Swartz

The battle is between John O'Korn and Wilton Speight. I don't think Jim Harbaugh will play two QBs. I believe he wants one guy to win this job. Who will take it? I think it may end up being Speight. He is a big man at 6-6, 240. But he moves just well enough to avoid pressure. And he has a nice arm. Limiting mistakes will be key.