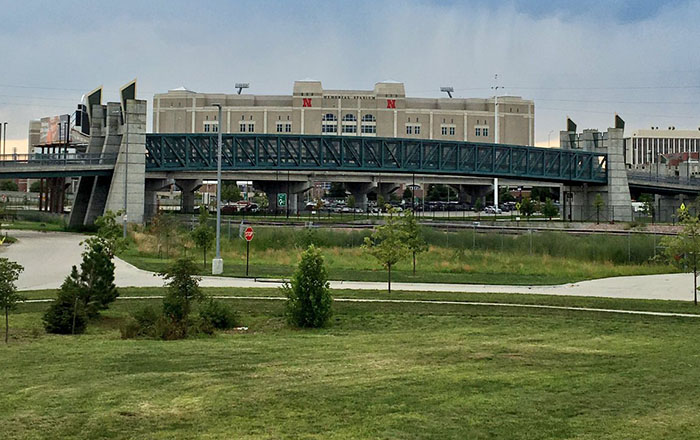 LINCOLN, Neb. — Stop No. 9 on the BTN bus tour brought us to Nebraska practice Thursday.

[ MORE: Dienhart: Here's what I learned at Nebraska practice ]

The Cornhuskers, fresh off a 6-7 season in Mike Riley's debut, return plenty of talent on a team trying to dethrone defending Big Ten West champ and rival Iowa.

Check out some of my fun takes from Nebraska practice below.

Most impressive player: QB Tommy Armstrong knows this is his team. He?s confident and loaded with experience. A big season could loom.

Loudest coach: New defensive line John Parrella?s intensity goes past 10 to 11. Spinal Tap would like that.

Impressive newcomer: So many to choose from. But I liked true freshman running back Tre Bryant, who just may force his way into the rotation.

Top specimen: I have not seen a more monstrous player on the tour than offensive tackle David Knevel, 6-9, 315-pound behemoth.

On the rise: Sophomore LB Dedrick Young is a future star and All-Big Ten player. A terrific talent with speed and athletic ability.

Nagging question: Can the defensive line hold up and develop?

Under the radar: Keep an eye on true freshman corner Lamar Jackson, who will figure in the secondary and could be headed for big things down the road.

Did you see this? Tommy Armstrong airs it out, and it's right on the money!

Part 2. No garbage can is safe with a determined @Tommy_Gun4 in the building. pic.twitter.com/HBVOGgyd2L

Some staffers were wearing tribute shirts for Sam Foltz that had a 27 with SF on it. And ?27? was on the 27-yard lines of the practice field.

Tribute to #27 Sam Foltz – his initials on the 27 yard line as punters get loose. His presence definitely felt here pic.twitter.com/DdDJTfoq2G

The defensive line has a lot to prove. On this day, the unit started Freedom Akinmoladun and Ross Dzuris-a former walk-on–on the ends with Mick Stoltenberg and Kevin Maurice inside. Tackles Maliek Collins, Greg McMullen, Kevin Williams and Vincent Valentine are gone. Still, the Huskers could be OK on the interior, as Davis twins Carlos and Khalil look good for redshirt freshmen. But keep an eye on the ends. Can this team generate a pass rush without benefit of a blitz? Stay tuned. A.J. Natter, Sedrick King and Alex Davis are other options at end.

I like this linebacking corps. Josh Banderas is an anchor in the middle. And Michael Rose-Ivey-who has been dealing with a knee issue–covers a lot of ground. But the best of the bunch is Dedrick Young, a sophomore who looks headed to stardom. Marcus Newby provides depth along with Chris Weber, who is dealing with a concussion.

The secondary has potential. Brian Stewart is just coaching corners. He says Josh Kalu is best vs. the run and Chris Jones is best vs. the pass. Nathan Gerry is a bellwether at a safety slot. Aaron and Kieron Williams (not related) are other options at safety. And Stewart is excited about true freshman Lamar Jackson, who is working at corner. He looks special. The guy wears No. 1, so that should tell you something.

Is this the best WR corps in the Big Ten? It could be. Jordan Westerkemp didn?t work out today, but he?s the leader and will leave campus as an all-time great. This is a deep unit that also has Alonzo Moore, Stanley Morgan, Brandon Reilly and De?Mornay Pierson-El, who is coming off foot and knee injuries. The staff considers the aforementioned WRs all to be ?No. 1s.? True freshman Derrion Grim is turning heads. Cethan Carter and Sam Cotton are solid vets at tight end. I love this group.

Tommy Armstrong is what he is at this point: a solid passer with a strong arm who can make plays with his feet, all while struggling with turnovers. The staff needs to play to his strengths, as there is a lot of skill-position talent around him. The future looks bright at the position with Tulane transfer Tanner Lee and true freshman Patrick O?Brien. Those guys can really spin the ball. Can?t wait to watch them battle for the job one day.

There is no shortage of good, veteran running backs. Terrell Newby led the way on RB drills today. Devine Ozigbo, a 230-pound load, followed and then Mikale Wilbon, a small, quick back, took his turn. A nice trio with different skills. The staff would like to redshirt true freshman Tre Bryant, but he may make it difficult to do. The kid is good. Newby led the way with 765 rushing yards in 2015. It was the first time since 2008 that Nebraska didn?t have a 1,000-yard rusher. In fact, those 765 yards were the fewest by a Nebraska leading rusher since Monte Anthony ran for 723 yards in 1975. I think NU will have a 1,000-yard back this fall.

There is no shortage of good, veteran RBs for @HuskerFBNation. But true frosh Tre Bryant still may push for time. pic.twitter.com/lsf7xvlre1

The offensive line is coming together. Nick Gates is the best of the bunch at left tackle. And Dylan Utter should be one of the Big Ten?s better centers. The guards are Tanner Farmer and Jerald Foster, who was limited today. Corey Whitaker is another option at guard. The right tackle is David Knevel, a 6-9 sun blocker.

BTN Camp Tour #Huskers Off ahead of the def – off line ahead of def line. Wins will be mostly based on how good the offense develops.

Turnovers have been an issue at Nebraska for a long time and that continued last season. The Huskers turned the ball over 27 times in 2015, which was tied for the second-most among power conference teams. The Huskers are also fifth nationally in turnovers over the last eight seasons. The staff harps on protecting the ball.

Another issue: penalties. Nebraska was the most penalized team in the Big Ten in 2015. In fact, the Huskers led the conference in penalties, penalties per game and penalty yardage. More discipline and attention to detail are needed.

Had a blast doing this Facebook Live with Nebraska WR Jordan Westerkamp, a highlight waiting to happen. Hope you enjoy it, too.