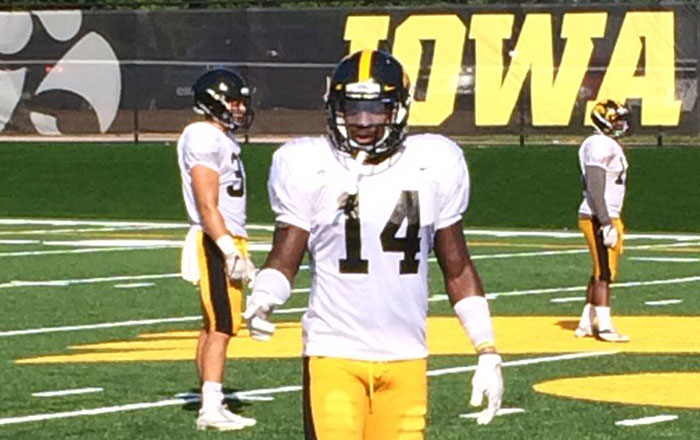 The Hawkeyes return an abundance of talent on both sides of the ball, led by senior quarterback C.J. Beathard on offense, and Jim Thorpe Award winner Desmond King on defense.

You could see the intensity in Wednesday's practice, as it was the most physical practice that I have seen so far this tour.

Here are my fun takes from Wednesday's Iowa football practice.

Most impressive player: QB C.J. Beathard looked sharp. He is a savvy senior who has command of this offense. He was sharp on his throws. Could he be the best QB in the Big Ten?

Top specimen: Few running backs are put together as well as LeShun Daniels.

Loudest coach: It was a tie between offensive coordinator/o-line coach Brian Ferentz and WR coach Bobby Kennedy. Those two get after it. Love the passion and intensity.

On the rise: Sophomore WR Jay Scheel is coming on and was running with the first team. At 6-1, 195, he is a nice-sized target.

Best drill: There were plenty. The one-on-one battles between defensive linemen were good theater with lots of hitting and wrestling.

Under the radar: Safety Brandon Snyder is a former walk-on who is a hard-hitter cut from the same mold as so many other former tough Hawkeye safeties.

This was by far the most intense and physical practice that I have seen so far on the tour. There was lots of heavy hitting and contact. At one point, stud CB Desmond King laid out a ball carrier with a heavy hit. You can see how this program gets its tough edge. The coaches? They set a tone for hard, rugged play. It was impressive. This is how Kirk Ferentz forges his classic hard-nosed Iowa teams.

The big concern on defense? Getting a rush off the edge with Drew Ott and Nate Meier gone. Parker Hesse looked good when forced into action last year. And Matt Nelson is a 6-8 pterodactyl, but he missed today?s workout. Anthony Nelson is another rangy (6-7) edge guy. Long story short, the Hawkeyes may need to manufacture a rush this season with some blitzes. Stay tuned.

The offensive line will be very strong once again. Brian Ferentz loves James Daniels, who got his feet wet as a true freshman last year. Daniels is a stud who missed today?s workout but Ferentz says will play center. The left side of the line will have Cole Croston at tackle and Boone Myers at guard (he also can swing to tackle). Croston is a former walk-on who has added 80 pounds. The right tackle is Ike Boettger. He was a high school QB that Iowa has transformed. The right guard is Sean Welsh, who Ferentz thinks should have been All-Big Ten last year. Depth isn?t great.

Always interesting to see where the head coach spends the most time. With Kirk Ferentz at Iowa, it's line play pic.twitter.com/Y68c3xyg9e

The tackle spots look good with Jaleel Johnson an anchor up front. He will be an NFL player. Faith Ekakitie also looks strong with Nathan Bazata another stalwart. The top d-line today was: Hesse, Bazata, Johnson and Anthony Nelson.

The receiving corps is key. C.J. Beathard lost his big play threat in Tevaun Smith. However, he still has his leading receiver back in Matt VandeBerg, who led the team in catches (65) and yards (703) in 2015. Riley McCarron is another vet option. Keep an eye on Jay Scheel, a sophomore who WR coach Bobby Kennedy says has made a move. And true freshman Devonte Young will play, according to Kennedy. Jerminic Smith needs more consistent hands but has potential. Iowa needs to replicate the big-play explosion it found last year. That?s where these wideouts must figure in. In 2015, the Hawkeyes had 17 plays of 40-plus yards, which is more than they had combined in 2012 and 2013. Iowa also scored eight touchdowns on drives of two players or fewer.

Iowa has reliable tight end George Kittle returning. Kittle?s six touchdown catches last season were tied for the most by an Iowa tight end in the Kirk Ferentz era. This is a program that has a legacy of producing top TEs. Kittle could be the next. He?s a lithe athlete-a ?move? tight end of sorts–who is Jess Settles? cousin. He may be one of the Big Ten?s best. Look for true freshman Noah Fant to have a shot to play this fall.

This secondary could be very good. Is there a better CB tandem than Desmond King and Greg Mabin? Nope. Mabin is a really underrated talent. And keep an eye on safety Brandon Snyder, a former walk-on who is a classic heavy-hitting Hawkeye safety. He will be fun to watch. Miles Taylor is the other safety.

There can?t be many Big Ten linebackers better than Josey Jewell. The guy is a dervish who covers a lot of ground. Ben Niemann also holds his own. Bo Bower and Aaron Mends also look good for an underrated corps.

BTN Camp Tour #Hawkeyes Appears they have the talent at LB to build the depth they need. Amani Jones one of young guys who could be in mix

A resurgent ground game was big last year. And, the rushing attack could be even better this fall. No shortage of options in the ground game with LeShun Daniels, Akrum Wadley and Derrick Mitchell back, among others. Can Daniels says healthy? He has had problems making it through the grind of the season. Look for one of two true freshman RBs to play: Toks Akinribade or Toren Young. Iowa finished fourth in the conference in rushing last year, averaging about 182 yards. It was the first time the Hawkeyes finished higher than sixth in the Big Ten in rushing since 2008. Iowa needs another strong effort. And it has the personnel to do so.

There were scouts from the Bears, Chargers, Cowboys, Texans and Saints on hand.

Iowa great and BTN?s own Chuck Long also was in the house sipping coffee on a 90-degree day while watching Iowa practice. He?s my kinda guy!

.@ChuckLongIowa hangs out with a pretty cool crowd at practice. pic.twitter.com/W1qhRgLPpL