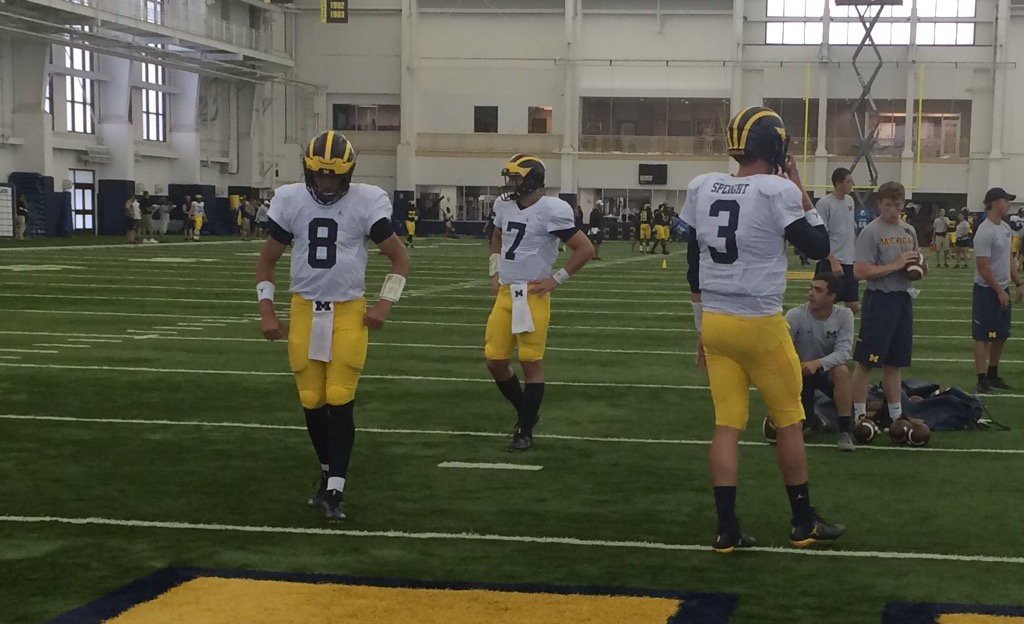 ANN ARBOR, Mich. — Excitement is running high in Ann Arbor, as Jim Harbaugh continues to prime the pump for a Michigan program that is loaded with potential.

The talent level continues to rise, but are the Wolverines really ready to win the Big Ten East? The schedule is challenging with road game at Iowa, Michigan State and Ohio State, but there aren?t many glaring personnel issues for Harbaugh?s second edition.

Here is what I learned at Michigan practice.

1. The offensive line will be good. The unit never got traction under Brady Hoke. It makes strides last year. Now, the front will be good-maybe the best at the school in a decade. Mason Cole looks comfortable at center after moving from left tackle. Senior guards Kyle Kalis and Ben Braden are powerful forces. Senior Erik Magnuson is a pile driver at right tackle. All three are fifth-year seniors. The key: sophomore left tackle Grant Newsome. Can he handle this key position?

2. The d-line is as good as advertised. The hype machine has been rolling for a while to the point where some think the Wolverines may have the best defensive line in America. It could be with the likes of Ryan Glasgow and Bryan Mone inside and Chris Wormley, Taco Charlton and freshman stud Rashan Gary on the edge. Depth is impressive. This unit will come at foes in waves. Glasgow and Mone could be especially formidable on the interior.

3. The linebacking corps has been overhauled and called the biggest area of concern by some on the Michigan defense. Things could be just fine. Jabrill Peppers has transitioned to an outside linebacking spot, but he figures to line up in a variety of spots. He will be a real wild card. Inside, seniors Ben Gedeon and Mike McCray will be anchors. I like true freshman Devin Bush. The kid can move.

4. The quarterbacks are interesting. There is no shortage of options, but the race should essentially come down to Houston transfer John O?Korn and junior Wilton Speight. O?Korn has the best skills, showing savvy and a rocket arm. Speight is skilled but is a bit more of a pedestrian and lacks the upside that O?Korn possesses. Still, don?t underestimate Speight in this race. He can move well for being 6-6 and has a nice arm.

John O'Korn, Shane Morris and Wilton Speight all are taking reps with the first team for @UMichFootball. pic.twitter.com/szbZgIBqNU

5. The receiving corps is top notch and led by seniors Amara Darboh and Jehu Chesson. Sophomore Grant Perry and junior Drake Harris are good options, too. And keep an eye on Maurice Ways, who is a big target. Throw in Jake Butt, maybe the best tight end in America, and the new Michigan quarterback won?t have a lack of quality targets.