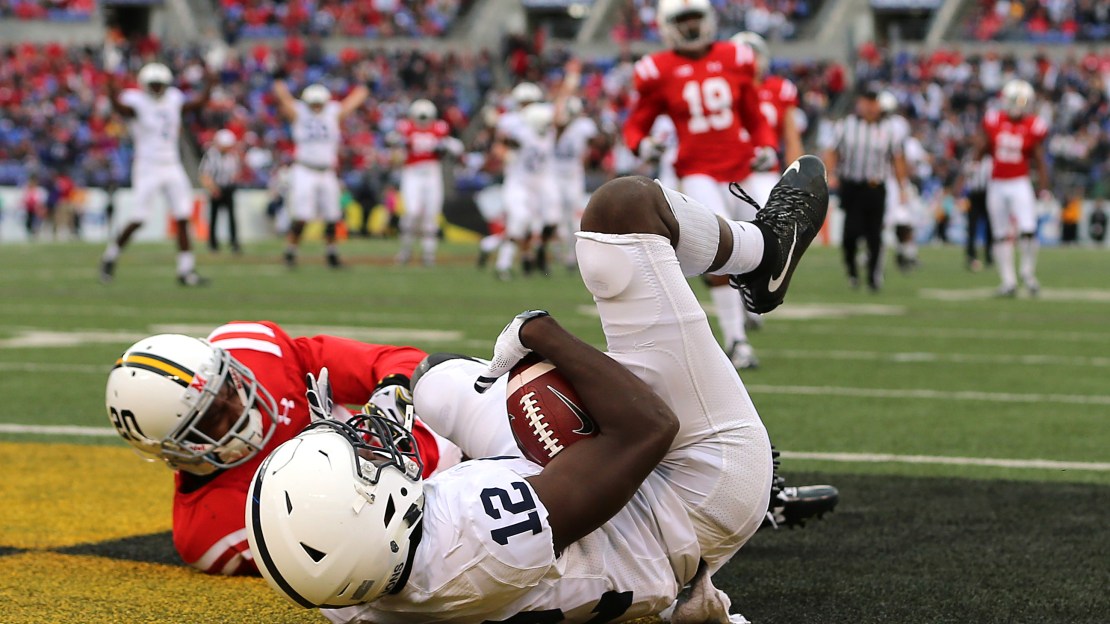 Let?s answer some mail. Are new spread attacks at Penn State, Rutgers and Maryland different? Can Maryland start 6-0? How long before Michigan is battling for national titles? I look at those queries and more. Let?s go!

[ MORE: Get all of Tom Dienhart's summer football tour coverage ]

Having watched all three practice, I didn?t notice a big difference between the three. I asked cohort Gerry DiNardo for his option. He says Rutgers? spread is like Ohio State?s. Maryland?s is like Oregon?s. And Penn State?s is a combination of the two. Joe Moorhead runs the attack at Penn State and wunderkinds Walt Bell at Maryland and Drew Mehringer at Rutgers. Each are spread attacks built around a strong running game. And athletic quarterbacks are needed. It?s all about being multiple and creating gaps in defenses, which are forced to play the entire field. It should be fun to watch.

Mike Weber does not seem as big as Carlos Hyde or Ezekiel Elliott (not that size always dictates running style). Will Ohio State perhaps attack the edges more with a Curtis Samuel or Dontre Wilson — like Urban Meyer did at Florida with Percy Harvin and others — or continue to go up the middle with Weber? – Matthew Wilson

Weber is listed at 5-10, 212. That is smaller than Carlos Hyde (6-0, 235) and Ezekiel Elliott (6-0, 225). Still, I think you?ll see Weber used in a similar fashion as Hyde and Elliott. He?s a tough runner who can work inside and also hit the edge. And no doubt, I think you?ll see Samuel and Wilson used in the backfield. The staff surely wants to get them the ball in space and on the edge, too. They have so much speed.

The @OhioStateFB backfield will look a lot different.@DougLesmerises offers his take on how it will play out. https://t.co/XhYW1CYLi5

Against everyone's doubts, I deeply felt Jim Harbaugh would come to Michigan and make an immediate impact. How long do you think it will take Michigan to compete for the national championship? – Doug

I admit: I was a bit surprised to see the Wolverines win 10 games in Harbaugh?s debut. As for competing for the national championship, Michigan could be on that stage this year, but let's say it's two or three years away. (Jim Tressel won it all in his third season, for what it?s worth.) By then, Harbaugh will have a roster stocked with players he has recruited-and coached. If Michigan keeps recruiting like it has the last two years, it could have a scary-good collection of players in Ann Arbor that?s ready to win the Big Ten-and battle for the national crown.

Clearly there is a talent gap between the top and where Rutgers is right now. Being that RU and Maryland will be measured against each other for a while, would you put either program ahead of the other at this point after the practices you just watched? – Chris

Yes, each program arrived in the Big Ten in 2014. And now, each program changed coaches at the same time, with Chris Ash at Rutgers and DJ Durkin at Maryland. We parachute in for one day of practice. So, you hate to draw any grand conclusions about one practice. Each program looks to be in similar shape. Neither Maryland nor Rutgers is total rebuild projects. There is talent on both campuses. But I may give Rutgers a slight edge because the Scarlet Knights are in better shape on both lines than Maryland. And I like RU?s quarterbacks better than Maryland?s. But, again, there isn?t an appreciable difference between these programs as 2016 dawns.

Any hunch on the Rutgers QB battle? I know it was rumored that TCU transfer Zach Allen was signed to hopefully light a fire under Chris Laviano, but they've been splitting first-team snaps. Meanwhile, Hayden Rettig just can't seem to break through. – Ben

Laviano and Allen both had their moments when we were at camp. Each seems to be a nice fit for the new spread offense of coordinator Drew Mehringer. I like Allen. He is a good-looking athlete who can run. And he seemed to throw the ball a bit better than Laviano. No doubt, the competition is good for both guys-and the team. Look for Allen to win out. Rettig? He has slide down the depth chart after arriving amid hype from LSU.

I think it's possible that the Terps can win every game up until when we play Michigan State. What do you think ? A 6-0 start? – Ron Benton-Klein

Let?s take a look. Maryland?s first six games are Howard, at Florida International, at UCF, Purdue, at Penn State, Minnesota. So, to answer your question, I say ?yes.? The Terps could be 6-0 when Michigan State comes to College Park on Oct. 22.

How does a Will Likely and JC Jackson cornerback combo at Maryland rank in the B1G? – Swaggerterp

This could be a pretty formidable duo. Some Maryland watchers think Jackson may be the best player on the team-and just got on campus a few days ago. Some other good duos will be Michigan?s Jourdan Lewis and Channing Stribling, Iowa?s Desmond King and Greg Mabin, MSU's Vayante Copeland and Darian Hicks and Nebraska?s Chris Jones and Josh Kalu. But, in the end, Maryland?s tandem may reign supreme.

Pretty clear there will be a place in secondary for recently cleared JC Jackson – lot of praise from coaches pic.twitter.com/sY4vVgcqfP