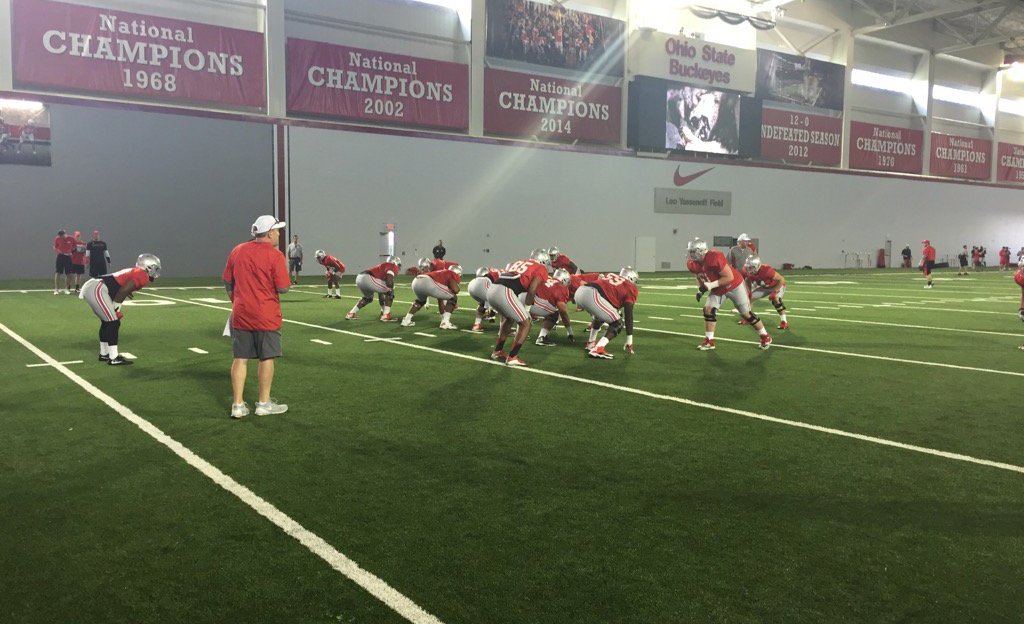 COLUMBUS, Ohio — Even though the Buckeyes had another successful season, it fell short of expectations. Ohio State entered the 2015 season as the defending national champions and as a prohibitive favorite to win their second straight title. It didn't happen, although the Buckeyes did go 12-1 and rolled Notre Dame in the 2016 Fiesta Bowl.

Fast forward to today, and Ohio State is once again the preseason favorite to win the Big Ten.

Here are five things I learned on the third day of Ohio State practice.

1. Mike Weber looks good. The redshirt freshman arrived in Columbus with a fat scrapbook. I was impressed with how he performed in pass-protection, which typically is one of the most difficult things to pick up. He figured to start at some time in 2016 after Ezekiel Elliott bolted for the NFL. With Bri?onte Dunn booted from the club, that time came sooner than most expected. Weber looks the part, showing impressive moves. The guy could be a special back, but he isn?t as thick or strong as Elliott.

2. The d-line will be OK. In fact, it could be very good. The Buckeyes lost a lot up front, including end Joey Bosa and tackle Adolphus Washington. But a bevy of stallions lurks to fill the voids. I love ends Tyquan Lewis and Sam Hubbard, who could be a good one. Jalyn Holmes also looks good coming off the edge. Inside, the Buckeyes can go six deep with Michael Hill, Tracy Sprinkle, Dre?Mont Jones, Jashon Cornell, Robert Landers and Davon Hamilton are among the top talent. And true freshman Nick Bosa looks as good as advertised. The guy has the physique of a senior, but he was limited on this day as he did individual work off by himself most of the time.

3. There is plenty of skill at wideout. I?m sure coaches love the competition for jobs. The guys who catch your eye are Noah Brown, Dontre Wilson, Johnnie Dixon, James Clark, Parris Campbell and Terry McLaurin, who is a burner. Brown looks to be the new No. 1 option after injury ruined his 2015 season. There is a lot of talent and speed at this spot. And, it will sort itself out. Plus, having a veteran QB like J.T. Barrett will hasten the development of this talent. Two wild cards to watch: H-backs Wilson and Curtis Samuel, who could line up out wide or in the backfield. This offense needs to get on track. It averaged 45 points in 2014 but 36 last year.

Urban Meyer has raved about OSU speed. Johnnie Dixon accelerates off the line as well as anyone out here pic.twitter.com/yzcKMNbkUl

4. This team is hungry. Last year was a disappointment for Ohio State, which was the pick by most to win the Big Ten and get back to the playoffs a year after winning the national championship. But, that didn?t happen, as a mishandled quarterback situation proved to be a big undoing for the 2015 Buckeyes. Making last year?s shortcoming all the more vexing is the fact the 2015 squad had 12 NFL draft choices, more than any other school in the nation. This is a focused Buckeye club that wants to make amends for last year.

BTN Camp Tour #Buckeyes Fun team to coach because coaches and players take it personal if they have so much talent and they don?t achieve

5. The o-line should be good even with three starters gone, including tackle Taylor Decker. The unit has two good building blocks in Pat Elflein and Billy Price at right guard. Elflein looks good at center after moving from guard. True freshman-yes, true freshman-Michael Jordan looks like the man at left guard. He began camp with the black stripe removed from his helmet. Freshmen don't get their black stripe removed until they have earned it in the eyes of Urban Meyer. So there is that. Big Jamarco Jones lines up by Jordan at left tackle. The right tackle is Isaiah Prince. Keep an eye on JC Malcolm Pridgeon at guard and tackle. Greg Studrawa was hired to coach the line, with Ed Warinner still the OC but now coaching tight ends.