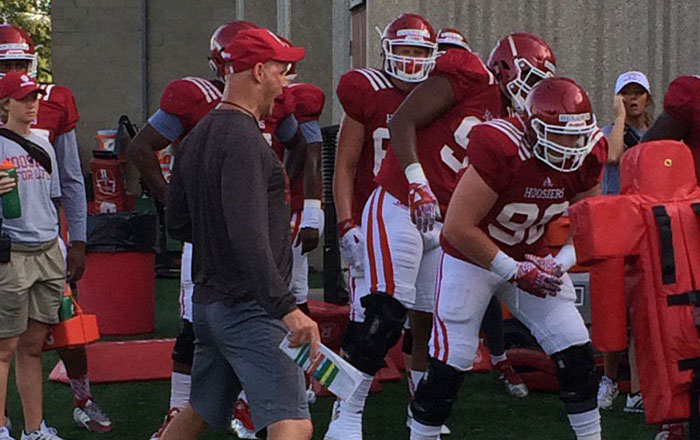 BLOOMINGTON, Ind — The sixth edition of Indiana football under Kevin Wilson teems with potential. Today at practice, the energy level was high for a program looking to go to back-to-back bowls for the first time since 1990-91. If the defense improves and a QB emerges, the Hoosiers could have a special season.

Here are five things I learned in our stop in Bloomington.

1. The offensive line will be good. Yes, the unit lost left tackle Jason Spriggs, who was a second-round pick. Still, the Hoosiers will have another strong front. This is a school that has an underrated reputation for developing lines, which is a specialty of Kevin Wilson, who used to coach the position. Guard Dan Feeney is a great one. He has allowed just one sack in 37 career starts. He is getting some reps at tackle in camp. Interesting. That no doubt would add to his marketability and value at the next level. Could he be a first-round pick? Tackle Dimitric Camiel and guard Jacob Bailey, who each have double-digit starts in their careers, join him. Keep an eye on left tackle Brandon Knight. He could be the next star up front.

2. The defensive line has work to do but will get better. The arrival of line coach Mark Hagen will help. He is a former all-conference linebacker at Indiana who was on Kevin Wilson?s first Hoosier staff. Hagen spent the last three seasons working at Texas A&M. He has a big job to do. Perhaps the biggest of any IU assistant, as the Hoosiers need to get better up front to slow down rushing attacks. Hagen told me after practice that he needs to develop more depth but feels comfortable playing 10 guys. That?s good. Jacob Robinson needs to bring the heat. And Ralph Green and Nate Hoff need to anchor vs. the run. The staff also needs Robert McCray to make a move.

New @HoosierFootball d-line coach Mark Hagen has his work cut out for him. IU must improve vs the run. pic.twitter.com/5Sv1dwwhSL

3. Richard Lagow looked good at times as he battles Zander Diamont for the starting QB job. Lagow ran with the first team today. He looks the part of a Big Ten quarterback at 6-6, 240. He has a strong arm and a good pocket presence. But his passes fluttered at times and his accuracy was a bit spotty. Stay tuned. Diamont is a nifty athlete who can improvise, but is his arm good enough? Whoever wins the job will be surrounded by a wealth of skill-position talent, which should buffer his transition to the lineup as Nate Sudfeld?s replacement.

At 6-6, 240, JC QB Richard Lagow looks the part. But he hasn't won the job yet for @HoosierFootball. pic.twitter.com/MdYlsGa7e5

4. The receiving corps will be one of the best in the Big Ten. Yes, Michigan, Nebraska and Penn State have good wideout units. But the Hoosiers can compete with any of them. Simmie Cobbs, Mitchell Paige and Ricky Jones form a nice triumvirate. Each caught over 50 passes last season. It would be wise to exploit their skills, which makes me think each could have over 60 catches this season. Cobbs is an impressive 6-4 option who is the fastest wideout on the roster. But he needs better consistency.

5. The running game will be just fine without Jordan Howard. The UAB transfer was a first-team All-Big Ten performer a year ago and did a good job taking over for Tevin Coleman. Add it all up, and Indiana?s running game has been great the last two seasons. Now, it?s Devine Redding?s turn. He stepped in well in the games that Howard missed and was also a good change of pace for Howard in games they played together. Redding ran for 1,012 yards last season. Depth also is outstanding, with as many as three or four backs capable of playing.