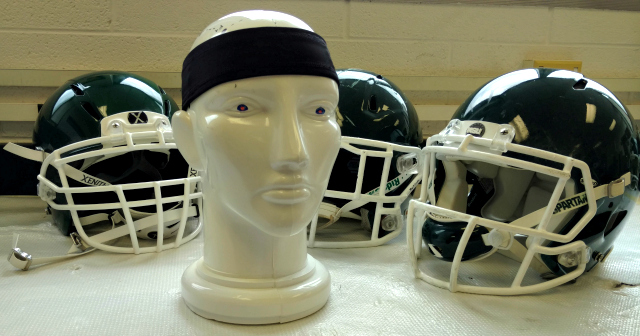 The potential for concussion injuries has risen dramatically in almost every level of athletic competition. According to the American Association of Pediatrics, more than 300,000 sports-related concussions are reported annually in the United States, but a recent review states that the number of injuries could be in the millions.

The disparity in reporting highlights one of the most frustrating aspects of treating concussion-related injuries: Determining when a concussion has occurred and how severe it might be.

A pair of chemistry professors at Michigan State University seem to have an unlikely solution: a headband for athletes to wear during games that assesses how severe a head impact might be.

MSU chemistry professor Gary Blanchard notes the ability to diagnose these injuries isn?t as simple as looking for a broken bone or bruise. ?The coach or parent has no tangible evidence of what might have happened. If we can put some information in these people?s hands to [help] make an informed decision, [then] that?s info that doesn?t exist now.? 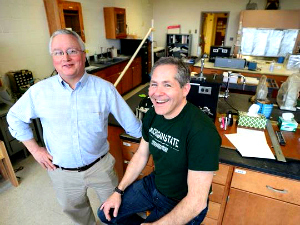 Blanchard initially teamed with chemistry and physics professor Marcos Dantus (both at right) on this project after the National Football League offered up to $10 million to pay for research on preventing and treating concussions. Though that project eventually fizzled out, it resulted in a prototype for a headband (which also can be used as a skullcap) that measures the impact of collisions on the playing field.

If there is potential trauma to the head, a ring will appear on the device. The harder the impact, the more rings displayed. For serious impacts, stars will start to appear as well. Coaches or physicians can look at the headband and immediately see if the collision merits further attention.

?We wanted something that?s so simple and intuitive to read that anybody can just look at it and say 'You?re fine' or 'Start sitting on the bench and do an evaluation protocol,' Dantus said.

The doctors caution their device isn?t the end-all-be-all for concussion diagnosis. In fact, it?s just a starting point for team officials to determine how to proceed.

?Our sensors are not diagnostic of concussions, we?re not trying to do that at all,? says Blanchard. ?But we can see if there has been an impact and can go from there. We want to have a valuable data point that can help in the clinical evaluation.? 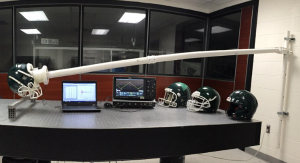 The devices went through a rigorous testing process that included more than 200 prototypes on test dummies, one of which broke from the strain. ?We had to go back to Physics 101 and think of the entire process of how an athlete might be running [including], how deceleration is going to happen and ? how the brain inside the cranium [and] inside of a helmet will be hit.?

The professors then conducted trials with the Spartans? men?s and women?s soccer programs as well as the football team?s spring practices.

?The players have been enormously helpful,? Blanchard said. ?Not only did they do trials for this stuff, many were actually eager to do this. The advice we got from players about what would work and what doesn?t has been really great.?

After working out as many of the kinks as possible, the product will be available later this month, both for individual athletes and team purchases at ROSHsensors.com. The professors estimate they will cost around $40 per device.

?The physics of it is very simple, but getting people to wear it under real-life conditions is a challenge,? Blanchard said. ?A headband you get in a commercial shop is around $20. We think [ours] have added value but we want to bring it into a price point that?s affordable to a lot of people.?

He said the project could never have gone forward without assistance from the university. They sought out help from MSU trainer Sally Nogle as well as neurology professor David Kaufman.

?MSU has a real can-do attitude,? Blanchard said. ?If you talk to people outside of their discipline, their first questions is going to be, ?How can I help you?? It?s been an enormously satisfying thing to do to create some technology that can really help people.?