Technology developed by Wisconsin allows the blind to see through the tongue: BTN LiveBIG 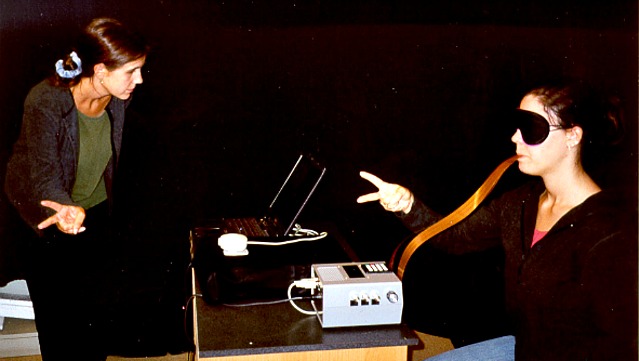 There?s the saying ?it looks so good you can taste it,? but what if it was the opposite way around? Believe it or not, that's imminently possible, and it's all thanks to technology developed at the University of Wisconsin roughly two decades ago.

The BrainPort V100 system, now FDA approved and available for purchase, allows the visually impaired to receive visual information through the tongue.

How it works: a video camera is positioned between the eyes and connected to a processor that feeds electrical pulses to a plate on the tongue. Sensory nerves pick up the stimuli and the brain interprets the incoming sensations, making a picture of the world.

While the BrainPort V100 is a new system, sold privately through Wicab, Inc., the technology was developed roughly two decades ago at Wisconsin?s Tactile Communication and Neurorehabilitation Laboratory (TCNL) in the university?s Department of Kinesiology. Kurt Kaczmarek, one of the lab?s three project directors, was part of the initial development of this technology in the ?90s.

?It spun out of a challenge that Paul Bach-y-Rita, who?s our lab founder, made to myself and one of my colleagues Mitchell Tyler ? and what Paul proposed is that the tongue would be a good source to display information? Kaczmarek says. ?Paul reasoned that the brain has a big chunk of real estate devoted to processing information from the tongue, so there?s about as much brain that processes tongue information as processes information from the hands.?

Kaczmarek and his colleagues conducted their first experiment in 1998, but at the time their technology was designed for the fingertip. In 1999, Kaczmarek designed the first tongue display unit. Now more than 15 years later, Kaczmarek is pleased to see the technology make it to market, though he hasn?t worked with it directly for years.

?It?s kind of exciting for me, to see it finally achieve fruition,? he explains. ?It?s a long, long time, but when you?re trying to create something that?s never been done before - that doesn?t have a precedence in the marketplace - that?s kind of what happens. You make a lot of wrong turns along the way. If you?re lucky, hopefully you?ll get there.?

TCNL, which is directed by Kaczmarek, Mitchell Tyler and Yuri Danilov, has shifted the majority of its research energy toward the Portable Neuromodulation Stimulator (PoNS), which also stimulates the tongue, but acts as a very different kind of rehabilitation tool from the BrainPort.

Kaczmarek describes the technology as ?just pulses.? He and his lab colleagues hope to discover if, when combined with physical therapy, this technology can improve the efficacy of the therapy for individuals with traumatic brain injury and other neurological disorders.

[btn-post-package]?We?re trying not to get too caught up into the particular conditions,? Kaczmarek says. ?We?re looking at it from the point of view that, even in a damaged state, the brain is capable of recovering function - that?s where physical and occupational therapy come in - and how can we maximize or optimize that process, both through choice of therapy activity and combination with stimulation of the sensory nerve.?

In the future, Kaczmarek hopes the technology can one day be applied to enhancing brain function and not just restoring it.

Though their team is small, Kaczmarek says that being a part of the University of Wisconsin is a great benefit to his team?s research.

?There?s a tremendous range of resources and a lot of incredibly bright people here,? he says.