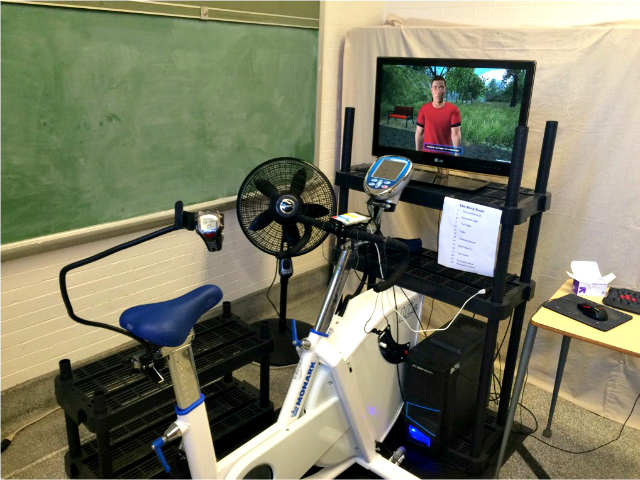 Many individuals strive to become better, faster, or stronger in their sport of choice. New research at Michigan State University is taking a unique approach to help athletes accomplish their goals while also attaining a better understanding of what makes them achievable.

Dr. Deborah L. Feltz, a university distinguished professor for MSU?s Department of Kinesiology, is utilizing exercise video games to study how the presence of partners and teamwork can impact athletic performance.

Feltz and her team at the school?s Exergames Research Lab, named for fitness games that require physical exertion to play them. Using avatars and virtually present partners – think World of Warcraft here – their studies analyze what motivates someone to ultimately perform at a higher level.

?We based this on the Köhler effect, which is a group dynamics principle that basically says if I partner up with you, whether I?m real or not and whether you are better than me or not, and whether you are real or not, you?ll be more motivating for me because I socially compare myself,? explains Feltz. ?I can also raise my goals by thinking, ?If you can do it, I can do this, too.??

?The other aspect is what we call an indispensability motive. We set this up such that we are a team and the person who quits first is what our score is based on,? continues Feltz.

For the tests, individuals rode on stationary bikes programmed so athletes would perform at a high percentage of their max heart, typically around 75 percent. They rode for, at most, an hour. While a few participants made it the entire hour, most quit before the hour was up.

Two people appear on a screen: one, the individual?s avatar self; the other, a partner. Findings thus far have shown that women were motivated by viewing their own avatar as well as being part of a team and not letting their partner down. Men, on the other hand, needed something extra to get them motivated. Men?s competitive drive, and corresponding performance enhancement, increased as they received confirmation they were working hard, particularly in comparison to another person who was fatigued.

?In team cycling, the team?s score is based on the last guy on your team to cross the finish line,? notes Feltz. ?So if you?re the last one, the weakest cyclist, it?s really dependent on you. You are indispensable to your team performance. You have to work your butt off and work harder than the first guy. That?s what this is based on, that sense of indispensability and not wanting to be the weakest link.?

It?s an effort that Feltz acknowledges is in its early stages, but the applications of her work are endless. The technology could be applied to rehabilitation settings and physical therapy, first and foremost. But so many other potential uses exist.

?Individuals who have social physique anxiety about going to a public gym and exercising could do it within their own home,? Feltz states. ?Those who have schedules that make it really difficult to fit workouts in could fit them in on their own time. Women who are of particular cultures or faith where exercising with a member of the opposite sex is not possible to do could use some of the dynamic group principles that some of the other standardized workouts - think those old Jane Fonda tapes - don?t have.

?And if we can program the partner to be smarter, then it could also change,? adds Feltz. ?We have some of that built in now where the partner changes as you change. Those kinds of parameters can be set whereas Jane Fonda can?t. The videotape is the videotape and it?s the same thing over and over again.?

While cycling is an obvious comparison for now, she believes the concepts they are dealing with can apply to any effort-based activity.

Though MSU student athletes have not been used by Feltz and her team yet, it?s possible that someday they may benefit from the findings. Just as the study, in part, focuses on teamwork, Feltz is appreciative of the effort by so many in East Lansing.

?This, of course, has to be an inter-disciplinary kind of team to do this work,? notes Feltz. ?It?s team science and within my own department, we?ve had exercise physiologists on the team and we?ve had people from the Department of Media and Information. They helped us design the game and are one of the top programs in the country in this area."

?It?s definitely a team approach and there aren?t very many places in the country where work could be done with this kind of collaboration.?