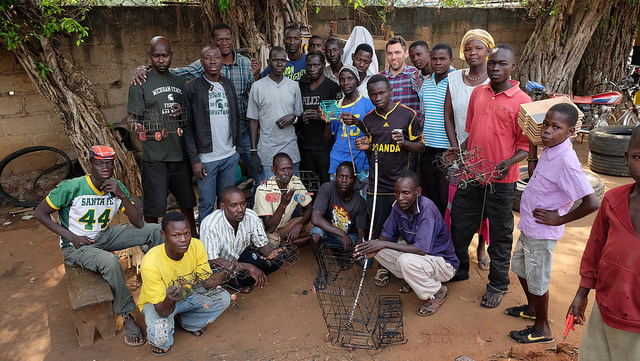 But one aspect of its work sounds like a joke in search of a punchline: How do you turn a poacher into an artist?

The answer may be in a RECaP program called Snares to Wares, which turns the wire traps that threaten East African wildlife into toys and works of art to be sold around the world.

?Over the last 15 years we?ve had really swift population declines of species of immense conservation importance,? says Robert Montgomery, director of RECaP Laboratory. ?In the East African region, we?ve lost 40% of giraffes, 50% of lions and 60% of elephants.?

Montgomery started the laboratory in January of 2014 with a two-tiered goal: understanding how carnivores and their prey affected, and were influenced by, their physical environment and developing a program that was driven by diverse student populations and collaboration.

Snares to Wares addresses a problem of poaching in the region. The poachers? traps are created from wires inside discarded radial tires found throughout the East African landscape.

While RECaP?s expertise lies in the effects of animals? interactions with their environment, this problem requires a human-to-human intervention. The people recruited into poaching are boys as young as twelve, a crucial age that determines whether they will receive higher education and training or explore other less-desirable options.

Preventing young boys from becoming poachers is a job for a person who understands their culture, someone who isn?t often reflected in the broader field of conservation.

?Wildlife sciences tend to be rather homogeneous,? says Montgomery. They tend to be people who look a lot like me: white males. We must have diversity in the leadership so we can manage these resources for the betterment of society.?

Mudumba has been part of RECaP?s team since August of 2015 after earning a bachelor?s degree from Makerere University in Uganda and completing a postgraduate program at University of Oxford.

Unlike Montgomery, who is based in East Lansing, Mudumba?s work has him in and near Murchison Falls National Park in Pakwach, Uganda.

Much like programs based in a social work philosophy, Snares to Wares uses strengths already inherent in the local population. This approach helped Mudumba improve on an already-existing solution for preventing the wires of discarded tires from becoming poachers? traps.

?The human communities living on the periphery of Murchison Falls National Park were already manipulating disused wire into toys for sale to children in the village,? says Mudumba. ?Our innovation was to present employment opportunities to youth vulnerable to the poaching industry and provide training for the conversion of wire into representations of the animals that can be maimed by wire snares.?

A crucial part of this plan is Mudumba himself, who must look for boys targeted by the poachers and persuade them to consider an alternate vocation.

?In Pakwach, I have won the trust of the local boys who can relate with me easily because I am very sensitive to – and integrated among – the local culture and traditions,? says Mudumba. ?I have also provided short term employment to some of these youth so that [instead of] putting snares out into the National Park, they worked for me to find and remove snares from the landscape.?

Re-purposing the wire and preventing the animals from getting caught in the traps provides a safer vocation for youth while also reducing the harm to local animal populations.

Meanwhile, back in Michigan, Montgomery is coordinating with MSU?s state-of-the-art School of Packaging to ship and sell the wares created by Pakwach?s boys in shops within East Africa, Michigan and other points around the world.

"Michigan State University is known for encouraging collaboration between departments,? says Susan Selke, director of MSU?s School of Packaging. ?It?s a recognition that tough, significant problems require input from people with a variety of backgrounds and disciplinary expertise. If you look at [our] mission, enhancing the quality of life for people not only in Michigan but around the world is a very important value."

Montgomery and his team know that however good MSU?s RECaP program may be, a better solution is to have a university program much closer to the problem.

?What we need to do is to develop a center of excellence in wildlife conservation in the East African region,? says Montgomery. ?For the last year, I?ve been leading efforts along with colleagues here to work toward that effort at Makerere University in Uganda. Within two years, they?ll be able to accept the first cohort of Ph.D students into that program via a coordinated, first-of-its-kind collaboration between Michigan State University and Makerere.?

So whether it?s social work-inspired vocational training with the local community, field research alongside threatened animal populations or training the science?s future leaders, the holistic approach of Michigan State?s RECaP may reimagine wildlife conservation for years to come.

And that?s no joke.