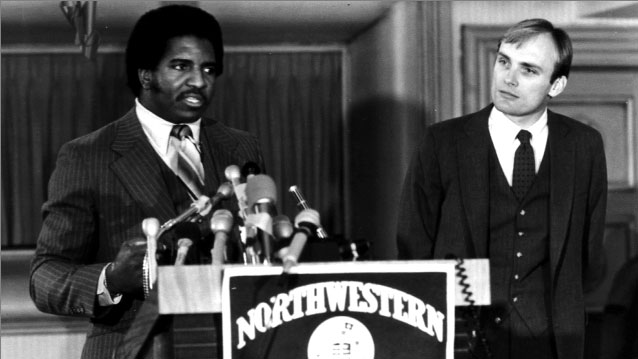 Long before his infamous ?They are what we thought they were? rant in 2006 as coach of the Arizona Cardinals following an epic press conference meltdown, Dennis Green cut his teeth as a player and coach in the Big Ten. Now, he has passed away at age 67.

A native of Harrisburg, Pa., Green matriculated to Iowa, where he was a diminutive halfback under Ray Nagel from 1968-70 who ran for 699 yards and caught 24 passes while showing a love and thirst for the game. And he channeled that love and thirst into a successful coaching career that traced its roots to the Big Ten and impacted many people along the way.

The 2013 Black History month video profile up above captures some really nice tales from Green himself about many of those days. It's worth a watch.

After a year as an assistant at Dayton, Green returned to his alma mater in 1974 as running backs coach under Bob Commings. From there, Green?s career continued to ascend quickly to the point where he became head coach of Northwestern in 1981 at age 32.

At the time of his appointment, Green was just the second African-American head coach in the Division I annals and the first in the Big Ten

Green inherited a dire situation from Rick Venturi, as NU had gone 1-31-1- in its previous 33 games. But Green was undaunted and felt he could make a difference. And, he did, helping the program become better while honing his skills as a coach who was a smart tactician and knew how to relate with players and motivate.

After a stint with the 49ers as assistant, where he learned under Bill Walsh, Green became head coach at Stanford in 1989, going 16-18 overall and 13-11 in the Pac-10 in three seasons. Green never coached in college again, getting an NFL head coaching job with the Vikings in 1992, where he worked until 2001 and had his greatest success. The Vikings made eight playoff appearances under Green, reaching the NFC title game in 1998 and 2000. His best season was 1998, when he led the Vikings to a 15-1 mark before stunningly losing at home to the Falcons in the NFC title game.

On DennisGreen.com, it?s noted that the underlying theme of Green's teams was perseverance, no excuses and a drive to win. This is a guy who lost his parents at a young age but still soldiered on. He didn?t know the word "quit."

Green's motto was: "Plan your work and work your plan." He explained how to do so with what he called ?The 3 Ds,? which were desire (goals), dedication (work ethic to achieve the goals), and determination (perseverance). In his autobiography, No Room For Crybabies, he told his inspirational life story, and provided the blue print for and explanation of how he overcame bigotry and discrimination to succeed in life and to climb to the top of his profession.

Green?s impact went well beyond the football field. He was a special person who touched a lot of lives. And he will be missed.

Here are a few reactions rolling in from across social media.

Dennis Green was B1G Coach of Yr in '82 after winning 3 gms. And he deserved it. Amazing how far NU has come – and he got ball rolling

Our entire football family is grateful for Coach Green's impact! Thoughts and prayers are with his family today. pic.twitter.com/uK5gKSJtF4

Sad, stunning news about death of Dennis Green, Big Ten's first African-American football coach at Northwestern who was fun to cover in NFL.

When Dennis Green took over at Northwestern, they had gone *1-31-1* under the previous coach. He went 10-45, which is sort of amazing

RIP, Dennis Green, one of the trailblazers for minority coaches in the NFL, and a very good coach. Sad news.