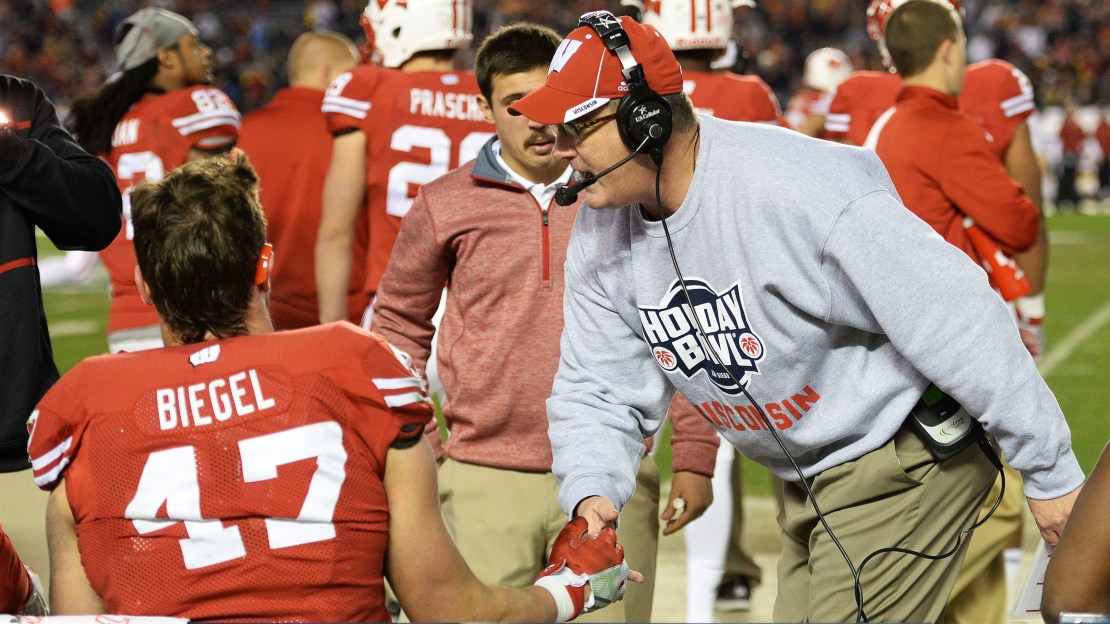 Talented, quick, deep ? those are just three words that aptly describe the linebacking corps at Wisconsin, which tops my ranking of Big Ten West linebackers. But the LBs will have to adjust to a new coordinator. What impact will that have?

Here's my ranking of the Big Ten West linebacker units.

1. Wisconsin. Senior Vince Biegel and sophomore T.J. Edwards are the bellwethers of this strong unit. Biegel tallied 14 TFLs in 2015 and is the leader of the defense at an OLB slot. Edwards paced the squad with 84 tackles as a redshirt freshman last year. How good is he gonna be? Junior T.J. Watt-the younger brother of you-know-who-is a former tight end who will start on the outside. Sophomore Chris Orr and junior Jack Cichy-the bowl game star–will battle to start inside with Edwards in this 3-4 scheme that will miss Joe Schobert as the defense adjusts to new coordinator Justin Wilcox.

2. Nebraska. This group looks good with starters back in senior Josh Banderas and rising sophomore star Dedrick Young, who made 61 stops as a true freshman in 2015. Senior Michael Rose-Ivy is a leader who has struggled to stay healthy. Junior Chris Weber also will be a key contributor. Injuries impacted this group last season. With good health, the Huskers could be stout here.

3. Iowa. Junior Josey Jewell will be one of the league?s top linebackers. The guy loves to hit and is a throwback, ranking No. 2 in the Big Ten in tackles last year with 126. He also was the first sophomore under Kirk Ferentz to be named a captain. Fellow junior Ben Niemann is an underrated athlete who just makes plays but is coming off an ankle injury. Keep an eye on sophomore Aaron Mends. Junior Bo Bower and sophomore Jack Hockaday bolster depth.

4. Northwestern. Is there a better linebacker in the Big Ten than junior Anthony Walker? He made 20.5 TFLs last year, when he was first-team All-Big Ten. Senior Jaylen Prater is back to start on the outside but is coming off a knee injury. Sophomore Nate Hall looks primed to take the one open job in this unit. Senior Joseph Jones and sophomores Tommy Vitale and Cameron Querio provide depth for a group that lost Drew Smith.

5. Minnesota. This could be the strongest position on Minnesota?s defense, even with the loss of De?Vondre Campbell. The Gophers are set at two spots with junior Cody Poock and senior Jack Lynn. Poock is a tackling machine who led the squad with 99 stops in 2015. Lynn paced the team with 11 TFLs. Junior Jonathan Celestin is tabbed to take Campbell?s outside spot. His nickname is ?Thumper.? That?s all you need to know. Senior Nick Rallis is a savvy backup. Sophomore Julian Huff will help, too.

6. Purdue. This area has lagged for years but could be solid in 2016. Everything begins with junior Ja?Whaun Bentley, but he?s coming off a knee injury. He will be flanked by returning starters in junior Danny Ezechukwu and senior Jimmy Herman. Ezechukwu is an underrated athlete; Herman is a try-hard guy. Senior Andy James Garcia can start if needed. Sophomore Markus Bailey is coming off injury but has promise.

7. Illinois. Lots of worries, as experience and depth are lacking, especially after two-year starter T.J. Neal opted to transfer. He was the team?s No. 2 tackler in 2015 and his loss means the Fighting Illini will be without six of their top seven tacklers from last season with steady Mason Monheim also gone. Want more? Two backup linebackers also have transferred. Senior Hardy Nickerson is a grad transfer from Cal who will need to save the day; he?s the son of DC Hardy Nickerson Sr. Junior James Crawford and senior Mike Svetina will flank Nickerson. Crawford is fast but lacks bulk; Svetina can?t stay healthy.