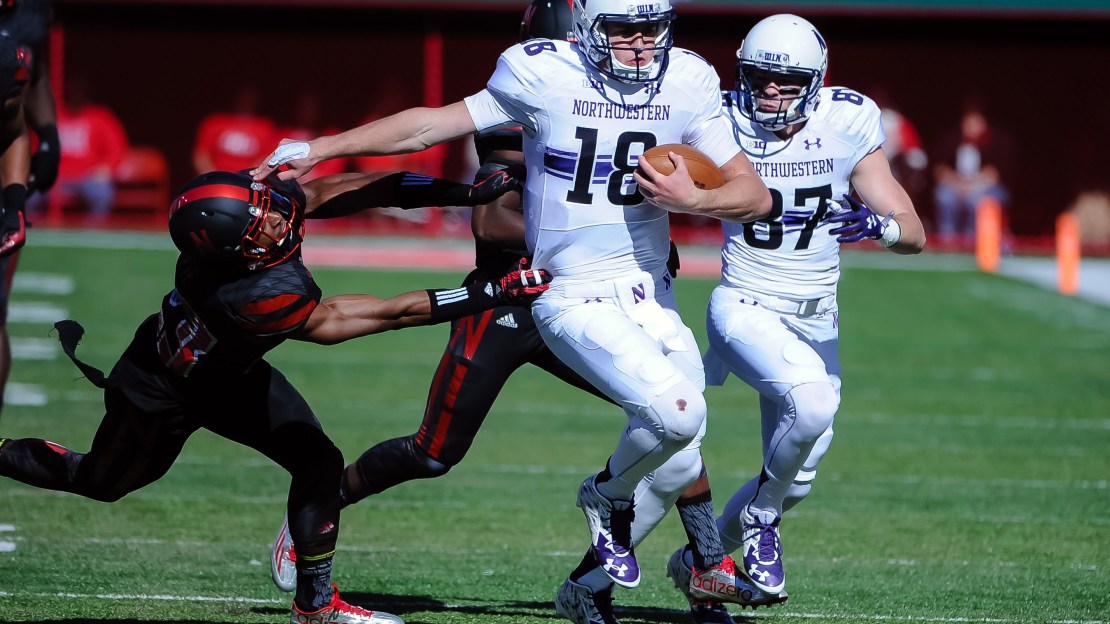 In case you missed this, and I?m sure you did, Purdue DT Ra?Zahn Howard is in the upcoming NFL supplemental draft, according to reports. Yes, Howard was an underachiever, but the Boilermakers sure could have used his run-stuffing skills and size on the interior. But he didn?t take care of academics and was suspended for the spring. Now, he?s gone for good.

The Star Tribune says the 6-7, 345-pound Greene, who hails from Marietta, Georgia, will transfer to Minnesota from Coffeyville Community College in Kansas. He'll start classes at Minnesota in August and will be eligible to play this fall with three years of eligibility remaining.

InsideNU.com has a good summer guide to the Wildcats football squad. Check out the Wildcats' quarterbacks.

Clayton Thorson is back to start again but he needs to show improvement after a largely pedestrian freshman season. His accuracy and decision making need to improve. How is this for pressure: If Thorson fails to improve, NU probably will struggle. Matt Alviti is waiting in the wings but he needs to improve as a passer.

Nice story on Michigan d-lineman Ryan Glasgow, who is ready to hit someone for a line that may be the nation?s best.

How good is Glasgow? During the first nine games of last season, Michigan allowed 725 rushing yards. With Glasgow (and Bryan Mone) shelved for the final four, the Wolverines allowed 864 rushing yards.

"There might be some rust with technique and stuff. But (I'd be healthy and ready)," Glasgow told Mlive.com. "Being out on the field is amazing. I definitely took it for granted before and I never will ever again now. That injury definitely sobers you up to the fact that football does have an end date. Which is unfortunate.

"But it makes you appreciate the game."

Pennlive.com looks at how Penn State alums are doing in the NFL.

So far, so good, for Michigan State?s basketball offseason, according to Tom Izzo.

There has been one injury, to rising sophomore guard Matt McQuaid, who Izzo said suffered a stress fracture in his pelvic area. Izzo said McQuaid resumed working out last week after missing most of the summer and that his recovery has been "really positive."

Congrats to Iowa?s Peter Jok for getting an invite to the prestigious Nike Basketball Academy, which runs July 24-28 in Los Angeles and features NBA stars LeBron James, Kevin Durant and Anthony Davis.

HawkCentral.com says the annual event since 2007 includes the top 20 to 30 returning college stars, and for the third straight year includes a Hawkeye. Aaron White (2014) and Jarrod Uthoff (2015) were previous participants, and both parlayed the skills camp into first-team all-Big Ten seasons.

Sounds like White has a ?helicopter? parent. And it sounds like the kid may be a bit delusional when it comes to assessing his skills and pro potential. And how will NBA teams feel about White running out on Nebraska?

Who will be the next Buckeye picked in the NBA draft? It could be Keita Bates-Diop, who did not test the waters this year.

"You can get feedback other ways, and the perception of it, you declare for the draft, you're thinking relatively individually," Bates-Diop said in April to Cleveland.com. "That's the way I looked at it. I didn't want to do all that."