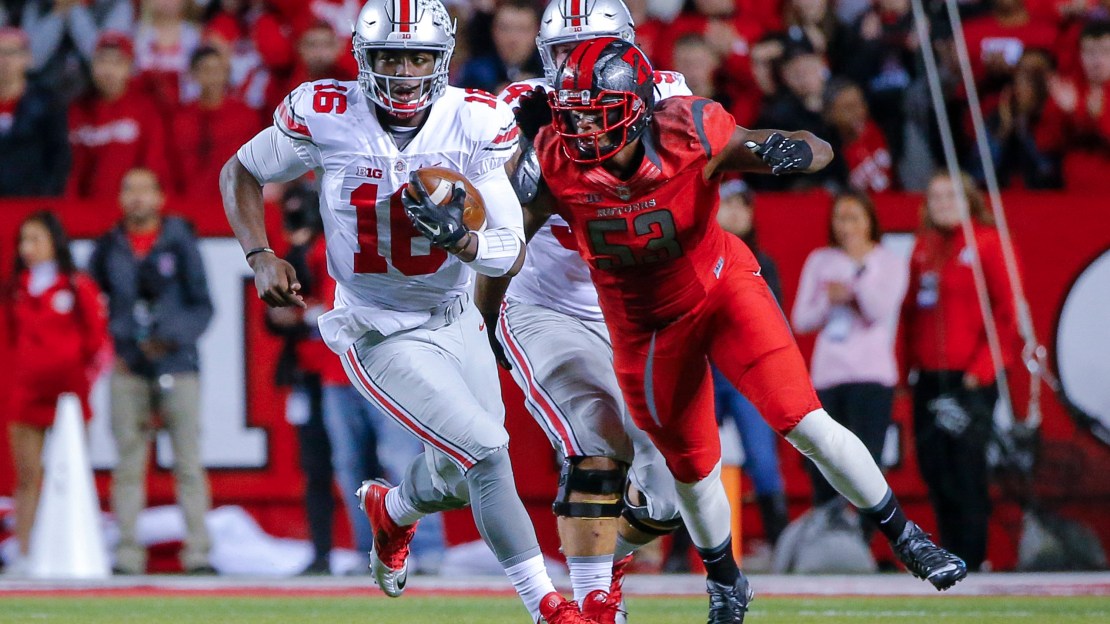 The personnel losses at Ohio State were significant after 2015. Heading the list of key departures: running back Ezekiel Elliott. How will the Buckeyes replace him?

Michigan State can sympathize, as it has lost all-time great quarterback Connor Cook. Relax. Each school appears to have answers in its backfield.

Here is a ranking of the Big Ten East offensive backfields.

1. Ohio State. It was a huge loss with RB Ezekiel Elliott declaring for the draft and going fourth overall. Who will tote the rock? Keep an eye on redshirt freshman Mike Weber, who looks like the next star. Senior Bri?onte Dunn is a physical option. The Buckeyes have a huge asset in junior J.T. Barrett, perhaps the best quarterback in the Big Ten and a legit Heisman contender. He was derailed last year by a silly battle with Cardale Jones that ultimately proved ruinous to the season. Barrett?s presence alone makes this the No. 1 backfield in the East. He?s that good.

2. Michigan State. The loss of QB Connor Cook leaves a huge void. He was an all-time great. Senior Tyler O?Connor looks like the heir apparent. He impressed by starting and winning at Ohio State last season. Sophomore LJ Scott is a battering ram at running back who has been compared to Le?Veon Bell. Whoa. Sophomore Madre London offers great depth. Junior Gerald Holmes is another good option.

3. Michigan. Who will be the QB with Jake Rudock gone? Junior Wilton Speight looked like the leader exiting spring drills and impressed in leading the Wolverines to victory at Minnesota in 2015, but keep an eye on junior Houston transfer John O?Korn. Senior lefty Shane Morris also is in the mix. Senior running back De?Veon Smith looks primed for a big senior season. Senior Ty Isaac is slimmed down and appears ready to fulfill the hype he brought to Ann Arbor after transferring from USC.

4. Penn State. Lots of newness, as Joe Moorhead was brought in from Fordham to run the offense. Look for the quarterback to be more involved as a runner. And that new signal-caller figures to be sophomore Trace McSorley, who looked good in the bowl game after Christian Hackenberg got hurt. Redshirt freshman Tommy Stevens will push for the job. Saquon Barkley is primed to become one of the nation?s top backs after a sensational freshman season. The running back riches continue with sophomore Malik Allen, redshirt freshman Andre Robinson and incoming freshman Miles Sanders.

5. Indiana. How do you replace QB Nate Sudfeld? It won?t be easy. JC transfer Richard Lagow is the favorite. He began his career at Oklahoma State and can spin it. Sophomore Danny Cameron and junior Zander Diamont are other competitors. RB Jordan Howard is off after an injury-plague senior year following his transfer from UAB. No worries. Junior Devine Redding is back after rambling for 1,012 yards.

6. Rutgers. The Scarlet Knights have a good 1-2 punch at running back in juniors Josh Hicks and Robert Martin. But who will be the triggerman for Rutgers? new hyper-speed offense of coordinator Drew Mehringer? Junior Chris Laviano is the returning starter and is competing with junior Hayden Rettig, who began his career at LSU. Laviano seems a better fit. The attack is changing from a pro-style, two-back scheme to a spread set that wants a mobile quarterback.

7. Maryland. New coordinator Walt Bell has installed a quick-paced attack that wants to get the ball off quickly. Who will be QB? Stay tuned. Senior Perry Hills, a better runner than passer, is battling senior Caleb Rowe, a better passer than runner. Touted incoming freshman Tyrrell Pigrome may be a factor. Senior Wes Brown is a proven back. Sophomore Ty Johnson is another option.