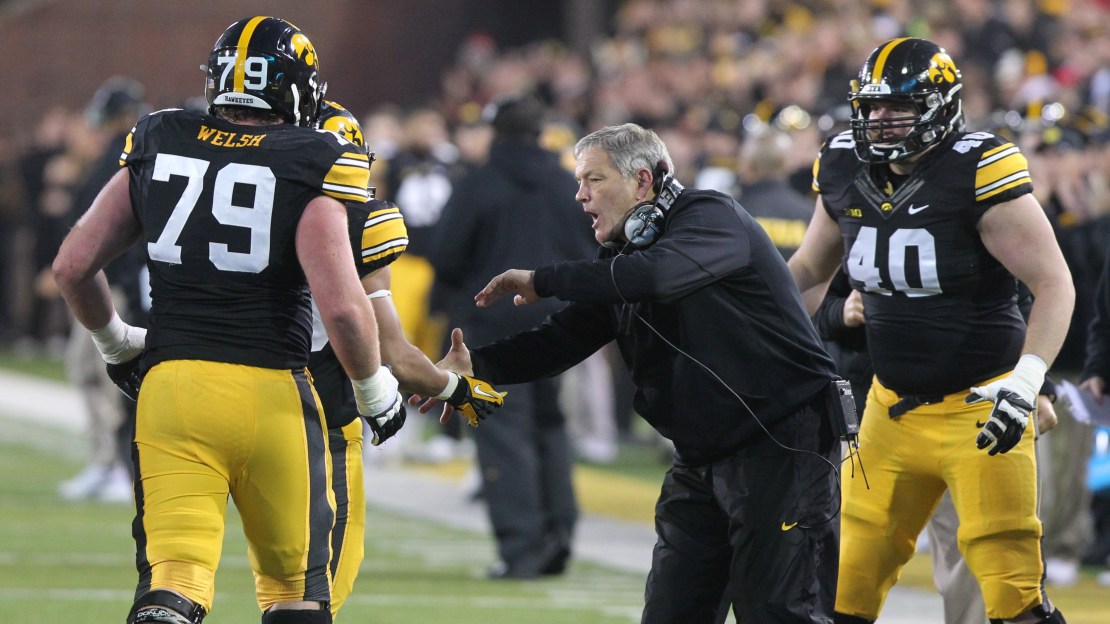 I continue my look at Big Ten units with a ranking of the offensive lines in the Big Ten West.

Once again, Iowa looks to have a stout front. But keep an eye on Wisconsin, whose front looks to be back up to its usual stellar form.

1. Iowa. Three starters are back from a front that helped the Hawkeyes rank No. 5 in the Big Ten in rushing last year (181.7 ypg). Senior left tackle Cole Colston is a former walk-on. He?ll line up by another ex-walk-on in Boone Myers, who has moved from tackle to left guard. Junior Sean Welsh is a former guard who may move center. Some feel he may be the best blocker on this unit. Sophomore right guard James Daniels looks like a future star but is coming off a knee injury. Junior right tackle Ike Boettger excels as a run blocker. Intense line coach Brian Ferentz also maximizes this group?s ability.

2. Wisconsin. This unit lacked depth last year. But it looks like a strong suit this season. The interior has all three starters back. Senior Dan Voltz has moved from center to left guard. Sophomore Michael Dieter is the center. Sophomore right guard Beau Benzschawel is a former tackle. The tackles are new. Junior Ryan Ramczyk is penciled in at left tackle. He is a transfer from UW-Stevens Point. Sophomore Jacob Maxwell is on the right side. Joe Rudolph is one of the best line coaches.

3. Nebraska. With the staff wanting to run more, it?s vital for this group to step up. Rising sophomore star Nick Gates has moved to left tackle with Alex Lewis gone. Gates may be special. Monstrous junior David Knevel is on the right side. Sophomores Jerald Foster (left) and Tanner Farmer (right) are slotted at the guard spots. Farmer is a classic tough guy. Senior Dylan Utter has moved from left guard to center.

4. Northwestern. This group has gotten better in recent years. And, it should be good in 2016. Both tackles are back, with sophomore Blake Hance on the left and senior Eric Olson on the right. Keep an eye on sophomore Ben Oxley to make a run at Olson. Senior left guard Ian Park also is back. The staff needs junior Brad North to step up at center. Senior right guard Connor Mahoney is a former defensive tackle who plays with an edge.

5. Minnesota. This group needed an edge. It may have gotten it with JCs Vincent Calhoun (right guard) and Garrison Wright (left tackle). They look good for new line coach Bart Miller. Junior left guard Connor Mayes is a classic mauler. Giant Jonah Pirsig is back to start at right tackle as a senior. He made strides in the spring. Sophomore center Tyler Moore is an emerging talent who was forced into action last year as a freshman.

6. Illinois. After being a weakness for a number of years, this group finally may be turning the corner as it is led by Luke Butkus. Senior left tackle Austin Schmidt and junior right tackle Christian DiLauro are solid flanks for an offense that was last in the Big Ten in rushing in 2015 (129.3 ypg) with a league-low 13 rushing TDs. Senior center Joe Spencer is a focal point who makes the calls. The guards are new. Junior Zach Heath is on the left, while sophomore Nick Allegretti is on the right. He could be special.

7. Purdue. This group hasn?t gotten a push in recent years and is a big concern after the Boilermakers ranked No. 13 in the Big Ten in rushing (131.3 ypg). Depth is a huge worry. Senior left guard Jason King and senior right guard Jordan Roos are the lone starters back and look solid. After that? Sophomore Kirk Barron has potential at center. Redshirt freshman Matt McCann looks to build on a strong spring at right tackle, beating out incumbent Cameron Cermin. Sophomore Martesse Patterson is the left tackle. Maybe new line coach Darrell Funk will make this group better.