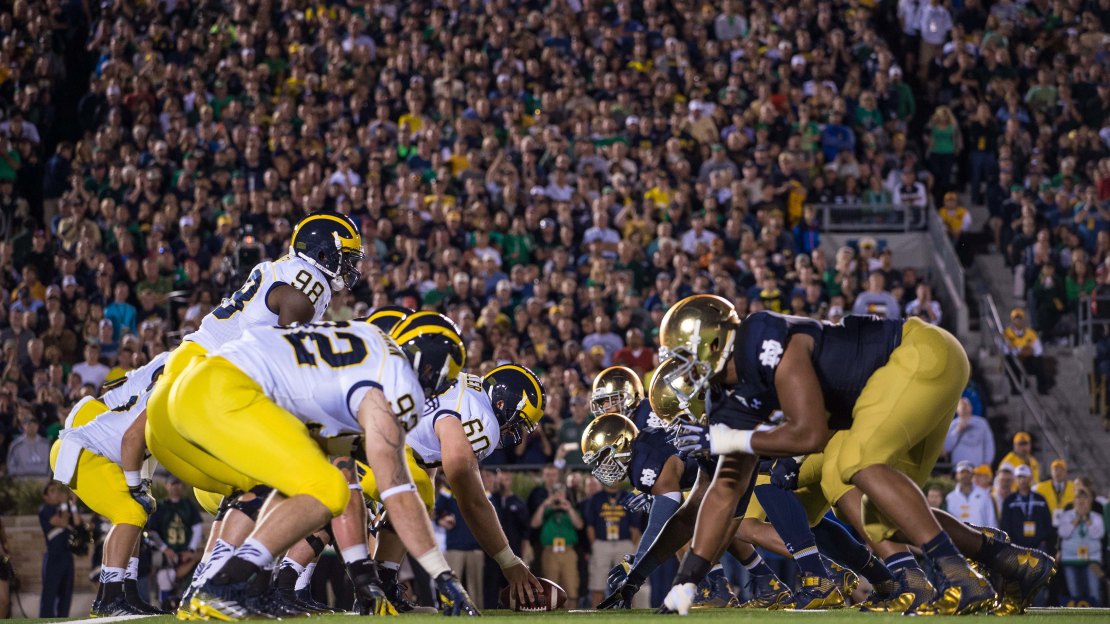 Ask any coach: Football is won and lost in the trenches. If a team can?t block, its offense has little chance to gain traction. If that's the case, Michigan fans should be happy. After years of struggles, the Wolverine front looks very good as Jim Harbaugh begins Year Two in Ann Arbor. Imagine what this line will look like once it is fortified with Harbaugh recruits.

Here is a ranking of the offensive lines in the Big Ten East.

1. Michigan. This unit has been a concern for several seasons. But look at it now! The big boys made strides in 2015 and look primed to resemble some of the better Wolverine fronts in years past. Replacing center Graham Glasgow will be tough, as he was the lynchpin of the 2015 front. Who steps in? Uber-talented Mason Cole, who is moving from left tackle, will snap. Interesting. Rising sophomore Grant Newsome will take over left tackle. He may be special. The guard slots will be solid with seniors Ben Braden (left) and Kyle Kalis (right) returning starters. Senior right tackle Erik Magnuson is considered to be the second-best lineman after Cole. Line coach Tim Drevno does a great job.

2. Ohio State. This group has been terrific of late but must replace three starters. But line coach Ed Warinner is one of the best in the biz. Senior center Pat Elflein is back to anchor the group and is flanked by a fellow returning starter in junior left guard Billy Price. Elflein could have gone pro. Good thing he is back as he moves from guard to the pivot. Watch the tackle spots. Junior Jamarco Jones is penciled in at left tackle with first-round pick Taylor Decker gone. Sophomore Isaiah Prince is at right tackle. He was one of just four true freshmen to play in 2015 for OSU. Right guard could be redshirt freshman Matthew Burrell or Michael Jordan, a true freshman.

3. Indiana. There is work to do with three starters gone from one of the more underrated fronts in the Big Ten that helped IU rank No. 2 in rushing (210.5 ypg) last year. The entire left side of the front has departed, with stud tackle Jason Spriggs the biggest loss. There also will be a new center. Senior right guard Dan Feeney is among the best in the nation. He?s a tough, physical mauler. Senior right tackle Dimitric Camiel is a cut above. The staff is high on sophomore left tackle Brandon Knight, who could be a future star as he takes over Spriggs? spot.

4. Michigan State. Lots of work to do, with three starters gone. The lone starters back are junior center Brian Allen, who moves from guard to replace brother Jack, and senior right tackle Kodi Kieler. Keep an eye on junior left tackle Dennis Finley, who replaces first-round pick Jack Conklin. Finley is coming off a broken leg. Sophomore David Beedle and senior Benny McGowan are options at left guard. Senior Brandon Clemons is first up at right guard. Miguel Machado could factor in at guard or tackle. Line coach Mark Staten is one of the best.

5. Penn State. This group remains a work in progress. Maybe the arrival of new line coach Matt Limegrover will help. Four starters are back. Junior left tackle Andrew Nelson is the anchor who is in his third season as a starter. The staff will try former JC Paris Palmer at right tackle after he struggled on the left side last year. Senior Brian Gala slides over from guard to play center. Redshirt freshman Ryan Bates looks to have a bright future at left guard, with junior Brendan Mahon at right guard. This unit must improve after PSU ranked No. 12 in the Big Ten in rushing (133.9 ypg).

6. Rutgers. The interior has three starters back: junior left guard Dorian Miller; senior center Derrick Nelson; senior right guard Chris Muller, who will be pushed by sophomore Marcus Applefield. The tackles? Senior J.J. Denman returns on the right side, while Tariq Cole is slotted for the left side. Zack Heeman could be a factor for a unit that must adapt to a new, quick-paced offense.

7. Maryland. This group has potential to be good. Senior Michael Dunn (left) and sophomore Damian Price (right) are veteran bookends at tackle who are the lone returning starters up front. Price could be something special. The interior is new. Sophomore Brandon Moore is a versatile option at center and a good anchor. Junior Mike Minter was a starter in 2015 before injuring a shoulder. This group will need to be in shape, as the offense wants to run at a quick pace.