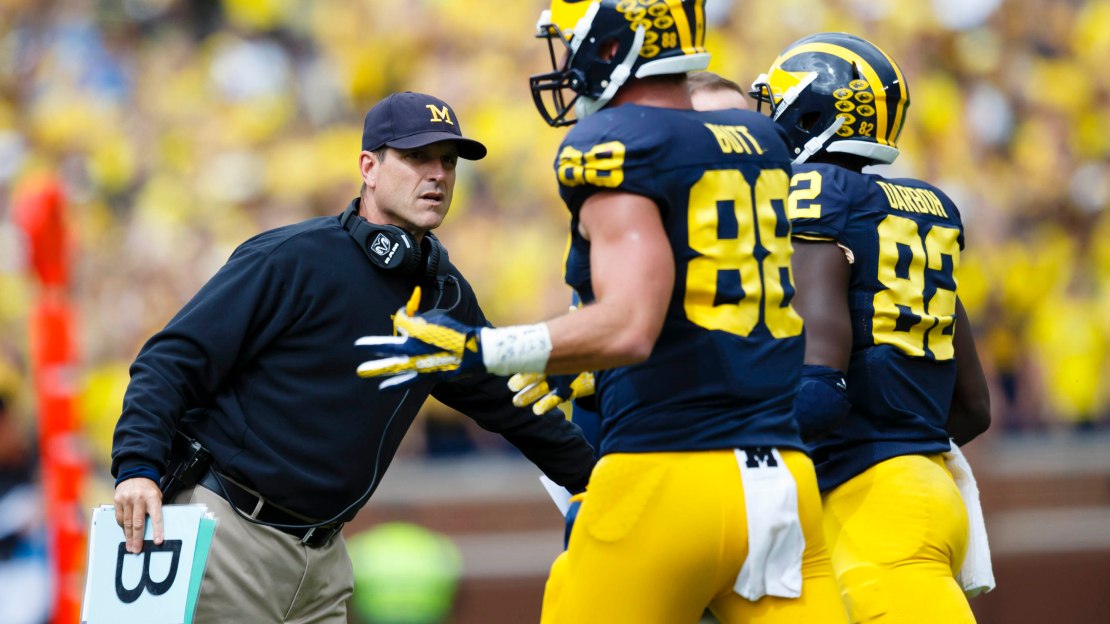 Is Michigan?s Jim Harbaugh getting too much attention? Who will win the Big Ten East? And what?s up with that perceived chip on the shoulder at Michigan State?

I get into all of that-and more–in this super terrific mailbag.

Why do you continue to be a publicist for Jim Harbaugh? Is he paying you to keep his name alive in your columns? The last time I looked, there were 13 other coaches in this league. Do they do nothing? – David Walimaki

OK. I have received several emails along these lines. Seems some in Big Ten Nation are suffering from what I like to call ?Harbaugh Fatigue.? It is a legit medical diagnosis. Google it. It seems every link on the Internet leads to a story about Mr. Khaki pants and his wild-and-crazy exploits. But, you have to agree: Harbaugh is pure entertainment gold. It?s the old P.R. flak?s adage: Love me. Hate me. But don?t ignore me. That?s Harbaugh in a nutshell. We can?t look away. No coach in the Big Ten-or the nation, for that matter-can match the buzz Harbaugh generates. He is college football?s version of the Kardashians. We just can?t get enough ? and we don?t know why.

I can't help but notice that you seem to repeatedly credit Michigan State's success under Mark Dantonio to the proverbial "chip on the shoulder." My first question is: can you explain how this "chip" specifically translates into success on the field. Second, how do you think Dantonio and his team maintain this "chip" year after year? And finally, given the Spartan's recent success, why do think more coaches/teams don't simply develop a "chip on the shoulder" as a means to increased football success? – Matt Volk

The ?chip on the shoulder? that you and others mention is imagery that of course references a perceived lack of respect that Michigan State feels others have for it. Face it, like it or not, the Spartans have operated for years in the shadow of Michigan, which typically has gotten more attention. That has left Michigan State to fight to ?prove others wrong.? The chip on the shoulder (I?ll show you!!) can be effective fuel to motivate people and teams, proving to others that they are indeed just as good-if not better-than perceived. Now, having said all that, the success in East Lansing isn?t all about the ?chip.? There is plenty of talent-and that talent is well-coached. That?s why other schools don?t just ?win? because they have a chip on their shoulder.

I have to go with Ohio State. Yes, I know Michigan State is the defending division champ. And I know the Buckeyes have lots of holes to fill on the offensive and defensive lines, as well as needing skill-position talent to emerge on offense. Still, there is a lot of talent in Columbus. Even better: The Buckeyes have a guy in J.T. Barrett who just may be the top quarterback in the Big Ten. But know this: Ohio State has to play at Michigan State.

How far do you see my beloved Cornhuskers going in the Big Ten this year? And, are they EVER likely to regain premier national status? I don't see it happening. – Robert Seyler

I think Nebraska has a shot to win the West Division, as it searches for its first league championship of any sort since 1999. Keys will be trench play. The o-line has four new starters. The d-line lost some great tackles and needs a pass rusher. Lastly, the progression of Tommy Armstrong is key. Can the staff develop a winning formula for him? He seems better suited as a complementary weapon more so than a guy who is counted on to be the main weapon. Will Nebraska ever be a national power again? Perhaps. But it will be difficult to regain the consistent national glory of the 1990s, given the landscape of today?s college football world with scholarship limits.

I believe Wilton Speight will be the Big Ten breakout player of the year. I like what I've seen. He?s smart, calm and has a good arm. Your thoughts. – David Moser

The Michigan signal-caller looked good when he came in for an injured Jake Rudock and led the Wolverines to victory at Minnesota last year by engineering the game-winning drive. But I still like the upside of Houston transfer John O?Korn. Regardless of who is taking snaps, I get the feeling Jim Harbaugh will get the most out of his quarterback, maximizing his abilities- like he did with Rudock last year. This year?s signal-caller will have a lot of talent around him-as well as a line that is getting better and better. It?s a nice situation.

It's a common misconception that playing off of a bye week is an advantage. But last year after bye weeks, Big Ten teams were 5-9. The WSJ did an article a few years ago that said that Big Ten teams had a winning percentage of .347 off of a bye in league play over an eight-year span. – Hawkeye Ryan

This is interesting. I think sometimes teams are better off continuing to play. When a squad has a week off, it can kill momentum and rhythm that are so key to any season. Yes, the rest of an off week can be key to allowing a club to heal and recuperate. But for years, there never were byes in college schedules-and teams and players seemed to do just fine. The byes are just a modern function of extending the season to accommodate TV executives.