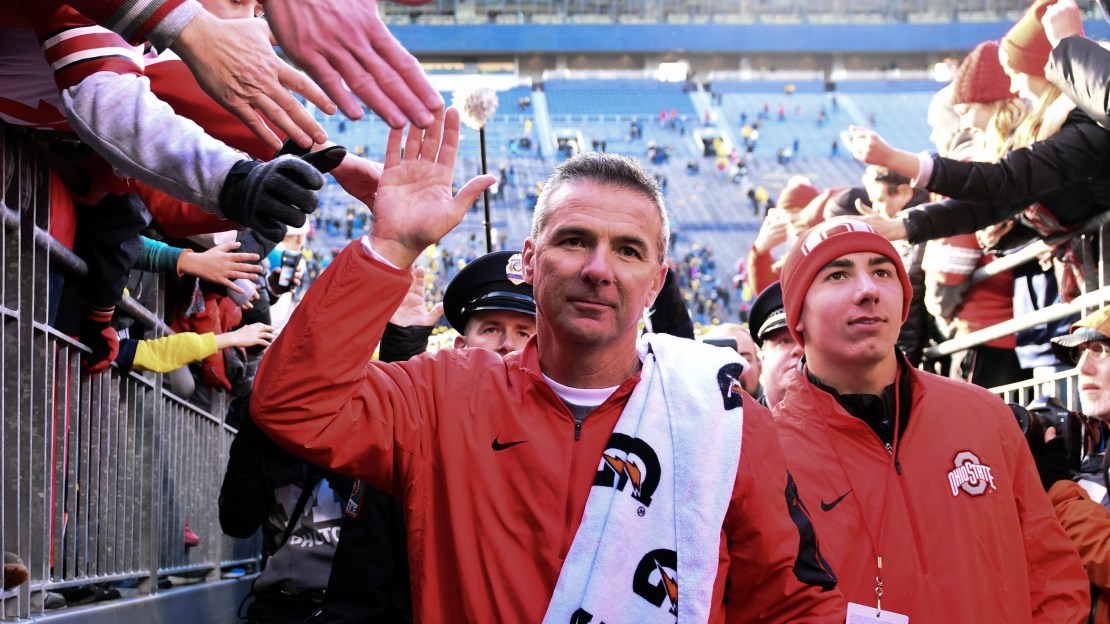 It?s the final week of the season. And, even better, it?s rivalry week! Division titles may be on the line, in addition to cool trophies.

Front and center on this Saturday: ?The Game,? between Ohio State and Michigan. Could the Big Ten East crown be on the line? The Buckeyes have dominated this series of late, going 12-2 since 2001 and winning the last four meetings with a 42-13 triumph last season. The last time Michigan won in Columbus? In 2000, when the Wolverines took a 38-26 decision.

Best game: The Buckeyes need to be careful in the finale on Nov. 26 when Michigan comes to Columbus. Yes, recent history has favored Ohio State in this iconic rivalry dubbed simply ?The Game.? But the Wolverines are on the rise under Jim ?Mr. Satellite Camp? Harbaugh. The Buckeyes have dominated this series of late, going 12-2 since 2001 and winning the last four meetings with a 42-13 triumph last season. The last time Michigan won in Columbus? In 2000, when the Wolverines took a 38-26 decision.

Best quarterback matchup: Iowa?s C.J. Beathard vs. Nebraska?s Tommy Armstrong looks good. Beathard led the Hawkeyes to 12 wins and their first Rose Bowl since the 1990 season last year, hitting 61 percent of his passes with 17 TDs and just five picks. Armstrong was No. 2 in the Big Ten in passing in the Big Ten last year, averaging 252.5 ypg.

Best head coach matchup: It has to be Urban Meyer vs. Jim Harbaugh. Meyer got the best of Jimmy Ballgame last year, making Harbaugh 0-1 vs. Meyer. Urb? He?s still perfect vs. the Wolverines, sporting a 4-0 mark. Let?s just hope these guys hang around for years to come in what could be a coaching rivalry on par with Woody vs. Bo.

Best coordinator matchup: Iowa defensive coordinator Phil Parker vs. Nebraska offensive coordinator Danny Langsdorf. Parker is wily vet who has been at the side of Kirk Ferentz since Ferentz arrived in Iowa City in 1999. He always crafts a tough, disciplined defense. Langsdorf is one of the brightest minds in the Big Ten, helping the Nebraska offense to impressive numbers in his first season. Nebraska finished in the top three in the Big Ten in passing (266.9 ypg), scoring (32.8 ppg), total offense (446.9 ypg) and third-down offense (44.8 %). And the Huskers produced their highest passing total since 2008 with 3,470 passing yards.

Upset alert: Penn State could upend Michigan State when it visits. This would be the signature James Franklin is looking for. And, a win here could send the Nittany Lions to a good bowl game. Michigan State has won the last three meetings and hasn?t lost in State College since 2008. But could the worm turn this season?