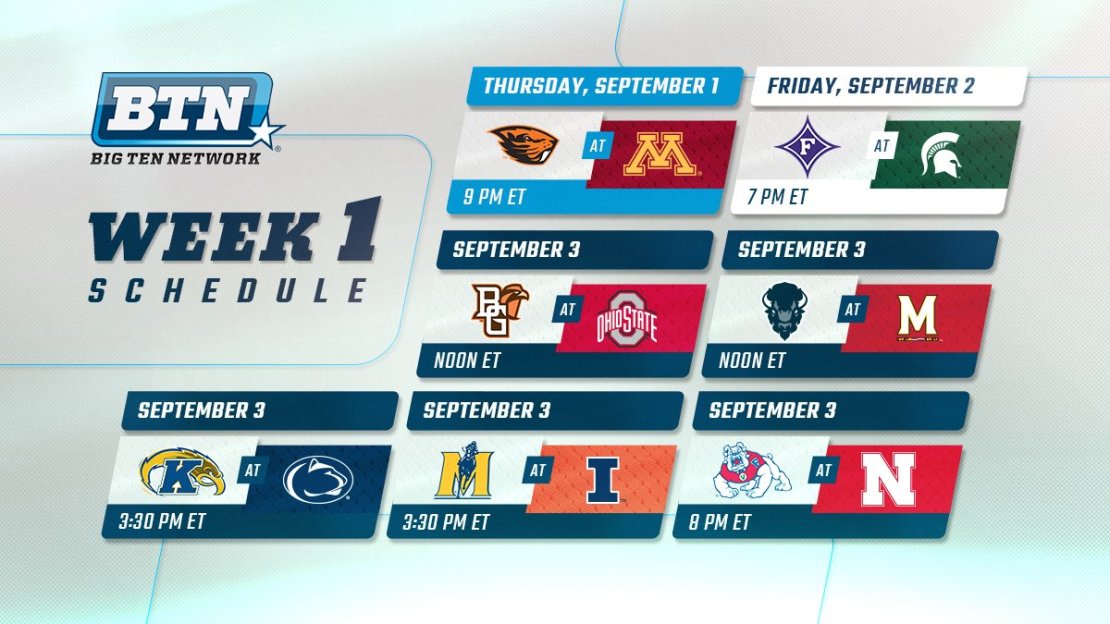 Summer hasn't officially begun, but the build-up and anticipation for the 2016 football season is gaining steam. Adding to the excitement: The release of the first three weeks of BTN games.

BTN will televise 17 games the first three weeks, beginning with seven the opening week and starting with the first game of the season: Oregon State at Minnesota on Thursday, Nov. 1 in a Pac-12-Big Ten clash.

BTN also will be there for the debuts of Lovie Smith at Illinois and DJ Durkin at Maryland in the opening week. Iowa State at Iowa highlights six BTN games in Week 2, as the rivals battle for the CyHawk trophy. Week 3 has four BTN games and is anchored by Colorado's trip to Michigan.

Here is a look at each game BTN will televise the first three weeks of 2016.

Thursday
Oregon State at Minnesota. The Gophers open at home vs. Oregon State and former Wisconsin coach Gary Andersen. Minnesota is 2-1 all-time vs. the Beavers, last playing in 1981. All three games have been in Minneapolis. How will the attack of new Golden Gophers offensive coordinator Jay Johnson function? Will the passing game be better?

Friday
Furman at Michigan State. FCS Furman won't know what hit 'em when the Paladins wade into Spartan Stadium for a Friday night clash with Michigan State to open the season. These schools never have met. How will the new Spartan QB look?

Saturday
Fresno State at Nebraska. Under the lights! The Bulldogs failed to reach the postseason last year. Mike Riley is coming off a tough 6-7 debut filled with many tough losses but looks primed for a break out after a 3-1 finish and bowl win vs. UCLA. The Huskers are 2-0 all-time vs. Fresno State, winning 42-29 in Lincoln in 2011 and 55-19 at Fresno in 2014. This will be our first look at the overhauled Husker lines.

Bowling Green at Ohio State. The Buckeyes are 4-0 all-time vs. the Falcons, outscoring them 120-43. All four meeting have been in Columbus. The last was in 2006-and all have been since 1992. Forgive Urban Meyer if he gets misty-eyed, as he began his head coaching career at Bowling Green in 2001. Now, 15 years later, he's a legend.

Murray State at Illinois. The much-anticipated Lovie Smith era begins with a visit from the Racers. These schools never have met. America will be eager to see the schemes the Fighting Illini are running.

Kent State at Penn State. James Franklin begins his third season in State College looking to take the Nittany Lions to the next level. This may be the year Penn State breaks out under Franklin. Penn State is 4-0 all-time vs. the Golden Flashes, shutting them out the last two meetings, 24-0 (2010) and 34-0 (2013).

Howard at Maryland. The D.J. Durkin begins with a visit from FCS Howard. How will the offense look? Defense is Durkin's specialty, so it will be interesting to see that unit looks as he begins to put his stamp on the program.

Cincinnati at Purdue. Purdue is 1-1 vs. Cincinnati, with both games in the Queen City. The Boilers won, 19-14 in 2001 and lost 42-7 in 2013. The visit from Cincinnati will be tough for Purdue. UC was the first opponent for Darrell Hazell at Purdue back in 2013 ? and the Bearcats throttled the Boilermakers. The Bearcats are well coached under Tommy Tuberville, who has taken the program to bowls in each of his three seasons. Still, the Boilermakers may have a shot to ambush UC if both lines have come together and the quarterback play is solid.

Howard at Rutgers. The visit from FCS Howard will be as easy as it gets for the Scarlet Knights under first-year coach Chris Ash. It will be fun to check out the go-go offense of 28-year old coordinator Drew Mehringer.

Akron at Wisconsin. The Zips are one of the better programs in the MAC, led by Terry Bowden. The former Auburn coach is coming off an 8-5 season and bowl win. The Badgers-who will have a new signal-caller–will need to avoid a letdown coming off a big opening game vs. LSU in Green Bay's Lambeau Field.

Illinois State at Northwestern. The Redbirds are one of the nation's top FCS programs under Brock Spack, who is 56-29 at Illinois State with three playoff appearances in seven seasons and a trip to the title game in 2014. And you know ISU would love to knock off an in-state foe. This will be a coaching clash between All-Big Ten linebackers, as Spack starred at Purdue and Pat Fitzgerald at NU.

North Carolina at Illinois. Here's a great test for first-year coach Lovie Smith. And it will be at night. Last year, the Illini waltzed into Kenan Stadium and got thumped, 48-14. That was a very good UNC squad that finished 11-3 and won the ACC Coastal Division. This will be a good litmus test for Illinois' new regime. Can the Illini compete with an established non-league foe and avoid a blowout?

Iowa State at Iowa. The battle for the CyHawk will be under the lights. This year, the Cyclones are led by new coach Matt Campbell, a 36-year-old wunderkind who had big success at Toledo in going 35-15 overall and 24-8 in the MAC with four bowls in five years. Kirk Ferentz? He's 60 years old and in his 18th season in Iowa City. Know this: Ferentz is just 8-9 vs. the Cyclones.

Temple at Penn State. Last season, the Owls dumped Penn State, 27-10, to end a 39-game winless streak vs. the Nittany Lions that dated to 1941. No doubt, James Franklin and the Nittany Lions will be motivated to pay back the Owls, who have a good coach in Matt Rhule-a State College, Pennsylvania, native and former Penn State linebacker.

Georgia State at Wisconsin. The Badgers never have played Georgia State. This will be a chance for Wisconsin to get tuned up before beginning a rugged start to the Big Ten season that goes at Michigan State, at Michigan, Ohio State, at Iowa, Nebraska, at Northwestern.

Colorado at Michigan. Michigan welcomes Colorado, as the Buffaloes are the lone Power Five school on the non-league slate for the Wolverines. But, this isn't Bill McCartney's CU, as the Buffs have been a floundering program for years, not going to a bowl since 2007 when Dan Hawkins was coach. Current boss Mike MacIntyre is 10-27 in three seasons in Boulder. The Buffs' Hail Mary 27-26 win in Ann Arbor in 1994 will forever be remembered by Michigan fans. CU last visited in 1997, falling 27-3, with Rick Neuheisel as coach.

Duke at Northwestern. The Wildcats invaded Durham, N.C., last year and took a 19-10 decision to help spark a 10-win NU season. That was a good Blue Devil squad that would go on to cap an 8-5 season with a win vs. Indiana in the Pinstripe Bowl, the program's fourth postseason trip in succession. David Cutcliffe always has a solid team. Will the Wildcat offense have more balance in 2016?