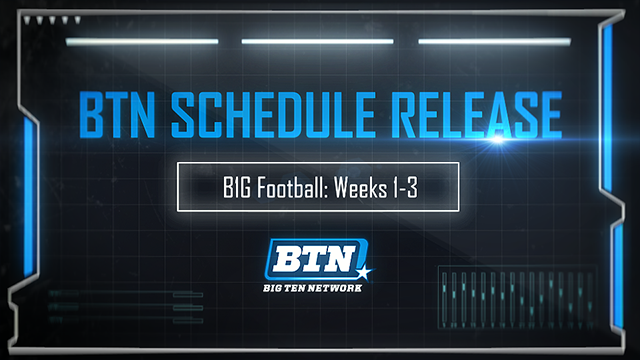 BTN today announced its first 17 games of the 2016 football season, featuring seven teams that finished last season ranked in the final AP Top 25 poll to go along with five Power 5 conference matchups. The lineup includes Temple at Penn State, Colorado at Michigan, Iowa State at Iowa and Duke at Northwestern.

Week one starts on Thursday, Sept. 1, with seven games across three days beginning with Oregon State at Minnesota at 9 p.m. ET. BTN will also televise the home openers of Michigan State, Ohio State, Penn State and Nebraska to round out the weekend.

Week two is home to a loaded Saturday, featuring six games on BTN. Lovie Smith makes his primetime debut with the Fighting Illini in a rematch against North Carolina, while Iowa will host Iowa State in a battle for the Cy-Hawk trophy.

Week three features a group of familiar opponents, as Penn State hosts Temple in Happy Valley and Colorado returns to Ann Arbor to take on the Wolverines. Last season, Temple defeated Penn State for the first time since 1941. Prior to the 2015 game the Nittany Lions had dominated the Owls, running up a record of 38-0-1 since the previous loss. Later that day the Buffaloes return to the Big House for the first time since 1997, a 27-3 win for the Wolverines, a less dramatic affair than when the two teams met in Ann Arbor for 1994?s ?Miracle at Michigan.?

All games can also be streamed via the web, smartphones, tablets and connected devices on BTN2Go, BTN?s digital extension.