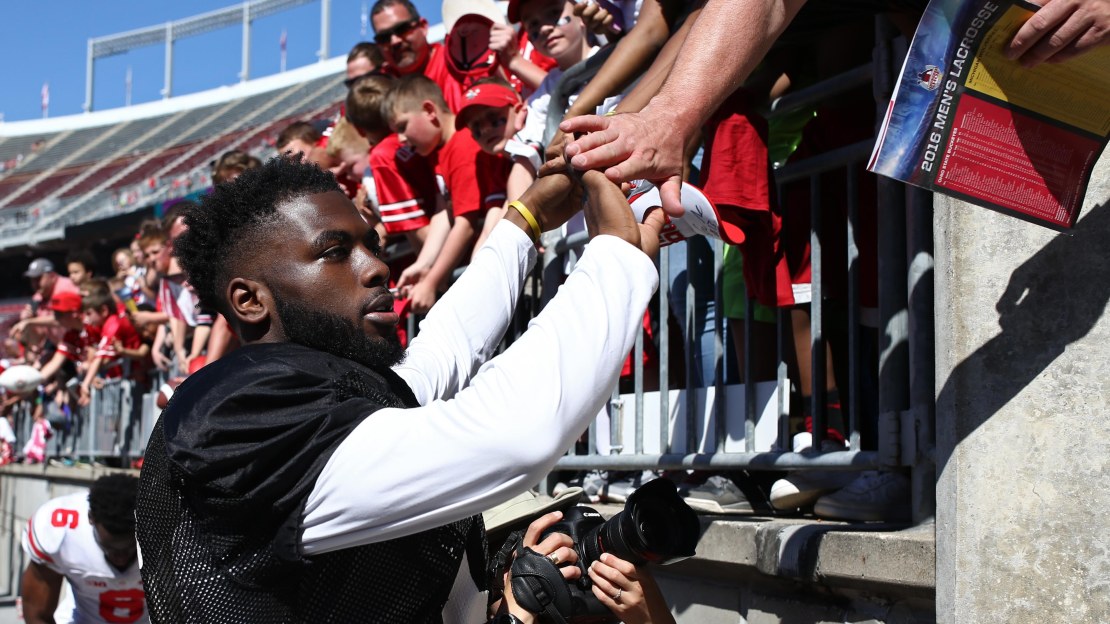 Let's get things going with something simple and informative: A video from Campus Insiders ranks the Top Three Big Ten QBs.

I promised you a Jim Harbaugh link each day. And, I continue to deliver. The latest: Captain Jim says the NCAA is making rules up as it goes along.

Michigan is prohibited, by NCAA rule, from publicizing its appearances at camps. Per the Baltimore Sun's Jake Lourim, Harbaugh said: "(The) NCAA made a rule yesterday that we're not allowed to take pictures (with) you guys at camps. They're making them up as they go along."

Wait: This is your lucky day: I have another Harbaugh link. Here, he says Michigan is fighting a prejudice against it. But he won?t be giving up.

Earlier this week, speaking with CSN Mid-Atlantic, Harbaugh explained how he believes certain people are against the game he coaches, which, in turn, compels him to fight for football on every level.

"There's no doubt that there's a prejudice against football, at the pro level, the college level, the high school level, the youth level. (Some people) have something against football. We'll overcome it, though," Harbaugh said. "People are against football. I kind of see it that way. Let's take lacrosse for example. A white sport, a rising, affluent sport. They recruit them in the eighth grade, they have a dead period for a few days in August, it's a totally different situation.

"It bothers us. But if it's a test of wills, we're going to fight for youngsters, their student-athletes, their families and the game itself."

Michigan State is adding a transfer from Buffalo in tight end Matt Seybert.

Tight end has been a big position of strength for the Spartans under Mark Dantonio. This guy should help.

"This area (Lehigh Valley), if you look historically, Penn State has produced a bunch of really good players that have come here. We want to build on that. I think it helps when you get a guy like Saquon Barkley, who comes and does so well," Penn State coach James Franklin said during a media session following his speech at Lauren's First and Goal Camp on Sunday. "And Saquon's been very vocal on Twitter and other things about the best decision he ever made was coming to Penn State. I think that helps.

?Now, young kids who are growing up watching Saquon, watching Penn State that say, 'I want to do that as well.' So yea, I think it's very helpful. And I'm a big believer if you can stay close to home and get everything you are looking for academically, athletically, socially, why wouldn't you?"

Barkley is a special guy. In fact, the Nittany Lions have a raft of good, young backs. Now, will the o-line develop?

It?s official: Ohio State will start football camp on August 7. What?s amazing is this will be Urban Meyer?s fifth camp in Columbus. There will be no lack of motivation for a program that failed to live up to its own lofty expectations by not returning to the College Football Playoff a year after winning the national championship.

The Buckeyes open the 2016 season at Ohio Stadium on Sept. 3 against Bowling Green. And there will be no quarterback controversy like there was last year. I think this OSU team will be very dialed in.

Nice to see Quinn Buckner named to Indiana?s board of trustees. Is there a better human on the planet?

Buckner will serve a three-year term.

"I?m humbled, to tell you the truth," Buckner told IndyStar recently. "It?s an honor, and a great opportunity to work with IU and with the citizens of the state of Indiana. I?m glad to be able to be a part of that entity."

Northwestern recently held an inaugural awards ceremony. InsideNU.com didn?t get access to the gala. But, it still had some fun, handing out its own NU awards. I love it!

Congrats to former Hoosier big man Cody Zeller on earning spot on the USA Men?s Select Team. He always was one of my favs. Just busted his butt and never really chased the spotlight.

Some other Big Teners made it: D?Angelo Russell, Denzel Valentine and Gary Harris.