Best of Week 9: It's Michigan vs. Michigan State week! 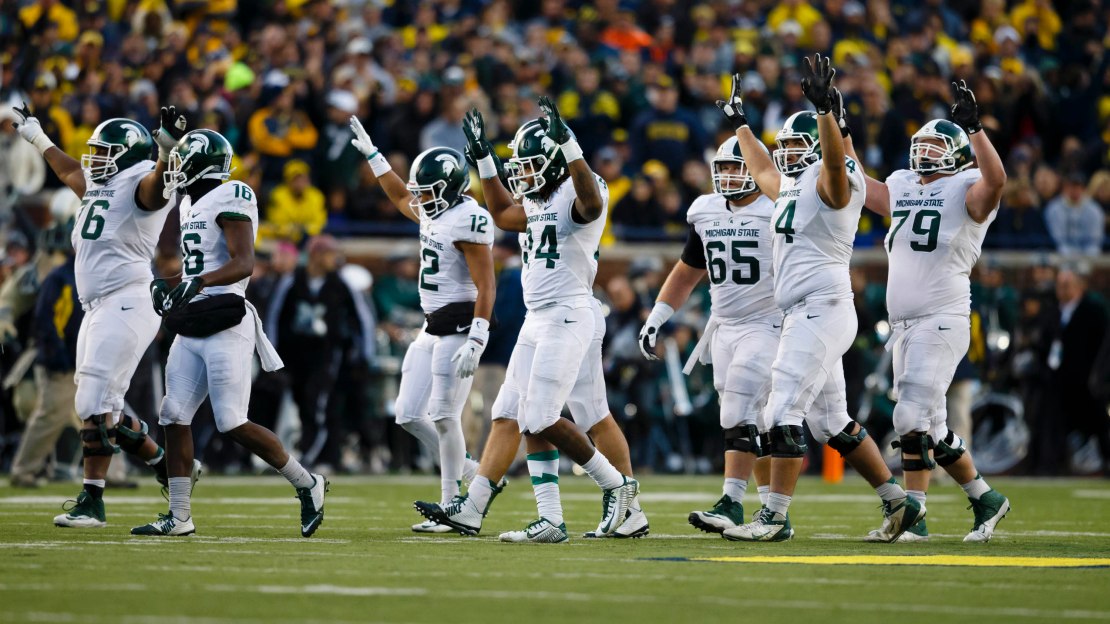 Welcome to Week 9, which has a couple of hefty matchups with Michigan at Michigan State and Nebraska at Wisconsin. And, Northwestern?s trip to Ohio State could be compelling, too. This could be a season-defining Saturday, which features six games.

Two schools are off: Iowa and Rutgers.

Game of the week: It doesn?t get much better than Michigan-Michigan State. If the Spartans want to repeat as East champs, they need to dispatch hated rival (and fast-rising) Michigan when the Wolverines visit East Lansing. The Spartans are 7-1 in the last eight games vs. Michigan, which hasn?t won in East Lansing since 2007. Michigan owes the Spartans after losing one of the wildest games in college football annals last season when Wolverine punter Blake O?Neil fumbled a snap with 10 seconds left and the Spartans? Jalen Watts-Jackson made the play of his life by returning it for a touchdown and a 27-23 win on the game?s final play.

Best quarterback matchup: Nebraska?s Tommy Armstrong vs. Wisconsin?s Bart Houston, who figures to win the job with Joel Stave gone. Armstrong could be primed for a big senior season in a career that has been marked by inconsistency. No doubt, Armstrong is a terrific athlete, but accuracy and decision making have been issues. Can the staff develop a winning formula for him? Armstrong has plenty of experience and is a primo athlete, but he still makes some dubious decisions with the ball. He had 16 picks last year; he has 53 career TD pass and 36 picks. Houston has bided his time in Madison and looks like a guy who is capable of executing Paul Chryst?s offense.

Best head coach matchup: Gotta be Jim Harbaugh vs. Mark Dantonio. This is a beaut. Harbaugh is the big gun. He?s brash, bold and determined to make the Wolverines a champion. To do so, Harbaugh must find a way to beat Dantonio, the current king of Michigan. Let?s just hope we get to watch these guys match wits for several more years.

Best coordinator matchup: The clash between Northwestern defensive coordinator Mike Hankwitz and Ohio State offensive coordinators Ed Warinner and Tim Beck should be good. Hankwitz has done a good job building his unit in Evanston. In fact, this may be the most dynamic and athletic Wildcat defense ever to stroll campus led by linebacker Anthony Walker, a sure-fire NFLer. The Buckeyes will have a top signal-caller in QB J.T. Barrett but a rebuilt cast of skill-position players. Can Warinner and Beck get these guys developed quickly? No doubt, they will have a lot of talent to mold and build around.

Upset alert: Maryland should have a good shot to win at Indiana. The Terps won the last time they visited Bloomington, taking a 37-15 decision in 2014. A big key will be how well the Maryland quick-pace offense is playing under new coach D.J. Durkin. The Hoosiers also have concerns on offense, as IU will have a new quarterback and lost some key offensive linemen. And will new DC Tom Allen make a difference? It could be humming by late October.