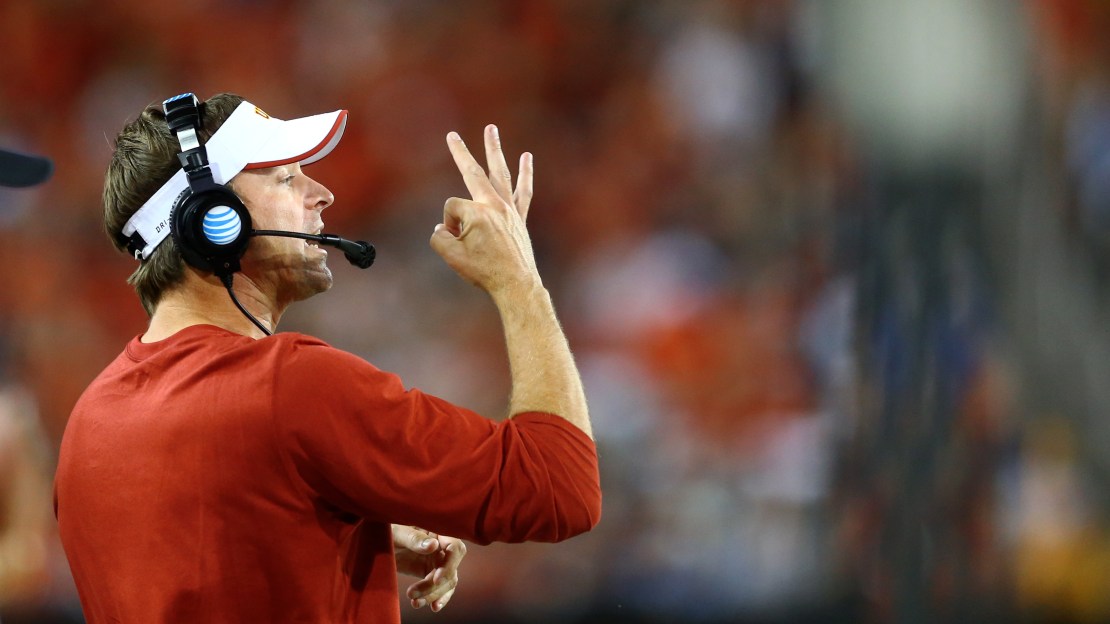 Paul Chryst enjoyed a strong debut at Wisconsin last season and one of the big reasons a stellar defense led by coordinator Dave Aranda. Now, Aranda is gone having left for a big raise to lead the LSU defense. Chryst responded by tabbing former USC defensive coordinator Justin Wilcox, one of the biggest assistant coaching hires by any Big Ten school in the offseason.

1. Wisconsin defensive coordinator Justin Wilcox. No school suffered a bigger blow than the Badgers, who saw defensive coordinator Dave Aranda leave for the same post at LSU-and who lot more money. Aranda was considered by many to be one of the top DCs in the nation. In his three seasons in Madison, Aranda ran a defense which gave up 16.9 points and 289.4 yards per game. Wilcox will run a similar system and have multiple fronts like Aranda, able to morph from a 4-2-5 into different looks.

Wilcox brings lots of coordinator experience to Madison, having run defenses at USC (2014-15), Washington (2012-13), and Tennessee (2010-11). Wilcox was fired after the 2015 season after USC finished 65th in the nation in total defense, allowing 400.8 yards per game. The Trojans ranked 41st against the run and 93rd against the pass. The Trojans allowed 25.7 points per game, good for 50th in the FBS. To keep the 2015 mojo going in hopes of getting back on top in the West, Wilcox needs to keep the defense playing at a high level. Lots of pressure.

The offense needs more bite if Minnesota wants to contend in the West. Another key change: Claeys tabbed Bart Miller to coach the offensive line. Miller coached the line at Florida Atlantic the last two years. He coached Wisconsin?s line in 2012 after Mike Markuson was fired after just two games of the season.

3. Nebraska defensive line coach John Parrella. The former Husker is back home. And he brings an unmatched passion for the school-and the position, taking over for Hank Hughes. Parrella had been the defensive line coach at Division II Northern Michigan since 2014. While Parrella lacks experience, Mike Riley is familiar with him. During Parrella?s 12-year NFL career, he played for Riley and Husker defensive coordinator Mark Banker with the San Diego Chargers. Parrella is the ultimate Husker.

He went from being a walk-on tight end from Grand Island Central Catholic to becoming one of the best defensive linemen in the nation by his senior year. He will need to develop a line that lost one starter (Jack Gangwish) to graduation and two more starters (Maliek Collins and Vincent Valentine) who declared early for the NFL draft. The front is the biggest issue on the Husker defense.

Hazell promoted tight ends coach Terry Malone to run the offense, a role he had with Michigan under Lloyd Carr from 2002-05. But the arrival of Ross Els as defensive coordinator was the biggest hire by Hazell. Els was coaching high school ball in Nebraska last year. The four years before that, Els coached linebackers at Nebraska for Bo Pelini. He must rehab what was a horrid defense. How bad was it last year? The Boilers were No. 13 in scoring defense (36.5 ppg); No. 12 in total defense (458.3 ypg); last vs. the run (214.9 ypg); No. 12 in pass-efficiency defense. Unless this group improves, Purdue will struggle to better its record.