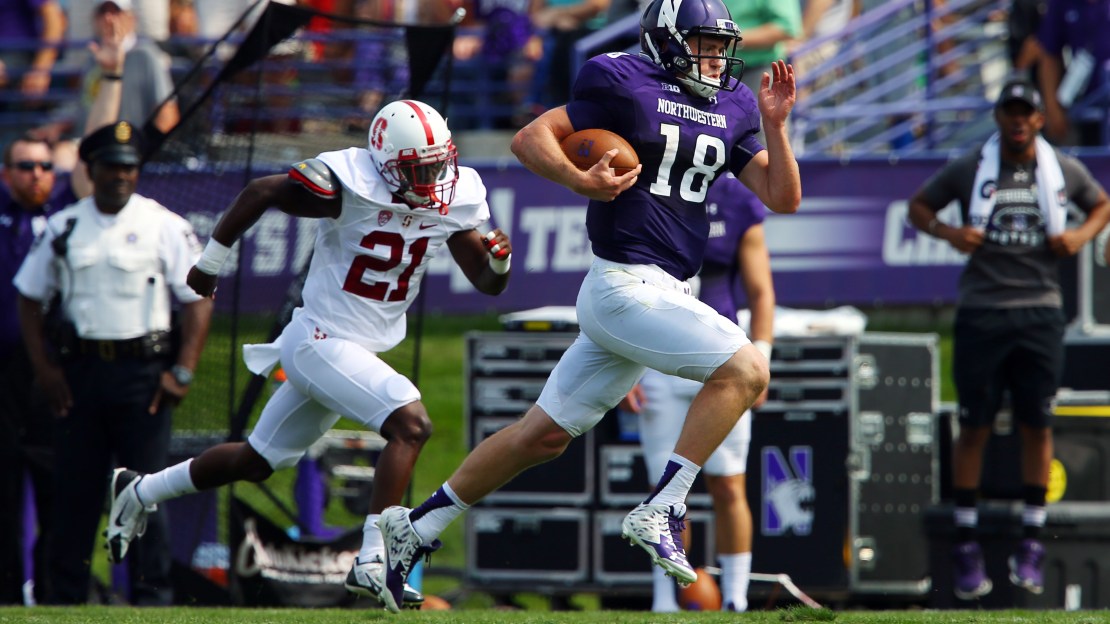 Northwestern is coming off a stellar season that saw the Wildcats win 10 games. And NU is thinking big in 2016 as it looks to win what looks like a wide-open Big Ten West. And, it just may happen, as this could be Pat Fitzgerald?s most talented team yet. But it faces a daunting schedule that offers little relief.

Toughest non-conference game: vs. Duke, Sept. 17. The Wildcats waded into Durham, North Carolina, last year and took a 19-10 decision. This was a good Blue Devil squad that would go on to cap an 8-5 season with a win vs. Indiana in the Pinstripe Bowl, the program?s fourth postseason trip in succession. David Cutcliffe always has a solid team.

Toughest conference game: at Ohio State, Oct. 29. No doubt, circle this date. The Buckeyes lead the all-time series, 60-14-1. The Wildcats? only win since 1971 came in 2004 in Evanston under the late Randy Walker. This will be NU?s first trip the Horseshoe since 2007, a 58-7 beat down administered by Ohio State.

Who they don?t play: Michigan, Penn State, Rutgers and Maryland.

Easiest game: vs. Illinois State, Sept. 10. There is no layup, so let?s go with the visit from the Redbirds. Illinois State is one of the nation?s top FCS programs under Brock Spack, who is 56-29 at Illinois State with three playoff appearances in seven seasons and a trip to the title game in 2014. Yeah, Northwestern faces a tough 2016 schedule.

Toughest stretch: The Big Ten season opens with a bang, as Nebraska comes to Evanston followed by a trip to Iowa and then a game at Michigan State. The Nebraska vs. NU series has been one of the Big Ten?s best of late. Since joining the Big Ten, the Cornhuskers are 3-2 vs. the Wildcats, losing last year in Lincoln. The games have been fun, with Northwestern stunning Nebraska in Lincoln in 2011 with a backup QB. The Huskers won by a point the next year and then needed a Hail Mary to win in 2013. The Wildcats have lost three in a row to Iowa including the last three in Kinnick; NU last won in Iowa City in 2009. Northwestern is 1-5 in its last six vs. the Spartans, but the Wildcats won the last time they were in East Lansing (2012).

Best chance to be upset: vs. Western Michigan, Sept. 3. The Wildcats need to be careful in the season opener when the Broncos visit Evanston. Broncos boss P.J. Fleck is an up-and-coming coaching fireball who always preaches to ?row the boat.? He played at Northern Illinois, is a native of the state and has his Bronco program rolling. You know the 35-year old would love to topple the Wildcats. Fleck has taken his team to consecutive bowls and 8-5 records and won the MAC West in 2015.

Best chance to pull an upset: at Iowa, Oct. 1. Northwestern could waltz into Kinnick Stadium and topple the Hawkeyes, who have won the last three vs. the Wildcats. A big key for NU will be how well QB Clayton Thorson is playing; he needs to inject life into what has been a pedestrian passing game. For what it's worth, however, Iowa blasted Northwestern, 40-10, last year at Ryan Field.

Must win: vs. Wisconsin, Nov. 5. The Wildcats must protect their home field if they want any shot at winning the West. And that means beating visiting Wisconsin on Nov. 5. Northwestern has had success vs. the Badgers under Pat Fitzgerald, going 3-3 and winning the last two games and the last four in Evanston. UW hasn?t won at Ryan Field since 1999.

Bye week: It comes on Oct. 8, after the Wildcats have played five games. The timing is good, as the off week comes between a visit to Iowa and a trip to Michigan State. Both games figure to be tough, physical matchups.