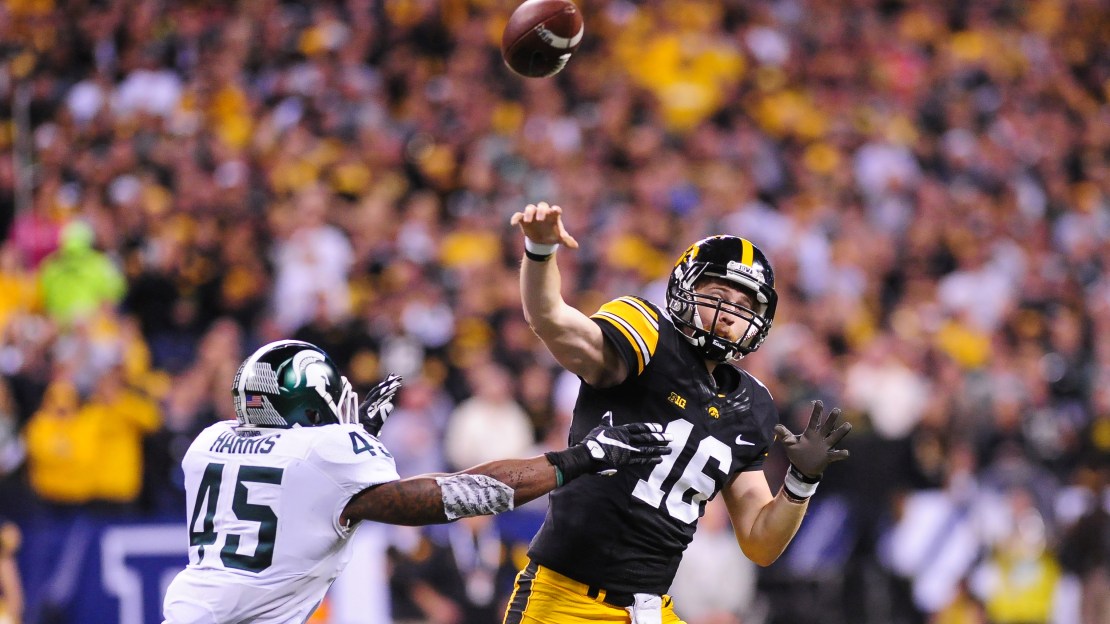 Time to reach into my Big Ten Mailbag. Can Michigan go 12-0? Is Iowa a national title contender? Will any true freshmen play for Nebraska in 2016?

I look at those questions and others below. Let?s go!

I think that Michigan can go 12-0 this season. Michigan isn?t deep at linebacker and along the defensive line. But the Wolverines are strong in the secondary, receiver, d-line and tight end spots. – Ben

I am very high on Michigan, too. But, I?m not so sure the Wolverines will go 12-0. I could see Michigan going 10-2 or 9-3. The fact Jim Harbaugh is breaking in a new quarterback is a bit of a worry. And the schedule includes road games at Michigan State and at Ohio State. And a game at Iowa is very dangerous, too, not to mention a visit from Wisconsin.

Do you think Iowa can go to the national title game if C.J. Beathard can stay healthy? – Martin Salinas

Iowa? The national championship game? In 2016? I don?t think so. Look, I love what Kirk Ferentz has done in Iowa City. And his work last year was stunning, as the Hawkeyes raced out to a school-record 12-0 start to win the West division before losing the Big Ten title game and Rose Bowl. I think Iowa will repeat as West champ, but I don?t see the Hawkeyes winning the Big Ten ? let alone getting to the national championship game. Last year was the best shot for that happen.

In your analysis of Maryland?s schedule, you you have no mention of the Penn State game. Too funny. Why not? – Gene

The game with Penn State is shaping up as a brewing rivalry. The meeting in 2014 remains memorable, as the Terps refused to shake hands at the coin toss ? and then Maryland went out and beat PSU. I just felt there were other games on this year?s Terps? slate that looked tougher ? at Michigan ? vs. Ohio State ? at Nebraska ? vs. Michigan State. And the Penn State game doesn?t take place during any tough stretch, as it comes between visits from Purdue and Minnesota. So, I stand by my analysis.

Who do you see, if anyone, stepping up in Nebraska?s 2016 recruiting class who could make a big difference in 2016? – Jay Banta

WR Derrion Grim and QB Patrick O?Brien both arrived early. But O?Brien figures to redshirt. And Grim faces a loaded corps of wideouts. In fact, this looks like one of the Huskers? best receiving units in years. But the one true freshman who figures to play is Lamar Jackson, who was rated the No. 1safety in the nation by rivals.com.

What are your realistic expectations for Nebraska this year in the B1G and nationally? I'm a huge Nebraska fan, so give me some hope and belief for something amazing this season with your generous prediction. – Max Kuzela

I like Iowa to win the West, but I think Nebraska could come out on top if it develops. A big key will be how well both lines come together. The Huskers also need to commit to the running game and get QB Tommy Armstrong to limit mistakes and make the plays he needs to make in the passing game, working with a strong set of wideouts. NU ended last year 3-1 in its last four games, so this team has some mojo. In the end, best-case, Nebraska goes 9-3. Worst case, 7-5.

I think North Dakota State will beat Iowa when it visits this season on Sept. 17. The Bison will bring a smash-mouth, control-the-clock game to Kinnick and won?t be afraid at all!! – Lakebison

The Bison are better than many FBS squads, winning the last five FCS national championships. North Dakota State has toppled the likes of Kansas State, Minnesota, Iowa State and Kansas in recent years. Yes, QB Carson Wentz-the No. 2 pick in the 2016 draft-is gone. Still, the Bison will be a tough out. But I think Iowa will find a way to get the ?W.?

What are your predictions this season for the Spartans? How do you like our chances repeating as Big Ten champs? – Abdel Rahman

I think MSU has a good shot to repeat, but some big questions need to be answered. I think Tyler O?Connor will be OK as the new quarterback. The big key will be how well lines on both sides of the ball develop, as key players like OT Jack Conklin and DE Shilique Calhoun are gone-among others. MSU?s cause is helped greatly by playing Michigan and Ohio State at home. The Sept. 17 game at Notre Dame will tell us a lot about the Spartans? chances. Bottom line: Michigan State could repeat.