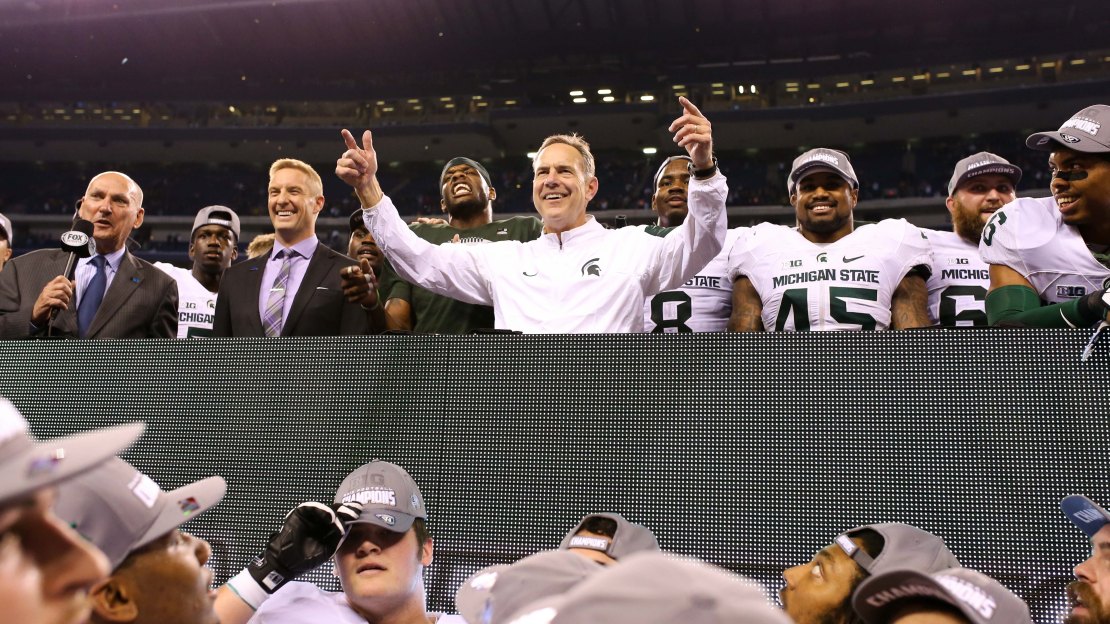 If you are an Illinois football player and you own a scooter ? you won?t for long. Lovie Smith is banning scooters. It?s all in the name of safety.

Bob Asmussen of the Champaign News-Gazette says an estimated two-thirds of the Illini players own a scooter or moped. On practice days, the two-wheel rides fill the alley behind Memorial Stadium. I wonder how this will go over with the players.

Mike Griffith of Mlive.com looks at how Michigan State?s recruiting/NFL draft production compares to in the Big Ten.

This is amazing stuff: The Spartans are the only program in the nation to finish ranked in the top 6 of the AP Top 25 poll each of the past three seasons, and Mark Dantonio became the first coach in Big Ten history to win 11 games or more five of six seasons. He did so despite not having a recruiting class ranked in the top 20 — until the most recent one (2016) — and having half the amount of NFL draft picks as the other elite teams that have been winning at a similar clip.

And this: Michigan State has won two of the past three Big Ten championships, even though the Spartans have had 10 players drafted in that span to Ohio State's 23.

The Nittany Lions have a nice collection of RBs for 2016, led by Saquon Barkley and youngsters Andre Robinson and Mark Allen. Do they really need to play Sanders this fall? I say redshirt him.

On the subject of Penn State, have you seen how much weight former o-lineman Miles Dieffenbach has lost? He looks like a different man.

Dieffenbach was listed at 303 pounds on his last known bio page for the Pittsburgh Steelers, which would put him in the neighborhood of 200 pounds now, according to Pennlive.com. He lists his current profession as a research analyst at CBRE, a self-described worldwide leader in real estate services. I am amazed at how these guys can get so big ? and then so small.

"They're obviously a great organization," Ash said. "There's been a lot of former players at Rutgers go through that organization so any time I get an opportunity to go visit with somebody that's had success, I'm going to take advantage of it."

He added: "It's like anything else, you just go and you talk to them. Ask questions about stuff. It's just professional development that everybody does. You can sit here and watch film and you can sit here on the phone, but it's another thing to be able to go and spend a day and just look at the work environment, walk around the facility and see if there are things that you can pick up that you can take back with you."

I love how Ash has hit the ground at Rutgers. I think this is gonna work out just fine.

HawkCentral.com has a good chat with one of my favorite coaches: Iowa DC Phil Parker, one of the most underrated assistants in the nation.

More on Michigan?s Australian satellite camp: It won?t be just about the kickers.

Really? This seems like one of the most absurd things I have heard of in all my years covering college football. The entire satellite camp issue is overblown, over covered and most of all ? overrated.

Work is underway on Purdue?s new $65 million football complex, which will be finished in August 2017. This is gonna be nice. And, it is much needed.

Everyone in Bloomington watches, waits and wonders: Will James Blackmon stay in the NBA draft?

Should Blackmon leave-which I think would be a mistake, given the fact he is coming off injury-IU will be just fine with guys like OG Anunoby and Thomas Bryant. I mean, the Hoosiers won the Big Ten with Blackmon out for most of last year.